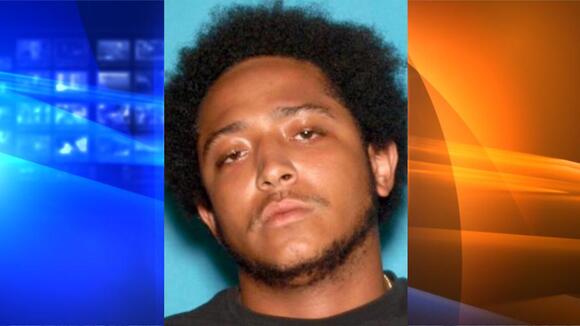 Police are searching for a man in the attempted murder of two international tourists during a bar brawl in Venice Beach.

The suspect has been identified as Brandon Manyo Dixon, who should be considered armed and dangerous, said Los Angeles Police.

The incident happened on July 30, 2022, when the suspect and his friend began verbally arguing with two tourists from the United Kingdom. The argument took place outside a “heavily populated” bar in the 20 block of Windward Avenue, police said.

The argument escalated into a physical fight and that’s when Dixon allegedly chased after the tourists while firing a handgun, authorities said.

Both victims were shot while running away and sustained significant wounds. They were transported to a local hospital for treatment.

The suspect, however, ran away from the scene and remains at large.

LAPD released security footage of the fight taking place outside of a Venice bar.

Anonymous tips can be submitted by calling L.A. Regional Crime Stoppers at 1-800-222-8477 or online at www.lacrimestoppers.org.

A man has been arrested for allegedly trying to kidnap a girl who was walking home from school in Riverside County. The incident has left parents shaken and concerned for their children’s safety as the attempted kidnapping happened less than two miles away from two Moreno Valley schools. The victim, a 12-year-old girl, was walking […]
RIVERSIDE COUNTY, CA・2 DAYS AGO
KTLA

Two teenagers were arrested on Friday after a man was found shot to death in Long Beach. The suspects were identified as a 15-year-old boy and a 16-year-old boy, according to Long Beach police. The victim was identified as Isaiah Saucedo, 20, from Long Beach. On Jan. 6, officers responded to the 5500 block of […]
LONG BEACH, CA・2 DAYS AGO
KTLA

Three people have been arrested in connection with a shooting that left one man dead and another injured in Santa Ana last month. Around 1:45 a.m. on Dec. 18, one victim with a gunshot wound to the abdomen was driven to a hospital by a friend. The friend told medical staff that another victim was […]
SANTA ANA, CA・2 DAYS AGO
KTLA

A man was found shot to death at a luxury high-rise apartment in downtown Los Angeles Sunday night and police said he might have been killed during a possible shootout inside a unit. The incident was reported around 6:30 p.m. at 1000 W. 8th St., Los Angeles police officials told KTLA. Responding officers found a […]
LOS ANGELES, CA・8 HOURS AGO
KTLA

String of restaurant burglaries are caught on video in Long Beach

Three business owners who had their restaurants broken into over the weekend believe the same man is responsible for the caught-on-video break-ins. They took to social media and shared the surveillance videos, hoping someone can identify the burglar. Jason Winters, owner of Speak Cheezy pizzeria, said he was robbed, not only of his peace of […]
LONG BEACH, CA・1 HOUR AGO
CNN

CNN's Nick Valencia reports on the arrest of 5 Memphis police officers charged in the death of Tyre Nichols and speaks with Bennie Cobb, a family friend of one of the officers.
MEMPHIS, TN・3 DAYS AGO
KTLA

Authorities search for woman, 22, who disappeared in Los Angeles County

Authorities are searching for an at-risk woman who disappeared in Los Angeles County on Thursday. Chelsea Roisin Celiz, 22, was last seen on the 8400 block of Olney Street in Rosemead around 11:15 p.m., according to the Los Angeles County Sheriff’s Department. Celiz is diagnosed with bipolar disorder and requires medication, officials said. She is […]
LOS ANGELES COUNTY, CA・1 DAY AGO
KTLA

Two women were arrested for allegedly ransacking drugstores in Ventura County on Saturday. The suspects were identified as 26-year-olds Kayla Thomas and Imani Adedji from Los Angeles, according to Simi Valley Police. Officers responded to a shoplift in progress at a CVS store at 4440 Alamo Street in Simi Valley around 4:09 p.m., police said. […]
VENTURA COUNTY, CA・1 DAY AGO
KTLA

Police have identified a man found dead on an Anaheim street on Thursday. The victim has been identified as Rolando Delgadillo Gutierrez, 31, by the Anaheim Police Department. Officers responded to reports of a collapsed person on East Street just south of the 91 Freeway around 7:20 a.m., said police. When police arrived at the […]
ANAHEIM, CA・22 HOURS AGO
KTLA

Man found dead in Anaheim may have been assaulted; police seek people who tried to help

A homicide investigation is underway Thursday after a man who was possibly the victim of an assault was found dead in Anaheim. Around 7:20 a.m., police responded to East Street south of the 91 Freeway regarding a man bleeding in the street. The victim was taken to a hospital where he was pronounced dead. Anaheim […]
ANAHEIM, CA・3 DAYS AGO
KTLA

A 31-year-old man has been arrested in connection with a hit-and-run crash that left two brothers dead in South Los Angeles earlier this month. Taylor Lee Harris was arrested and booked last week on suspicion of murder in the death of the two boys, who were 13 years old and 18 months old, the Los […]
LOS ANGELES, CA・4 DAYS AGO
KTLA

Authorities are investigating after a body was discovered near an Orange County recreational park on Thursday. The victim is a man, but his identity has not been released by Orange County Fire Authority. Firefighters responded to a call for medical help at an area near the Haster Basin Recreational Park in Garden Grove around 8:40 […]
GARDEN GROVE, CA・3 DAYS AGO
KTLA

Three people who died in a shooting outside of a short-term rental home in Beverly Crest were identified on Sunday. The victims are Iyana Hutton, 33, from Chicago, Nenah Davis, 29, from Bolingbrook, Illinois, and Destiny Sims, 26, from Buckeye, Arizona, according to the Los Angeles County Coroner’s Office. The shooting occurred around 2:30 a.m. […]
BEVERLY HILLS, CA・19 HOURS AGO
KTLA

A Tesla driver accused of attacking motorists with a pipe in at least two road-rage incidents in Los Angeles has been arrested, authorities said Monday. Nathaniel Radimak, 36, was taken into custody Sunday evening by the California Highway Patrol. He was being held on $5 million bail. Police say Radimak is responsible for at least […]
LOS ANGELES, CA・4 HOURS AGO
KTLA

Authorities pursued a high-speed vehicle in Orange County on Thursday afternoon. The suspect was originally wanted for speeding, according to California Highway Patrol. The pursuit began in Seal Beach around 4:30 p.m. as the driver blew past red lights and intersections while driving recklessly on surface streets amid rush hour traffic. He reached speeds of […]
ORANGE COUNTY, CA・3 DAYS AGO
KTLA

Jay Leno is recovering from broken bones sustained during a motorcycle accident just two months after he was injured in a fire at his Los Angeles garage.
LOS ANGELES, CA・3 DAYS AGO
KTLA

An intruder reportedly broke into Drake’s mansion near Beverly Hills on Thursday night. Police sources tell TMZ that officers responded to the hip-hop star’s home after his security team spotted an unknown man leaving the house and appeared to be “carrying something in the process.” The site reports that the suspect disappeared when officers arrived, […]
LOS ANGELES, CA・3 DAYS AGO
KTLA

Britney Spears is speaking out after deputies with the Ventura County, California sheriff’s department showed up at her home this week to conduct a wellness check. Fans called authorities due to concerns about the pop star deleting her Instagram account. “I love and adore my fans but this time things went a little too far,” […]
VENTURA COUNTY, CA・3 DAYS AGO