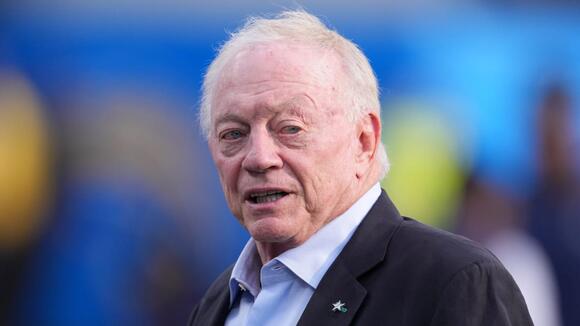 Jones can be seen in a photo showing a group of white students blocking the entryway for newly admitted Black students at the dawn of integration in public schools.

Ahead of his team’s Thanksgiving matchup with the Giants, Cowboys owner Jerry Jones was in the news Wednesday after a photo surfaced from his past showing his connection to one of the first instances of public school integration in his home state of Arkansas.

The photo—taken on Sept. 9, 1957, at North Little Rock High when Jones was 14 years old—shows a group of white students blocking the doorway and shouting slurs at six Black students as they tried to enter.

Jones said he went there as a “curious thing,” with no intention of harassing the Black students. He also said that he didn’t realize at the time how significant a moment it was.

“I don’t know that I or anybody anticipated or had a background of knowing … what was involved,” Jones said, per Dave Maraniss and Sally Jenkins of The Washington Post . “It was more a curious thing.”

When pressed about his role in attending the event, and how he behaved in the moment, Jones emphasized his primary motivation was curiosity and that he was not so concerned with the historical importance of the moment but rather getting in trouble with his high school football coach.

Later in the interview with Maraniss and Jenkins, which focused on Jones and the Cowboys’ hiring practices with regard to Black coaching candidates, Jones reflected on that time in his life and expressed regret at not trying to do more to help Black students feel more included.

it is what is. You woke people be fishing for anything. 🤷🏾‍♂️. But y'all voted for a guy 2 years ago that said he didn't want his grandchildren going to school with Black people, how it would be a zoo.

🇺🇲 Let me get this straight we are supposed to erase the past sins in America as if it didn't happen. How can America move forward without acknowledging it's past sins. So children of future generations are just not know True America History.Stop being so self righteous.🇺🇲🤔🤫

This story is exactly why racism is still a problem today!!!! I could see a problem if this had happened 65 days ago....but 65 years??? if anybody is taking bets, I bet 75% or more of the people making comments on here wasn't even alive in 1957. Grow up, get over yourselves and move on!

With tears in his eyes, the Cincinnati defensive end addressed what he was thinking on the play.
CINCINNATI, OH・2 DAYS AGO
Sports Illustrated

It wasn’t the ruling (which was correct) or the rule (which makes sense) that bothers us. No, what bothered us was the punishment the Bengals received late in Sunday’s game.
CINCINNATI, OH・2 DAYS AGO
Sports Illustrated

Danny Woodhead was among those who weren’t pleased with the calls in Sunday’s title game.
KANSAS CITY, MO・2 DAYS AGO
Sports Illustrated

The greatest quarterback of all time always knew how to make the correct decision on the field. So it's no surprise that he ended his career at precisely the right moment.
MICHIGAN STATE・18 HOURS AGO
Sports Illustrated

Now that he’s retired, Fox has a dilemma regarding its No. 1 NFL booth.
18 HOURS AGO
Sports Illustrated

Cameras caught the linebacker screaming in frustration while walking to the locker room after the AFC championship game.
CINCINNATI, OH・2 DAYS AGO
Sports Illustrated

The Dallas owner shared his opinion on the top signal-caller in Mobile this week.
DALLAS, TX・7 HOURS AGO
Sports Illustrated

They seem to be sick of people talking about it already.
16 HOURS AGO
Sports Illustrated

The Raiders quarterback will get the chance to have his Las Vegas swan song this upcoming weekend.
LAS VEGAS, NV・1 DAY AGO
Sports Illustrated

The final pick of the 2022 draft led San Francisco to within a win of the Super Bowl.
SAN FRANCISCO, CA・2 DAYS AGO
Sports Illustrated

The wide receiver appears to be making improvements in his recovery from a torn ACL.
1 DAY AGO
Sports Illustrated

Our look back at the quarterback’s historic career, including reaction and analysis from his retirement announcement.
MICHIGAN STATE・17 HOURS AGO