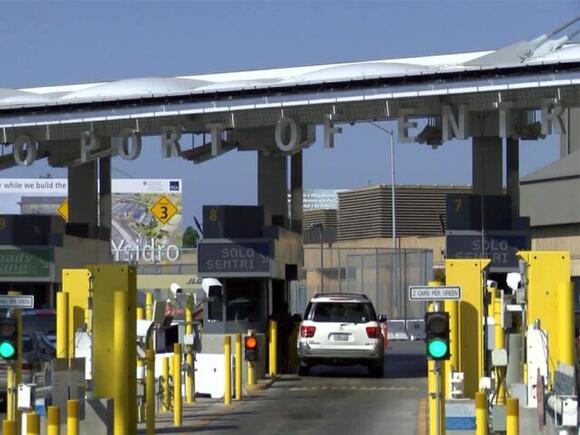 This week's statistics accounted for drugs seized through Sept. 30 at the San Ysidro, Otay Mesa, Tecate, Calexico, Andrade, and the San Diego air and seaports of entry.

Despite the 38% reduction in overall drugs seized, CBP officials said more than 50 tons of illegal drugs were discovered at the ports of entry, including more than 6,700 pounds of fentanyl and over 86,000 pounds of methamphetamine.

Though there was a decrease for most substances seized at the border, the 6,704 pounds of fentanyl represents a 5% increase over the previous year.

CBP said its California border port seizures account for more than half of the fentanyl and methamphetamine seized at ports of entry nationwide, and about half of all heroin seizures.

Jennifer De La O, CBP Director of Field Operations in San Diego, said in a statement, "It is evident from these statistics that CBP officers are the front-line of stopping these dangerous narcotics from entering the U.S."

During the 2022 fiscal year, more than 29 million passenger vehicles were inspected by border officers in San Diego and Imperial counties, along with more than 1.5 million trucks, nearly 19,000 buses, and around 16 million people entering the United States on foot.

The San Diego Sheriff's Department says overdose is the leading cause of accidental death in the county. The department has "Harm Reduction Kits" available at all stations and substations.
SAN DIEGO, CA・9 HOURS AGO
ABC 10 News KGTV

A suspected vehicle thief was arrested after San Diego Police said he parked the car and fell asleep at -- of all places -- the SDPD Traffic Division parking lot.
SAN DIEGO, CA・20 HOURS AGO
ABC 10 News KGTV

A San Diego man who sold a fentanyl-laced pill to a 15-year-old Coronado High School sophomore, leading to the teen's death, was sentenced Tuesday to 13 years in prison.
SAN DIEGO, CA・2 DAYS AGO
ABC 10 News KGTV

The series of recent shootings in California has communities on high alert. So much so, that La Mesa Police responded to what ended up being a false alarm at Lemon Avenue Elementary School Tuesday.
LA MESA, CA・1 DAY AGO
ABC 10 News KGTV

County supervisors Wednesday unanimously approved upgrades to a popular hiking spot near the community of Ramona and the city of Poway.
SAN DIEGO, CA・1 DAY AGO
ABC 10 News KGTV

A man who pleaded guilty to orchestrating an armed robbery at a National City jewelry store was sentenced Monday to eight years in federal prison.
NATIONAL CITY, CA・2 DAYS AGO
ABC 10 News KGTV

You might notice more lights on the corner of Newport and Cable in Ocean Beach. It's a security measure that was funded by donors hoping to make the coastal community a safer place.
SAN DIEGO, CA・10 HOURS AGO
ABC 10 News KGTV

A man who drove while intoxicated and crashed a car in La Jolla, killing his two passengers, was convicted Thursday of vehicular manslaughter.
SAN DIEGO, CA・9 HOURS AGO
ABC 10 News KGTV

Authorities have identified two San Diego Police officers who fatally shot a motorist who allegedly pulled a gun and got into a shootout with them last week following a brief pursuit in Barrio Logan.
SAN DIEGO, CA・1 DAY AGO
ABC 10 News KGTV

A North County family is reeling after the murder convictions and the death sentence were overturned for a man found guilty of killing three during a crime spree nearly four decades ago.
VISTA, CA・1 DAY AGO