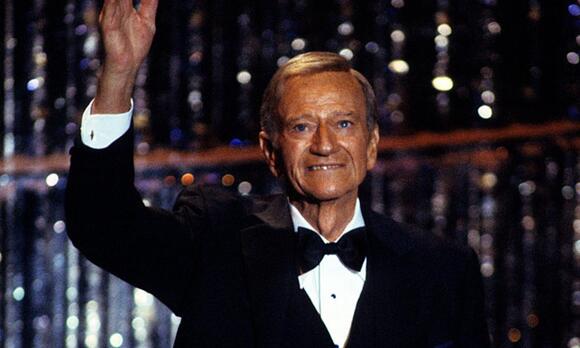 The John Wayne estate offered up a really touching photo of John Wayne along with his first child, Michael Wayne. The Duke’s eldest son was a film producer and actor during his life. He was the oldest son of Wayne and his first wife, Josephine Saenz. Sadly, Michael died back in 2003 at 68 years old.

One fan wrote in the comments, “Uncle Mike” to our family. Love and miss him. He was a true blue friend!” The reason that the Estate shared the picture on Wednesday was that it’s Michael’s birthday. Of course, the legend that is John Wayne is bigger than life itself. Seeing him with his son is worth noting because Wayne did love his family a lot. While Michael was an actor, he played a bigger role in his father’s films as a producer and executive producer. Among the films he worked on included The Alamo, The Green Berets, Chisum, and Brannigan . Another fan wrote, “Happy Heavenly Birthday to Michael Wayne!”

There are many legendary stories about Wayne and his movie career. Sometimes, actors turn down roles in films for different reasons. When it came to High Noon , he turned down one there. Movie buffs and fans know that Gary Cooper played the main role in the movie. Still, the fact that Wayne could have been in there is quite interesting. Why did the Duke say no? He called the movie “un-American.” John Wayne offered up quite a blazing critique of the movie to journalist Michael Parkinson. At the end of his sort-of soliloquy about the movie, Wayne said, “I don’t think that ever happens in the United States. Then at the end of the picture, he took the United States Marshal badge, threw it down, stepped on it and walked off. I think those things are just a little bit un-American.”

When it comes to True Grit , a lot of Wayne fans love the movie. The star won an Oscar for his performance as old crusty Rooster Cogburn. Yet he seemed to have a problem with one of his costars in the movie. You probably have heard of this guy named Robert Duvall before. Well, Wayne could not stand his “violent” costar . Duvall played Ned Pepper in the movie but he was a bit of a hothead back in that time. So there was a conflict between Duvall, Wayne, and True Grit director Henry Hathaway. At one point, Wayne threatened to punch out Duvall if he didn’t stop instigating issues with the director.

A new NASCAR season and there might be the same old problems. Denny Hamlin talked about feeling sick after the Clash. On his plane ride back, the Joe Gibbs Racing driver did not feel too well and had a rough night. While talking on the first episode of his new...
3 HOURS AGO
Outsider.com

After reports surfaced that Kyle Busch had been detained while trying to get into Mexico in late January, the NASCAR driver has released a statement. Busch was going on vacation with his wife Samantha. While going through customs, his handgun was found in his baggage, which he had accidentally left in the bag before leaving home.
NORTH CAROLINA STATE・3 HOURS AGO
Outsider.com

Stephen A. Smith has made it known that he’d love to be the successor to Jimmy Kimmel. Still, that doesn’t mean he wasn’t nervous as he’s ever been when he filled in for the latter two years ago. Smith has been promoting his new book over...
8 HOURS AGO
Outsider.com

Never one to hold back on sharing his thoughts, Tim Allen gave his take on the Chinese spy balloon and social media has some thoughts. Try Paramount+ FREE for a week. Subscribe here to watch your favorite shows. Featuring a Chinese lantern in the tweet, Tim Allen wrote, “A close...
MONTANA STATE・2 DAYS AGO
INSIDE News

Priscilla Presley, Elvis Presley's widow said her daughter Lisa's will that withdraws her as a beneficiary is completely invalid, according to court documents. The daughter and only heiress of Elvis Presley, who died on January 12, had named Barry Siegel (ex-manager) and her mother Priscilla as co-administrators of her estate in life and death, but apparently, Lisa had changed her will.
2 DAYS AGO
DoYouRemember?

The 2023 Grammys kicked off on Sunday, February 5, starring musical artists celebrating musical artists. Several very recognizable names saw their work honored, including Ozzy Osbourne, who took whom two awards that night. But viewers found themselves distracted by Madonna‘s face when the “Like a Prayer” singer took the stage for a special introduction.
LOS ANGELES, CA・10 HOURS AGO
Outsider.com

Former Pittsburgh Steelers quarterback Terry Bradshaw recently sat down in the hot seat. However, Bradshaw recently appeared on Who’s Talking to Chris Wallace, and Wallace asked him a tough question, if it ever gets under his skin that people may view him as dumb. “Yes. Oh, absolutely. Yeah, absolutely....
PITTSBURGH, PA・1 DAY AGO
Outsider.com

Former NFL tight end Kellen Winslow III, who is in prison for sex crimes, is seeking a reduction in his sentence, citing a new criminal reform law in California. The 39-year-old Winslow is representing himself and the petition he submitted was handwritten. But it spells out why he thinks this new criminal justice reform bill applies to his situation. He said he suffered physical trauma, possibly due due to CTE or a mild traumatic brain disorder. Winslow said that trauma played a part in the commission of his crimes. And because of that, “the court is required to impose the lower term (for sentencing considerations).”
CALIFORNIA STATE・2 DAYS AGO
Outsider.com

A recent study analyzing surf fatalities, shark attacks, and hurricanes revealed the deadliest beaches in the United States. And to the surprise of absolutely no one, a whopping seven of them are in Florida. Who doesn’t love a beach vacation? The hot sun, the cool, rolling waves, the soft sand...
FLORIDA STATE・1 DAY AGO
Outsider.com

Tonight is all about ringing in the NASCAR season and having a great time in Los Angeles. The stars are out and that includes Gwen Stefani. As the pop star and wife of country singer Blake Shelton got up in the FOX booth, she spilled the beans on Clint Bowyer.
LOS ANGELES, CA・1 DAY AGO
Outsider.com

Well, Rupp Arena has lost one Blue Coat. The ushers are a staple at Kentucky basketball games, but one man just lost his gig. After the ESPN cameras caught Doug giving a rowdy group of Florida Gators fans the bird, the University of Kentucky stepped in. For those that aren’t...
LEXINGTON, KY・7 HOURS AGO
Outsider.com

Good ole’ Florida, the state where go head-to-head with alligators, and people wrangle snakes on a daily basis. In this bizarre albeit unsurprising incident, a Florida man allegedly bit off the head of a pet ball python during a domestic dispute. According to reports via NBC Miami, police responded...
FLORIDA STATE・2 DAYS AGO
Outsider.com

Nobody will ever “send it” quite like Ross Chastain ever again. NASCAR recently banned the driver’s epic “Hail Melon” move at Martinsville, much to the dismay of race fans. Chastain, though, is taking it in stride. Chastain rode the wall and, quite literally, put the...
2 DAYS AGO
Outsider.com

A white dog abandoned in the Nevada desert has been rescued after living among a pack of wild coyotes for close to a year. It all started when Nevada residents spotted a pack of coyotes on the outskirts of the neighboring deserts. The majority of the canines were unmistakably coyotes. Among their ranks, however, was a large white dog, the cheerful-looking pup apparently leading the pack.
NEVADA STATE・1 DAY AGO
Outsider.com

NCIS: Los Angeles star Eric Christian Olsen took to Instagram and shared a photo telling the show’s fans goodbye. As you might know, the show has been canceled and will end after 14 seasons. Olsen plays Marty Deeks on the CBS crime drama. Try Paramount+ FREE for a week....
2 DAYS AGO
Outsider.com

Former Pittsburgh Steelers linebacker wondered why his phone was blowing up this weekend. Then he heard about the video ex-teammate and NFL wide receiver Antonio Brown posted. Brown took to social media recently to share that he believed James Harrison gave him CTE while the two were teammates in Pittsburgh. That’s a pretty dangerous allegation to make on Brown’s part.
PITTSBURGH, PA・1 DAY AGO