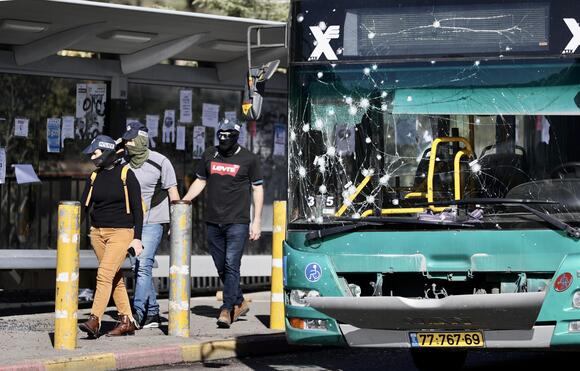 Israel's prime minister says the teen was a Yeshiva student who held Canadian and Israeli citizenship.

Two Americans were among 18 people injured, including the daughter of a New Jersey rabbi, according to Gov. Phil Murphy.

Murphy tweeted, "I am disgusted by the bombings in Jerusalem that took the life of a teenager and wounded at least 18 others, including the daughter of New Jersey native Rabbi Uri Pilichowski. I pray for the victims and stand firmly with our friends in Israel against terrorism."

The first explosion happened at a bus station near the entrance to Jerusalem.

The second was set off half an hour later at the city's Ramot Junction.

Investigators are calling this a combined terrorist attack and believe the devices were activated remotely by a "well-organized cell." No group has claimed responsibility, however.

The Chichijima Incident, also known as the "Murasaki" incident, was a real historical event that occurred during World War II in which American airmen were captured by the Japanese and killed.
2 DAYS AGO
CBS New York

Adult arrested after pretending to be student at N.J. school

NEW BRUNSWICK, N.J. -- A 29-year-old woman was arrested for pretending to be a high school student in New Jersey.New Brunswick police say she provided the school district a fake birth certificate in order to enroll.Students at New Brunswick High School are upset after learning at a school board meeting Tuesday night that a 29-year-old woman was arrested for using a fake birth certificate to enroll and attending school for four days.Police have charged that woman, Hyejeong Shin, with one count of providing a false government document with the intent to verify one's identity or age. The school circulated a letter...
NEW BRUNSWICK, NJ・1 DAY AGO
CBS New York

NEW YORK -- Joseph Franco, a former NYPD detective, is on trial, accused of lying about witnessing drug deals to secure convictions.Prosecutors say the undercover narcotics detective exhibited a pattern of lying about what he saw to secure arrests, sending innocent people to jail and jeopardizing hundreds of cases.Franco, 50, sat in court Tuesday charged with six counts of perjury, five counts of official misconduct, and 15 counts of providing false documents to a public official.He is accused of falsely claiming he saw drug deals go down in three cases between 2017 and 2018.READ MORE: Opening statements begin in perjury trial...
NEW YORK CITY, NY・2 DAYS AGO
CBS New York

NEW YORK -- Mayor Eric Adams insists New York City has handled the asylum seeker crisis better than any other city in the nation, but his latest plan house migrants at the Brooklyn Cruise Terminal is facing some backlash. Faced with an unending stream of asylum seekers and no help from the state or federal governments, the mayor likened it to the emergency steps taken by the city to deal with the pandemic, hurricanes and floods. "We utilized ships during COVID-19. People forgot that. We used ships to house people. We opened tents in Central Park during COVID-19. We had trailers in...
NEW YORK CITY, NY・3 DAYS AGO
CBS New York

NEWARK, N.J. -- A Jersey City councilwoman on Tuesday made her only court appearance in connection to a hit-and-run accident.The case was moved to a different county to avoid any conflicts of interest.Councilwoman Amy DeGise was in a Newark courtroom pleading guilty to leaving the scene of an accident last summer. She was caught on camera in her black Nissan Rogue hitting a bicyclist who had run a red light in Jersey City.The councilwoman didn't slow down and kept on going.When asked if she knew she had in fact struck a bicycle, DeGise said "Yes," and then responded, "No," when...
JERSEY CITY, NJ・2 DAYS AGO
CBS New York

JERSEY CITY, N.J. -- A woman was shot and killed on Tuesday morning inside an apartment building, police said.A suspect was later taken into custody, the Hudson County Prosecutor's Office said.The shooting happened at The Toy Factory Apartments on Bergen Avenue in Jersey City.The victim was rushed to Jersey City Medical Center, where she was pronounced dead.A neighbor said she heard the gunfire."I really, really heard the shots. It went bang, bang, bang," the neighbor said. "It was quiet and I was going to open my door. Something told me not to open the door. As I passed him coming in the building, going up the elevator and he was coming the opposite way, who knows? He could have shot me."The victim's name was not immediately released.CBS2 will have more on this story on the News at 5 p.m.
JERSEY CITY, NJ・2 DAYS AGO
Los Angeles Times

An Islamic extremist who killed eight with a speeding truck on a popular New York City bike path has been convicted and could face the death penalty.
NEW YORK CITY, NY・36 MINUTES AGO
CBS New York

NEW YORK -- Pope Francis says laws around the world criminalizing homosexuality are "unjust," and he wants Catholic bishops in nations that have such laws to work towards overturning them.The pope made his comments in a wide-ranging interview with Nicole Winfield of The Associated Press, who asked about the Church view of the more than 50 nations, mostly in Africa and the Middle East, that outlaw same-sex relations.Even where they're not enforced, the laws inspire harassment of LGBTQ people.READ MORE: Pope Francis: Homosexuality "is not a crime," but gay sex is "a sin"Francis spoke in his native Spanish, saying "Being homosexual...
1 DAY AGO
CBS New York

New Holocaust installation "The Book of Names" open at the UN

NEW YORK -- Friday is International Holocaust Remembrance Day.A new installation at the United Nations on the East Side is moving visitors to tears.CBS2 met a Holocaust survivor there who recently shared her story with President Joe Biden.Rutka Rakhel was the younger sister of Bronia Brandman. She was murdered in the Auschwitz concentration camp and is one of nearly 5 million Holocaust victims documented in "The Book of Names."The book is 26 feet wide, and 7 feet tall, and it has been installed by Yad Vashem -- the World Holocaust Remembrance Center -- in the U.N. visitors lobby. It is...
NEW YORK CITY, NY・1 HOUR AGO
CBS New York

RIDGEFIELD, N.J. -- The mass shooting in Monterey Park, California is raising anxiety in Asian American communities across the county, including in New Jersey. Many in Bergen County said they live in fear as they're celebrating the Lunar New Year. The H Mart in Ridgefield is where many were wrapping up last-minute food shopping Saturday, right before news of the shooting broke. "The fact it could happen anywhere and can happen to anyone is something that really terrifies me," said Kevin Tang. Tang, whose mother is a first-generation immigrant from China, said no matter the motive, the tragedy has intensified fears in the Asian...
MONTEREY PARK, CA・3 DAYS AGO
CBS New York

NEW YORK - There's been a big meth bust spanning locations in New York City and New Jersey. Chopper 2 spotted boxes being carried out of buildings in Washington Heights. That's one site where, sources say, the Department of Homeland Security and NYPD executed 10 search warrants, starting at 6 a.m. Wednesday. In all, they arrested more than 12 people. Authorities also searched locations in Harlem, the Bronx, and in New Milford, N.J.The U.S. Attorney-Southern District will be handling the case.
NEW YORK CITY, NY・1 DAY AGO