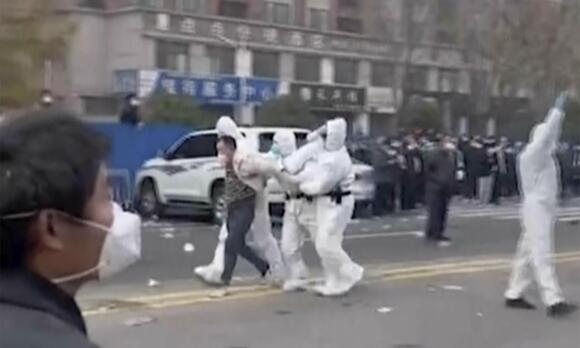 Police in China have dealt out beatings to workers protesting over working conditions and pay at the biggest factory for iPhones, as the country’s Covid-19 cases hit a new daily high.

Videos online showed thousands of people in masks facing rows of police in white protective suits with plastic riot shields. Police kicked and hit a protester with clubs after he grabbed a metal pole that had been used to strike him. People who made the footage said it was filmed at the site.

The protest in Zhengzhou lasted through Wednesday morning as thousands of workers gathered outside dormitories and confronted factory security workers, according to Li.

Foxconn, the biggest contract assembler of smartphones and other electronics, is struggling to fill orders for the iPhone 14 after thousands of employees walked away from the factory in the central city of Zhengzhou last month after complaints about unsafe working conditions.

Protests started on Tuesday after employees who had travelled long distances to take jobs at the factory complained that the company changed the terms of their pay, according to an employee, Li Sanshan.

Li said he quit a catering job when he saw an advertisement promising 25,000 yuan ($3,500) for two months of work. That would be significantly above the average pay for this type of work in the area.

After employees arrived, the company said they had to work two additional months at lower pay to receive the 25,000 yuan, according to Li.

“Foxconn released very tempting recruiting offers, and workers from all parts of the country came, only to find they were being made fools of,” he said.

Foxconn said on Thursday that a “technical error” was responsible for the confusion over pay and offered an apology.

A man who identified himself as the Communist party secretary in charge of community services was shown in a video posted on the Sina Weibo social media platform urging protesters to withdraw. He assured them their demands would be met.

The protests come amid severe frustration over Covid restrictions in areas across China that have closed shops and offices and confined millions of people to their homes.

While the numbers of cases and deaths are relatively low compared to the other countries, China’s Communist party remains committed to its “zero-Covid” strategy that aims to isolate every case and eliminate the virus entirely.

On Wednesday, the government ordered an effective lockdown of several districts of Zhengzhou, with residents of the city centre not allowed to leave unless they have a negative Covid test and permission from authorities.

The restrictions, which will last five days from midnight Friday, affect more than six million people – about half the city’s population.

The government is trying to contain the latest wave of outbreaks without shutting down factories and the rest of its economy as it did in early 2020. Its tactics include “closed-loop management” under which workers live in their factories with no outside contact.

China’s status as an export powerhouse is based on factories such as Foxconn’s that assemble the world’s consumer electronics, toys and other goods.

Apple warned iPhone 14 deliveries would be delayed after access to an industrial zone around the Zhengzhou factory – which Foxconn says employs 200,000 people – was suspended after outbreaks.

The company did not immediately respond to a request for comment on the latest protests.

Reuters and Associated Press contributed to this report

Nichols, 29, died three days after a traffic stop in Memphis turned violent. Plus, the rise of queerbaiting accusations
MEMPHIS, TN・12 HOURS AGO
The Guardian

If the German chancellor, Olaf Scholz, chose to upgrade Germany’s military assistance to Ukraine this week, it was only as a result of the extreme amount of pressure that had been building up in recent days. Russia’s full-scale invasion of Ukraine has thrust upon Germany the necessity of some...
GEORGIA STATE・1 DAY AGO
The Guardian

Producers blame avian flu for the soaring costs, but one farmers’ group is airing accusations of price-gouging
MARYLAND STATE・1 DAY AGO
The Guardian

Claims that the boss of the Wagner Group, a key part of Russia’s military machine, was aided in a libel action must be run to ground, says shadow chief secretary to the Treasury Pat McFadden
2 DAYS AGO
The Guardian

The one change that didn’t work: I deleted all my social media apps – and found myself bored

A year into the pandemic, in early 2021, I was spending most of my time online. I sat and I scrolled – on Facebook, Twitter and Instagram – letting the latest horrifying news wash over me, or watching videos of cute animals, or messaging bored friends about our mutual states of crisis.
1 DAY AGO