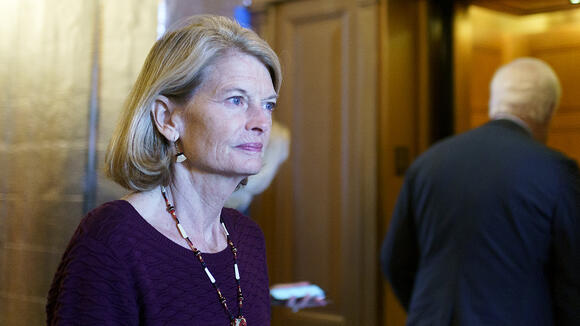 The Associated Press called the race just after 8 p.m.

Murkowski won with the state’s new ranked choice voting system after neither she nor Tshibaka secured more than half of first-choice votes, according to the AP. In the second round, the incumbent took the win with 53.7 percent of the vote, to Tshibaka’s 46.3 percent.

Murkowski, who has served in the upper chamber since 2002, drew the ire of former President Trump after voting to convict him in his second impeachment trial.

Trump subsequently backed Tschibaka in a high-profile effort to oust the incumbent , whom he has called “worse than a Democrat.”

Murkowski underscored her bipartisan record throughout her campaign — and bucked her own party last month when she announced she’d rank Democrat Rep. Mary Peltola first on her ballot in the state’s House race.

Peltola was also projected to win her race Wednesday, fending off former Alaska Gov. Sarah Palin (R) and two others to hold onto the seat she won during a special election this summer following the death of Rep. Don Young (R-Alaska).

The results of the Alaska race took weeks to announce due to the state’s newly introduced ranked choice voting system, in which voters rank their candidates by preference.

Under the new system, a candidate wins outright in the first round of voting if he or she gets over 50 percent of the vote. If no candidate meets that threshold, a second round takes place, in which the candidate that received the fewest votes is eliminated, and the votes of those who voted for the eliminated candidate are redistributed to voters’ next choice for the seat.

The process continues until one candidate breaks 50 percent of the vote.

The new system allowed both Murkowski and Tshibaka to be on the midterm ballot, even though they’re both Republican contenders.

The other candidate in the ring was Democrat Pat Chesbro. A fourth candidate, Republican Buzz Kelley, was on the ballot despite having suspended his campaign to endorse Tshibaka.

With Chesbro pulling in low poll numbers ahead of Election Day, the ranked-choice system was expected to be a boost for Murkowski, as votes for the Democrat were likely to shift to the more moderate Republican in a second round, rather than to the more conservative Tshibaka.

The Clemson University Fire and EMS said that they received a call about a cardiac arrest regarding a medical emergency on Sunday night.
GREENVILLE COUNTY, SC・9 HOURS AGO
WSPA 7News

A newborn baby was found dead next to railroad tracks in East Rockingham Thursday afternoon, according to the Richmond County Sheriff’s Office.
RICHMOND COUNTY, NC・2 DAYS AGO
WSPA 7News

One person is dead after a head-on crash on U.S. 221 in northern Cherokee County.
CHEROKEE COUNTY, SC・3 DAYS AGO
WSPA 7News

GREENWOOD, S.C. (WSPA) – A daycare worker was charged after police said she did nothing to stop assaults between 4-year-olds. The Greenwood Police Department said the SC Department of Social Services notified them Monday about an incident that occurred on the morning of January 20th at the Gleamns daycare on Bypass 25. “I believe they […]
GREENWOOD, SC・2 DAYS AGO
WSPA 7News

ANDERSON COUNTY, S.C. (WSPA) – The Anderson County Sheriff’s office said that they arrested a man after serving a warrant at a home in early January. According to deputies, the Directed Patrol Unit, SWAT, and Narcotics Division did a search warrant along Spake Road in Pendleton. Deputies said that Justin Cobb tried to run out […]
ANDERSON COUNTY, SC・14 HOURS AGO
WSPA 7News

One of the twin infants rescued during a statewide Amber Alert search in Ohio last month has died, police said.
COLUMBUS, OH・20 HOURS AGO
WSPA 7News

An inmate at the Laurens County Detention Center is accused of trying to strangle a detention officer.
LAURENS COUNTY, SC・2 DAYS AGO
WSPA 7News

One person is dead and another is in the hospital after a crash Friday evening in Greenville County.
GREENVILLE COUNTY, SC・2 DAYS AGO
WSPA 7News

Just three weeks after the South Carolina Supreme Court ruled the six-week abortion ban unconstitutional, a new bill is being considered at the state house.
2 DAYS AGO
WSPA 7News

Suspect charged after man shot in neck in Spindale

Police have charged a man in connection with a shootout during a fight Sunday in Spindale which sent one man to the hospital.
SPINDALE, NC・3 DAYS AGO
WSPA 7News

Pedestrian hit, killed on I-85 in Spartanburg Co.

A person was hit and killed on I-85 Saturday morning in Spartanburg County.
SPARTANBURG COUNTY, SC・1 DAY AGO
WSPA 7News

HIGH POINT, N.C. (WGHP) — Victims are sharing their experiences after scammers changed their lives with a single swipe. There have been over 800 reports filed in the Piedmont Triad of card skimmers stealing funds off of people’s EBT cards. Most of the cases are in Guilford, Randolph and Yadkin Counties. Nearly a dozen were […]
HIGH POINT, NC・2 DAYS AGO
WSPA 7News

SPARTANBURG COUNTY, S.C. (WSPA) – Crews responded to a house fire Thursday afternoon in Spartanburg County. The North Spartanburg Fire Department said crews responded to the fire around 3:19 p.m. Upon arrival, first responders saw the fire going through the roof. Crews worked hard battling the wind-driven attic fire. The cause of the fire is […]
SPARTANBURG COUNTY, SC・15 HOURS AGO
WSPA 7News

Pence: ‘Mistakes were made’ in classified records handling