Jan. 6 staff angry with Cheney for overfixation on Trump: Report 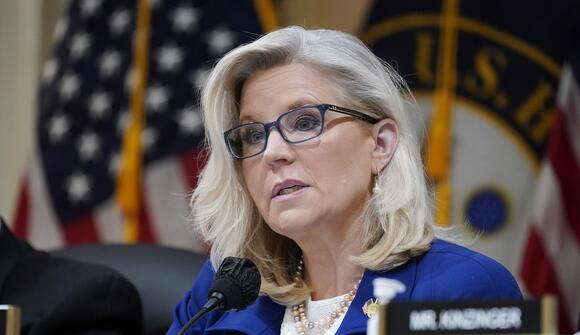 Staffers speaking with the Washington Post voiced their frustrations over Cheney's handling of the committee, saying she has turned the commission into a political vehicle to launch a political comeback. In her position as vice chairwoman, the Wyoming congresswoman has exerted considerable control over the investigation, steering it away from the original goal of investigating security failures on Jan. 6 to an attack on former President Donald Trump. Her policy of removing investigations not immediately relating to Trump has sparked frustration from many working on the committee.

“We all came from prestigious jobs, dropping what we were doing because we were told this would be an important fact-finding investigation that would inform the public,” one former committee staffer told the outlet. “But when [the committee] became a Cheney 2024 campaign, many of us became discouraged.”

“Donald Trump is the first president in American history to attempt to overturn an election and prevent the peaceful transfer of power. So, damn right Liz is ‘prioritizing’ understanding what he did and how he did it and ensuring it never happens again,” he said.

He went on to discredit the work of entire teams of the investigation not related to Trump, calling them "subpar."

Tim Mulvey, the committee's spokesman, sent a similar statement, calling all internal dissenters cowards and accusing them of disloyalty.

“They’ve forgotten their duties as public servants and their cowardice is helping Donald Trump and others responsible for the violence of January 6th. All nine committee members continue to review materials and make contributions to the draft report, which will address every key aspect of the committee’s investigation. Decisions about the contents of the report ultimately rest with the committee’s bipartisan membership, not the staff,” he said.

Some staffers expressed anger toward some of Cheney's behavior, such as her bullishness over former White House aide Cassidy Hutchinson's testimony, which she kept secret from much of the staff. It was apparently Cheney's doing to put Hutchinson in the spotlight and leave her claims mostly unquestioned, including claims that Trump attempted to wrestle the steering wheel away from his Secret Service driver on Jan. 6, which the former president disputed. Cheney's handling of Hutchinson reportedly led to many "unforced errors," the staffers said.

The final report will most likely be released before the end of the year.

She belongs in the Democratic Party. She doesn't have an ounce of loyalty, integrity, honesty, or principles not to mention she has no qualms about lying. That is why the people of the Great STATE OF WYOMING kicked her to the curb.

Hateful woman. Nothing on her mind but HATE HATE HATE. Hate corrodes the heart and mind. Nothing good comes from it. Cheney is obsessed with hate. Needs psychiatric help.

Why not spend some time reading and researching The Cheney dynasty. Look for the money trails and the political motivation for building the war machine. Standing on the bodies of Dead soldiers to amass a fortune is amoral and hideous

Rep. Adam Schiff (D-CA) is facing an early obstacle to his 2024 Senate bid after a nonprofit ethics organization filed a complaint to the Office of Congressional Ethics accusing the California Democrat of using government resources to boost himself politically.
CALIFORNIA STATE・3 DAYS AGO
WashingtonExaminer

Arizona's Kari Lake, the self-described "Donald Trump with softer edges," may have been defeated in November, but she has been working hard ever since, leveraging her loss into a multimillion-dollar windfall.
ARIZONA STATE・3 DAYS AGO
Benzinga

Over a dozen letters exchanged between former U.S. President Donald Trump and North Korean leader Kim Jong Un have been published by the Korean-American Club. What Happened: Trump’s self-described 'love letters' from Kim were retrieved by the authorities from his Mar-a-Lago residence in Florida. In the letter, Kim reportedly expressed his willingness to discuss his isolated country’s denuclearization with Trump while sidelining then-South Korean President Moon Jae In, reported Star And Stripes.
FLORIDA STATE・2 DAYS AGO
Newsweek

The GOP lawmaker recently urged Democrats to join Republicans in a newly formed subcommittee tasked to investigate the "weaponization" of the federal agencies.
OHIO STATE・1 DAY AGO
Business Insider

This help line is a growing effort to give Ukraine vital advice on repairs and maintenance as it pushes weapons to their limits.
WASHINGTON STATE・9 HOURS AGO
abovethelaw.com

Trump Lawyer Alina Habba Brags About All The Courtroom Winning. No, She Will Not Be Taking Questions At This Time.

Fresh off being fined a million dollars and called out by a federal judge for abusive, bad faith litigation, Alina Habba is back on air to assure the MAGA faithful that he is winning BIGLY. The former president is doing so much winning he’s actually sick of it, Habba explained...
FLORIDA STATE・7 HOURS AGO
WashingtonExaminer

Federal prosecutors considered pressing charges against former President Donald Trump shortly after he left office for campaign finance violations but ultimately decided against it, according to a new book.
WASHINGTON STATE・3 DAYS AGO
WashingtonExaminer

A European Union general secretary noted Friday that Russia is advancing the war "into a different stage" across Ukraine as its more foreign artillery is sent towards the conflict.
WASHINGTON STATE・2 DAYS AGO
Business Insider

Russia’s defense industry has “almost doubled” its prewar ammunition production rates, according to a senior NATO member defense official who estimated that Ukrainian forces could face as many as 10,000 incoming rounds per day.
WASHINGTON STATE・2 DAYS AGO
WashingtonExaminer

Former President Donald Trump is not receiving endorsements or gaining traction for his 2024 presidential run among leaders in the crucial swing state of Iowa.
IOWA STATE・3 DAYS AGO
WashingtonExaminer

There are 10 days left before recipients of Social Security retirement money start receiving their monthly payment of up to $4,194 for the month of February.
1 DAY AGO
WashingtonExaminer

San Francisco police have released body camera footage of the moment Paul Pelosi was attacked in his home by an assailant with a hammer last October.
WASHINGTON, CA・3 DAYS AGO
WashingtonExaminer