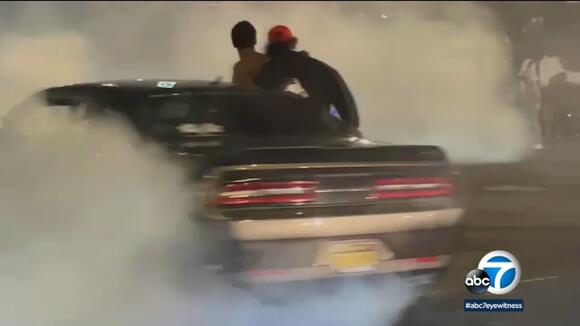 The LAPD is ramping up patrols to stop dangerous street takeovers and street racing over the Thanksgiving holiday week. Such activity was rampant on the Sixth Street Bridge when it opened in July. The LAPD says thanks to its Project Safe Streets task force, it's now quiet on the bridge. "We made a big impact. It's been pretty quiet up here on the Sixth Street Bridge. The city has also put in these dots in the middle of the road to ensure that street racers do not go over them," said LAPD Capt. Elaine Morales. The LAPD has a street racing task force that's been going after not only the participants but the organizers. The task force has made over 300 arrests including some for gun violations. For the Thanksgiving holiday, law enforcement officials and AAA say they're asking Southern California motorists not to turn this holiday into something tragic. "The bottom line is our research by AAA found that the faster a driver is going at the time of the crash, the less likely it is that they're going to be able to time get down to a survivable speed before the impact," said Doug Shupe, a spokesperson for AAA. Here's another incentive for drivers not to take risks like street racing or street takeovers. The police have the right to take your car. "Whenever we site cite someone or arrest someone for being at a takeover, we impound that vehicle for a maximum of 30 days," said LAPD Sgt. Arnold Castellanos. And the cost for getting your car out of the impound could be anywhere between $2,000 to $2,500. MORE | Spectator hit by driver during street takeover in Buena Park

Orange County saw several street takeovers overnight, including a violent incident that was caught on camera in Buena Park.

Law enforcement agencies in Southern California are preparing for protests after the release of video showing the fatal beating of Tyre Nichols at the hands of former Memphis police officers.
LOS ANGELES, CA・2 HOURS AGO
ABC7

A 31-year-old man with a history of alleged reckless driving has been arrested for a hit-and-run crash in South LA that killed two brothers, police said Thursday.
1 DAY AGO
ABC7

Sometimes, it takes a while to get the perfect selfie. Well, a bear in Colorado struck a pose and took about 400 "bear selfies" on a trail camera.
BOULDER, CO・3 HOURS AGO
ABC7

A radio-collared mountain lion known as P-81 was found dead on Pacific Coast Highway in the western Santa Monica Mountains after likely being struck by a vehicle.
SANTA MONICA, CA・6 HOURS AGO
ABC7

The San Fernando Valley can experience a little taste of Japan at Mitsuwa Marketplace in Northridge.
2 HOURS AGO
ABC7

A 35-year-old woman who went missing from a transitional housing facility in South Los Angeles earlier this month has been found safe, police said.
2 DAYS AGO
ABC7

California is currently the only state in the country that doesn't regulate who can and cannot call themselves an athletic trainer.
BURBANK, CA・7 HOURS AGO
ABC7

If you've been making plans to take a trip to a local museum, you may want to mark this day on your calendar.
20 HOURS AGO
ABC7

Brianna Bodley is battling Rasmussen's encephalitis, and the medicine she needs has caused her to rapidly gain weight, making her clothes unwearable.
SAN BERNARDINO, CA・3 DAYS AGO
ABC7

John Eastman, a lead architect of some of former President Donald Trump's efforts to remain in power after the 2020 election, was slapped with disciplinary charges that could lead to his disbarment.
CALIFORNIA STATE・13 HOURS AGO