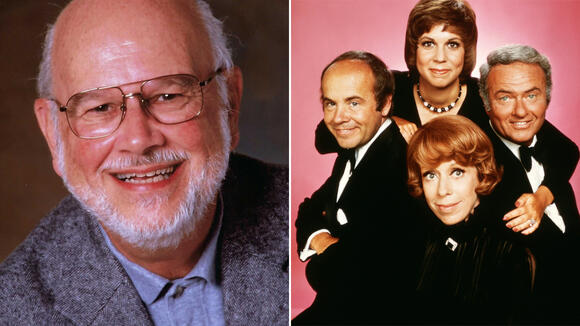 Gene Perret , who began a decades-long comedy writing career contributing jokes to stand-ups Slappy White and Phyllis Diller before joining the Emmy-winning writing staff of The Carol Burnett Show , launching a 28-year tenure with Bob Hope and serving as a producer on Three’s Company and Welcome Back, Kotter , died Nov. 15 of liver failure at his home in Westlake Village, CA. He was 85.

According to family , Perret began writing comedy as a hobby while working as an electrical engineer for General Electric in Philadelphia during the mid-1950s. After contributing some one-liners to local comic White, he was introduced by a friend to Diller, who hired him for her 1968 sitcom The Beautiful Phyllis Diller Show and encouraged Perret to pursue comedy writing full time. In 1969 he moved his family to California and within a year was writing for variety show The Jim Nabors Hour .

In 1971 and ’72, Perret wrote for Rowan & Martin’s Laugh-In before contributing to episodes of The New Bill Cosby Show, The Helen Reddy Show, Love, American Style, All in the Family and What’s Happening.

After Burnett , he wrote and produced multiple episodes for hit sitcoms Welcome Back, Kotter and Three’s Company , and in 1980 reunited with Burnett’s Tim Conway on the short-lived The Tim Conway Show .

Perret’s longest-lasting professional collaboration was with Hope, serving on the comedian’s writing staff for 28 years and working on dozens of Hope’s TV specials beginning with 1984’s Bob Hope’s USO Christmas in Beirut .

In addition to his television work, Perret wrote numerous magazine articles and more than 40 books, including Comedy Writing Step by Step and The Comedy Writing Workbook.

Perret is survived by his wife of 64 years, Joanne, four children, six grandchildren, seven great-grandchildren and several nieces and nephews.

A brilliant career from a brilliant man! I hope that you find peace, as well as some of the laughter that you helped bring to so many others.

Prayers for the family and friends, so sorry for your loss. What a wonderful well spent 85 years of life with so many achievements. Now he has an eternity to tell God his jokes, as God does have a sense of humor, and I am sure he will get plenty of laughs. 🙏

Matthew McConaughy has been tapped to voice the iconic King of Rock ‘n’Roll, Elvis Presley, in Agent Elvis (fka Elvis King) an adult animated series about the King himself. McConaughey also will executive produce the series, which hails from Priscilla Presley and John Eddie, Sony Pictures Animation, Authentic Brands Group and Titmouse. McConaughy’s Elvis is a global superstar by day, ass-kicking vigilante by night who eventually joins the secret agency “TCB” as Agent Elvis.  Co-created by Priscilla Presley and John Eddie, in Agent Elvis, Elvis Presley trades in his jumpsuit for a jet pack when he is covertly inducted into...
TEXAS STATE・9 HOURS AGO
Deadline

Charles Kimbrough, best known for his portrayal of network anchorman Jim Dial on the CBS sitcom Murphy Brown, died Jan. 11 in Culver City, Calif. No cause was given by his son, who confirmed the death. Kimbrough received a Tony Award nomination in 1971 for best featured actor in a musical for playing Harry in the original production of Stephen Sondheim’s Company. He later appeared in the Sondheim musical Sunday in the Park With George. He later received a supporting comedy actor Emmy nomination in 1990 for his work on Murphy Brown. A Minnesota native, Kimbrough was also the voice of...
CULVER CITY, CA・1 DAY AGO
Deadline

Viola Davis has joined the coveted circle of those who have won an Emmy, Oscar, Tony and Grammy, picking up the “G” in the “EGOT” title today as part of the pre-telecast for the 65th annual Grammy Awards. Davis earned the Grammy for her audiobook memoir, Finding Me. “It has just been such a journey,” Davis said while accepting the award. “I just EGOT!” Only 18 people have achieved the status, and Davis is the fourth Black person alongside Whoopi Goldberg, John Legend, and Jennifer Hudson to win all four.  Davis already has an Oscar, two Tony’s and an Emmy. “I wrote this...
TEXAS STATE・1 DAY AGO
Deadline

The BBC has been forced to apologize after an image of Viola Davis from January’s Golden Globes was shown on its news channel with a headline identifying the Oscar winner as history-maker Beyoncé. BBC News’ rolling coverage of the Grammys included a few seconds period when the image of Davis was matched with the caption “Beyoncé’s Big Night,” before the segment moved on to the next image. BBC News has in the past hour apologized via a Twitter statement and said the error “fell below the BBC’s usual standards.” “We apologise for the mistake last night when our news channels briefly showed a...
TEXAS STATE・12 HOURS AGO
DoYouRemember?

The 2023 Grammys kicked off on Sunday, February 5, starring musical artists celebrating musical artists. Several very recognizable names saw their work honored, including Ozzy Osbourne, who took whom two awards that night. But viewers found themselves distracted by Madonna‘s face when the “Like a Prayer” singer took the stage for a special introduction.
LOS ANGELES, CA・10 HOURS AGO
Deadline

EXCLUSIVE: Yellowstone, TV’s top-rated drama, may end in spectacular fashion.  Deadline understands that Taylor Sheridan, co-creator and showrunner, Paramount Global and Paramount Network are moving to end their signature show in its current form. But they are plotting a potential franchise extension to continue the Dutton saga, a new show with Matthew McConaughey in talks to star.  It is unclear which of the Yellowstone cast will move over to the McConaughey-led series, but it is expected to include several of the big stars.   “We have no news to report. Kevin Costner is a big part of Yellowstone and we hope that’s the case for...
TEXAS STATE・5 HOURS AGO
Deadline

Kim Petras marked her win for Best Pop Duo/Group Performance with Sam Smith by reminding folks how she trailblazed her way to the Grammy stage. “Sam graciously wanted me to accept this award because I’m the first transgender woman to win this award,” she announced from stage to huge applause. Related Story Grammy Awards Winners List – Updating Live Related Story Trevor Noah Opens Grammys With A Dig At Los Angeles; Introduces The Rock To Big Fan Adele Related Story Viola Davis Now An 'EGOT' After Grammy Win Smith then encouraged folks to keep standing up for his partner on “Unholy.” This is Smith’s first Grammy win...
23 HOURS AGO
Deadline

Adele got emotional as she took the Grammy Awards stage following her win in the Best Pop Solo Performance category. The singer and songwriter was doubly surprised as it was her new bestie Dwayne “The Rock” Johnson who handed her the gramophone. “Get up here best friend, Adele,” the Black Adam star said announcing the winner. Related Story Grammy Awards Winners List – Updating Live Related Story The Grammys GOAT: Beyoncé Becomes All-Time Champion With 32nd Career Win Related Story CBS' Grammys Telecast Skips Closed Captions For Bad Bunny & Displays "Singing Non-English" Instead At the top of the show, host Trevor Noah revealed the Easy on Me singer...
TEXAS STATE・21 HOURS AGO
Deadline

Ashton Kutcher is now an entrepreneur, producer and actor but got his start as a model. The That 70s Show alum recalled his male modeling days posing for the Abercrombie & Fitch catalog and said Triangle of Sadness is an “accurate depiction” of what the industry is like. “If you actually want to see an extraordinarily accurate depiction of what it’s like to be a male model, watch the first 10 minutes of Triangle of Sadness,” he said during an interview with Esquire. Kutcher continued, “I remember living that scene. The depiction is so accurate, it’s terrifying.” Related Story Ruben Östlund On The Inspirations...
TEXAS STATE・2 DAYS AGO