People Who've Eaten At Celeb-Owned Restaurants Are Sharing Their Honest Experiences, And I'm Adding Allll Of These To My Bucket List 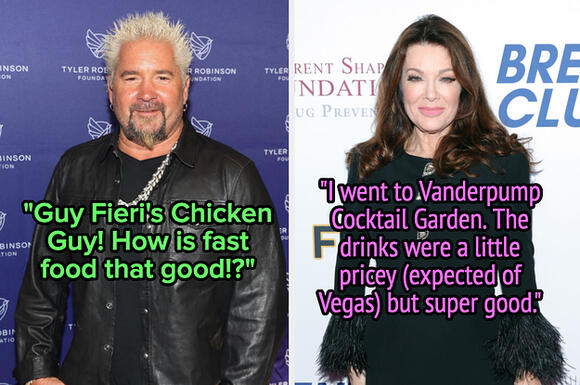 Recently, I rounded up reviews of celeb-owned restaurants from members of the BuzzFeed Community who've eaten at them. In the comments, even more of y'all shared your delicious dining experiences.

Here are 15 celeb-owned restaurants that fans say are worth checking out:

Note: Some entries have been edited for length and/or clarity.

1. "Ty Burrell has a few bars here in Salt Lake City, called Beer Bar and Bar-X, and they have the best fries I’ve ever had. Truly drool-worthy."

"Plus, they have incredible burgers and other foods. Highly recommend if you are ever in the area!"

2. "I had the beef Wellington at Gordon Ramsay Steak [which has multiple locations], and it was maybe the most amazing meal ever."

"I demolished the whole thing!"

3. "The burgers and truffle fries at Gordon Ramsay Burger in Planet Hollywood are dynamite!"

4. "I recently tried Ramsay’s Fish and Chips in DC. I was a little apprehensive, but it was actually one of the best chips of my life."

"The dirty chips with parmesan are the bomb, and the lemonade was really nice, too."

5. "In NYC, Food Network star Alex Guarnaschelli's restaurant Butter is PHENOMENAL! The best rolls! Alex was there when my family and I went, and she came over to our table and chatted with us for a while."

"They gave us an autographed picture of her, too."

6. "Guy Fieri's Chicken Guy [which has multiple locations]! How is fast food that good!?"

7. "I went to Vanderpump Cocktail Garden [owned by Lisa Vanderpump] this past year, and while I didn't have food, I had drinks. They were a little pricey (expected of Vegas) but super good."

"Also, my server was super sweet and gave me a stack of cocktail napkins with the logo on them as a souvenir when I told her I was a fan of the show [ Vanderpump Rules ]."

8. "SUR [which is partially owned by Lisa Vanderpump] in West Hollywood is great. Due to a weird and random series of events, I ended up on the employee patio and ran into Guillermo Zapata, Lisa's co-owner, and he is the nicest dude ever!"

"He told me to come back anytime and ask for him. When I told him I no longer live in LA, he insisted that even if I came back 10 years later, he'd happily hook us up. He 'never forgets a face' (it's more likely he just knows if someone asks for him, he's met them before. But that's still incredibly kind). Great service. Great staff. I had so much fun and have some hilarious photos from that night."

9. "Scott Conant's restaurant Mora Italian in Phoenix, Arizona, is my favorite restaurant of all time."

"It's one of the things I miss most since I moved away."

10. "Ted's Montana Grill, a chain of restaurants in the Atlanta area owned by CNN founder Ted Turner, is amazing! Their big thing is that they serve bison, and it’s incredible."

11. "Lago (by Julian Serrano) in Bellagio Las Vegas served me the best salmon I have ever eaten. The appetizer and desserts were also divine. Because it was my birthday and we made a reservation, we were able to get a window seat to watch the fountain show, too."

"Even though I’d been to Vegas several times before, it was one of my favorite meals ever."

12. "I went to Food Network star Geoffrey Zakarian's restaurant in Manhattan, the National Bar & Dining Rooms. I had amazing pork chop and grits."

"The Chopped judges are no joke!"

14. "A while ago, I went to Michael Chiarello's restaurant, Bottega, in Napa Valley, and it was some of the best food I’ve ever eaten to this day."

15. And finally: "Whenever we’re in LA, we go directly to Matsuhisa, Nobu Matsuhisa’s 'flagship' restaurant. The sushi is almost unbearably good, and his special dessert is a Hawaiian-style shaved ice/ice cream creation. It's so simple and truly amazing."

"Best thing, Mr. Matsuhisa is often cooking at this location, and he comes out to talk to his guests. I remember him asking our kids, when they were quite young, if they were enjoying their dinner. He’s a very kind and talented man."

I honestly can't believe I didn't know any of this.
2 DAYS AGO
extratv

Lance Kerwin, who became a teen heartthrob as the titular star of the coming-of-age drama series "James at 16," died Tuesday. He was 62. In a Facebook post, his daughter Savanah Kerwin wrote, "I am so sorry to those we have not been able to reach out to personally to notify but Lance Kerwin passed away yesterday morning. We appreciate all the kind words, memories, and prayers that have been shared. As the coming weeks progress, I will share more information about after life ceremonies."
CALIFORNIA STATE・1 DAY AGO
BuzzFeed

Drake's show had to be put on hold for 15 minutes while the man was treated.
NEW YORK CITY, NY・2 DAYS AGO
BuzzFeed

Everyone Is Talking About Kylie Jenner Wearing A Lion Head When We Should Be Talking About Doja Cat Covering Herself In 30,000 Crystals

It's low-key giving me anxiety.
2 DAYS AGO
BuzzFeed

Love is a battlefield, and people are losing the war every day.
2 DAYS AGO
BuzzFeed

Kylie Jenner And Doja Cat Had An Icy Interaction With Each Other, And Now It's A Meme

"When it is, in fact, not good to see each other."
2 DAYS AGO
BuzzFeed

Kylie Jenner Just Wore A Lion Head During Paris Fashion Week, And People Love It, Hate It, And Everything In Between

"I Know It's An Italian Sin, But It's How I Like My Pasta": People Are Fessing Up To The Food "Crimes" They're Knowingly Guilty Of

"I never brown my meat before making beef stew or recipes calling for ground beef. I use an Instant Pot and it does not make any difference in taste. And yes, I've tried it both ways."
1 DAY AGO
BuzzFeed

"His act of kindness changed her week. And in that moment, he changed my life — that was when I knew that he was it for me."
22 HOURS AGO
BuzzFeed

Ed Sheeran Made His Manager Carry Around A Picture Of The Weasley Twins For A Year, And 14 Other Secrets Celebs' Teams Revealed

In her tell-all book, Kris Jenner's former nanny claimed the momager "was grooming her children for their current celebrity status their entire lives."
56 MINUTES AGO
BuzzFeed

"When Ashton and Mila came in together in that scene, I thought that was really the icing on the cherry on the sundae of That '90s Show."
WISCONSIN STATE・1 DAY AGO
BuzzFeed

I'm still mad at How I Met Your Mother for killing off the mother just so Ted could end up with Robin.
2 DAYS AGO
BuzzFeed

"They literally jumped to the last quarter of the book within 15 minutes."
1 HOUR AGO
BuzzFeed

19 Moments I Absolutely Loved In "Glass Onion: A Knives Out Mystery"

Who knew Benoit Blanc was such a treasure.
CONNECTICUT STATE・2 DAYS AGO
BuzzFeed

When aliens come to Earth, one of the first works of art we show them should be the Derry Girls pilot.
1 DAY AGO
BuzzFeed

Natalie claims she and Shayne mutually agreed to not apply for the show while they were together.
1 DAY AGO
BuzzFeed

The "Parks & Rec" Reunion On "SNL" This Week Was As Hysterical As It Was Heartwarming — Like, I Am Not OK!

This weekend, I learned that the Parks & Rec group chat is still fully functional and so are my tear ducts.
2 DAYS AGO
BuzzFeed

Doja Cat Wore Eyelashes As A Beard And Goatee To Paris Fashion Week, And The Tweets Are So Chaotic

She's so unserious, and I love it.
21 HOURS AGO