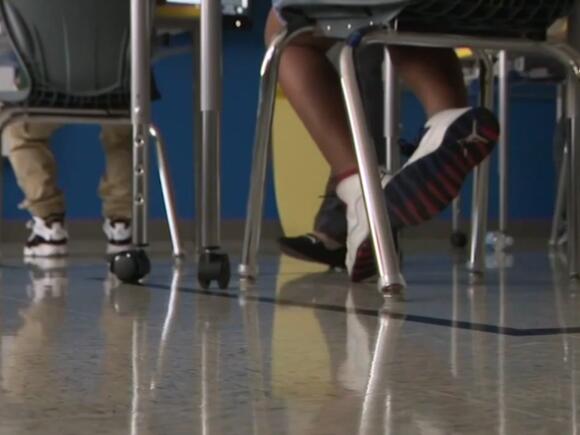 Ohio, Kentucky and Indiana all have "high" or "very high" levels of respiratory viruses — including the flu, according to CDC data. Those high levels of illness even forced some local school districts to start Thanksgiving break early.

Talawanda School District was closed Monday and Tuesday due to illness among staff and students, as well as a shortage of substitute teachers. Students will return after the holiday break, but there is a concern that gatherings over the holiday may the spreading of viruses even worse.

"This, as I can recall, is the earliest I’ve seen a school close," said Dr. Stephen Feagins, Hamilton County Director of Public Health.

One mother in the Talawanda School District said she was thankful when she got the call from her daughter's school about the closure.

"I’m kind of glad they canceled for the last two days because I’d rather her make it out and other kids that didn't get it make it out without getting it before going and being around elderly relatives for Thanksgiving," she said.

Huffman said the district sent out a letter to parents earlier in the year explaining that situations like this may happen.

"Kind of warning everybody, especially with transportation shortages, that they wouldn't be able to give us a big heads up on cancellations like this," Huffman said. "But I do feel for the parents that don't have that good support system for having someone to step in like grandparent and watch the kids when they're off like this."

Flu hospitalizations in Ohio are still much higher than average and they continue to climb. Another issue, Feagins said, is there is currently a shortage of Tamiflu.

"It's a little bit difficult to get, partly because we are early in the flu season, and they need to catch up with production,” Feagins said. "That's why washing your hands this thanksgiving is going to be more important than ever."

If you're hosting Thanksgiving, some precautions you can take include having hand sanitizer available for guests and paper towels for the bathroom, so guests aren’t using the same towel to dry their hands.

"Are you going to be around at-risk individuals, such as the elderly? You know we all have grandparents we want to be with," said Dr. Joseph Gastaldo with Ohio Health. "If you're going to be around other immunocompromised people, you may want to consider doing a rapid test right before you get together."

The Boone County high school student was expelled for a year after he allegedly threatened to shoot and kill several other students.
BOONE COUNTY, KY・19 HOURS AGO
WCPO 9 Cincinnati

Xenia police received several complaints of a naked man in the females’ locker room of the YMCA branch, which is located on Progress Drive in Xenia, according to the criminal complaint.
XENIA, OH・12 HOURS AGO
WCPO 9 Cincinnati

After urging people to stay away from the Little Miami River, Hamilton County Public Health announced a leak flowing into the river was not caused by a sewer line break.
HAMILTON COUNTY, OH・7 HOURS AGO
WCPO 9 Cincinnati

People convicted of domestic violence will no longer be able to legally possess a gun in Cincinnati, and legal gun owners are facing new safe storage rules after the mayor declared two new ordinances.
CINCINNATI, OH・4 HOURS AGO
WCPO 9 Cincinnati

Ohio Gov. DeWine set to give State of the State address Tuesday

Gov. Mike DeWine will give his State of the State address, in which he will discuss how he plans on using Ohioans' tax dollars, at noon on Tuesday.
OHIO STATE・2 DAYS AGO
WCPO 9 Cincinnati

The Cincinnati Police Department gun range in Evendale has people in the area concerned for their health.
HAMILTON COUNTY, OH・1 DAY AGO
WCPO 9 Cincinnati

Dayton-based Mikesell's closes its doors after 100-plus years

The company said on its Facebook page it intends to sell its brand and IP rights "to another quality snack food manufacturer, as soon as possible."
DAYTON, OH・21 HOURS AGO
WCPO 9 Cincinnati

Union Township police said first responders were sent to the 1000 block of Round Bottom Road for an employee who was trapped. He was pronounced dead at the scene.
MILFORD, OH・20 HOURS AGO
WCPO 9 Cincinnati

A woman suffered a heart attack after EMT paramedics gave her the wrong medication in the back of an ambulance, a lawsuit alleges.
7 HOURS AGO
WCPO 9 Cincinnati

On October 2, 1976, a farmer in rural Illinois found a young woman dead in a ditch. She was naked except for a sweater tied around her head, with a plastic bag and electrical tape over it.
CINCINNATI, OH・1 HOUR AGO
WCPO 9 Cincinnati

The federal trial against former Speaker of the Ohio House Larry Householder has been postponed until Tuesday after a juror tested positive for COVID-19, according to U.S. District Court.
OHIO STATE・3 DAYS AGO
WCPO 9 Cincinnati

Butler County has chosen altafiber as the company to bring high speed internet to the rural reaches of the county, a $10 million infrastructure project that will be funded with federal ARPA money.
BUTLER COUNTY, OH・2 DAYS AGO
WCPO 9 Cincinnati

In a sentencing motion filed Monday, Special Prosecutor Brad Tammaro pointed to that acquittal motion as a reason Reynolds should be incarcerated.
BUTLER COUNTY, OH・1 DAY AGO
WCPO 9 Cincinnati

Two wells that monitor groundwater for contamination at the former Beckjord coal plant were either missing or damaged for several months in 2022. But Clermont County officials never knew about it.
CLERMONT COUNTY, OH・3 DAYS AGO
WCPO 9 Cincinnati

'It was spooky': Duke Energy substation fire in Anderson Township lights up sky

Residents in Anderson Township captured photos and videos of fire and smoke at an electrical substation on Beechmont Avenue.
ANDERSON TOWNSHIP, OH・1 DAY AGO
WCPO 9 Cincinnati

St. Xavier and Withrow agreed to a home-and-home football series starting in Week 4 of the 2023 season at Withrow. The 2024 game is scheduled for St. Xavier.
CINCINNATI, OH・1 DAY AGO
WCPO 9 Cincinnati

The most comprehensive piece of legislation tied to benefits and compensation for our military isn’t necessarily perfect if you ask those helping veterans through the process of filing claims.
ERLANGER, KY・1 DAY AGO