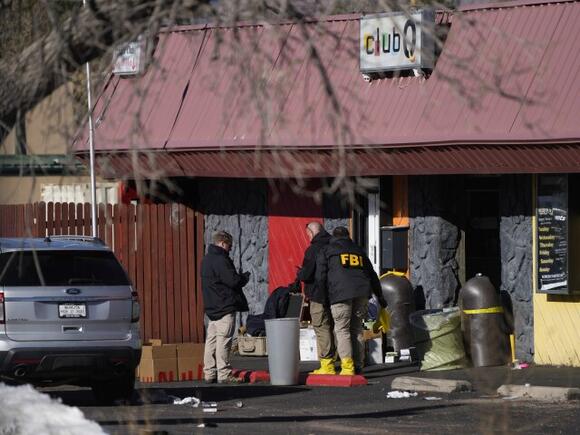 DENVER — The suspect in the Club Q shooting changed their name while living in Texas in 2016, saying they wanted to protect themself and their future from their father and his criminal history, according to court records obtained by Denver7.

A judge in Bexar County, Texas, granted Nicholas Franklin Brink’s request to change their name to Anderson Lee Aldrich on May 2, 2016, about two weeks after their grandparents — who were their legal guardians at the time — filed the petition on his behalf. Aldrich was 15 years old at the time but would turn 16 a few weeks later.

Aldrich’s grandparents wrote in the petition that Brink wanted to change their name to Aldrich because they “wishes to protect themself + their future from any connections to birth father + his criminal history.” It also says that the boy’s father, Aaron F. Brink, had no contact with his son “for several years.”

Nicholas Brink signed an exhibit agreeing to change his name to Anderson Lee Aldrich, as did both of his birth parents, Aaron Brink and Laura L. Voepel, according to other exhibits attached to the petition.

News5 has been working to uncover more about Aldrich’s past since they allegedly shot and killed five people and injured 19 other people in the shooting Saturday night at the popular LGBTQ+ nightclub in Colorado Springs.

Aldrich was arrested for investigation of 10 charges , including first-degree murder after deliberation and bias-motivated crime, but they have not been formally charged.

They were released from the hospital on Tuesday and will be booked into the El Paso County Jail. Aldrich will make their first appearance at 11:30 a.m. Wednesday, the Colorado State Court Administrator’s Office said.

Police have not released a motive in the shooting, but the club and people in the community feel they were targeted in the attack. Investigators are looking into whether there were possible bias-motivated reasons behind the shooting as part of the investigation, officials said this week.

The Colorado Springs police chief said Aldrich started shooting as soon as they walked into Club Q, and he and others have called two men – Richard Fierro and Thomas James – heroes for confronting and subduing the shooter.

News5 confirmed Monday through Laura Voepel’s former landlord that Aldrich was the same person arrested in June 2021 in El Paso County after making threats to their mother regarding bombs, weapons and ammunition.

Video obtained by Denver7 shows Aldrich streaming live on their mother's Facebook account that day, wearing tactical gear and surrounded by weapons, discussing himself being barricaded in the home.

But no charges were ever filed against them, and the case was sealed, so officials cannot discuss it because of state statutes — including information as to why charges were not filed.

Fourth Judicial District Attorney Michael Allen said Monday that in criminal cases like the Club Q shooting case, prosecutors can file motions to unseal past criminal records, so it’s possible the 2021 case is unsealed. Denver7 and other media outlets are working in court to get the past case unsealed.

But court records from Texas and California shed new light on Aldrich’s life both before and after he took that name, as well as the lives of his parents.

Records from Orange County, California, show they were born in San Diego County on May 20, 2000. The family lived there, in Cardiff-by-the-Sea until February 2001, when they moved to Lake Elsinore, California. That summer, Laura and Aaron separated, and Laura and Nicholas moved to an apartment in Lake Elsinore.

Aaron Brink filed for divorce from Laura in September 2001, when Nicholas was about 16 months old, and asked a court to give custody of Nicholas to Laura. In her response, Laura also asked for custody. A child custody order granted legal custody to Laura and no visitation to Aaron. It also stipulated he would eventually pay her $300 a month in child support.

Court records from 2007 show the marriage was terminated, Laura changed her last name back to Voepel from Brink, and a judge agreed with the 2001 custody and child support order.

At some point, according to the Texas court records and the name change petition, Nicholas’s grandparents took custody of him in Riverside County, California, and were named his legal guardians. The grandmother is Aldrich's maternal grandmother and her husband is his step-grandfather.

A court administrator in Riverside County said the guardianship case cannot be accessed because it is a juvenile custody case, so the exact details about why they were granted guardianship over Nicholas are currently unknown.

Aaron F. Brink has the same middle name as his son’s original middle name, Franklin, according to records. Public records show he has several criminal cases in southern California, including DUI and possession of controlled substance convictions.

Records show that Laura Voepel moved from California to San Antonio at some point during her son’s childhood. She and Aldrich’s grandparents have several of the same addresses there associated with each of them.

Criminal records show Voepel was charged with arson in January 2012, though the count was later reduced to criminal mischief. She was sentenced to five years of probation, but that was terminated on "unsatisfactory" grounds, according to records. Voepel’s grandfather is California Assemblyman Randy Voepel, R-Santee, who had praised the Jan. 6 insurrection at one point and has voted against LGBTQ legislation, but he lost the election this year and was not one of the grandparents who signed the name change petition.

Websites and internet archives also show that Brink appears to have been harassed online starting in June 2015, shortly after his 15th birthday and about a year before they changed their name. A page created on a website that appears to be devoted to online “drama” accused Brink, by name and without evidence, of pedophilia and criticizes his appearance.

The page also contains a screenshot of an image in which his grandmother was purportedly trying to raise money to send the teenager to Japan for a trip.

Archives show the page was updated dozens of times on June 12, 2015, and a few times over the next few months. But it had not been updated since Oct. 9, 2015, until the shooting at Club Q. The page has been updated in the days since the shooting to call him derogatory names which uses bigoted language. It still contains pictures purportedly of Brink as a teenager but has been updated to use his current name of Anderson Lee Aldrich.

The page also includes links to a YouTube account that purportedly belonged to Brink that contains an animated video rife with profanity that was uploaded in 2012 and which has gained a few hundred views since Tuesday morning.

The Church of Jesus Christ of Latter-day Saints also confirmed to News5 Monday that Aldrich was on a list of membership rolls but had not been active for years.

Hikers and bikers in Colorado Springs need to be aware that a series of projects will be happening at Red Rock Open Space over the next eight months.
COLORADO SPRINGS, CO・16 HOURS AGO