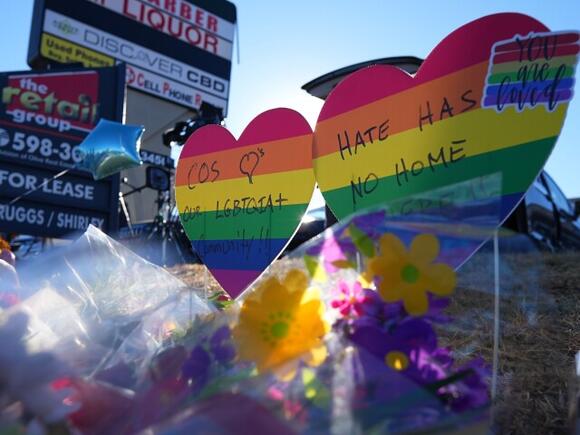 DENVER — The suspect accused of killing five people and injuring 19 others at Club Q in Colorado Springs was arrested last year and accused of making bomb and weapons threats against their mother, Denver7 Investigates has confirmed.

According to a June 18, 2021, news release from the El Paso County Sheriff’s Office, Aldrich reported a bomb threat just before 2 p.m. that day at a home in the 9800 block of Rubicon Drive. The sheriff’s office said that the person who reported the threat “said her son was threatening to cause harm to her with a homemade bomb, multiple weapons, and ammunition.”

Deputies eventually realized that Aldrich was at a home about a mile away, in the 6300 block of Pilgrimage Road, and was refusing to surrender. By 5:46 p.m., negotiators were able to get them to walk out of the home’s front door and surrender. Deputies cleared both homes and found no explosives, the sheriff’s office said at the time.

DA explains why he can't comment on prior incident

Michael Allen, the 4th Judicial District Attorney who oversees prosecutions in El Paso County, told Denver7 Monday he could not comment on why charges were not filed in the case because of two separate laws passed by the legislature in 2019 and 2021 that led to criminal cases in which charges were not ultimately filed being automatically sealed.

“If a case is sealed by state statute, I have to say that no such record exists even though there might be other information in the public sphere that says actually a case did exist,” Allen said, reiterating that he was speaking in a general sense and not about this case in particular. “And that can be frustrating for people to hear. It can sound like we’re trying to hide things.”

Allen said in a news conference Monday afternoon that when a person commits another crime after a previous case was sealed, prosecutors often file motions to unseal those cases to get more information to prosecute the current case.

Denver7 has also joined a lawsuit with other media organizations seeking to unseal the 2021 case.

But Aldrich’s mother’s former landlord, who was involved in reporting the threats to authorities and telling them of Aldrich’s whereabouts during the incident last year, said in an interview Monday she has questions about why charges were not pursued and if pressing charges might have made any difference in what transpired Saturday.

“I think what happened last year was pretty serious. And for the charges to just be dropped just does not make sense to me,” said Leslie Bowman. “So, you know, I don’t know if he had any prior record to that situation, but I think it was severe enough that it should have been dealt with in some way.”

“Even if it was some sort of plea deal with probation, that still would have prevented him from at least legally having a weapon,” Bowman added. “But, you know, it’s just very disappointing and upsetting that that was completely dropped.”

In addition to the interview with Bowman, Denver7 Investigates has connected Aldrich, their mother, and their grandfather, an outgoing California state assemblyman, through public property records and background checks.

Bowman said Aldrich’s mother, Laura Voepel, lived at her house for about 15 months, while Aldrich lived with their grandparents at their home about five minutes away. She owns the home in the 6300 block of Pilgrimage Road, while the grandparents live at the home on Rubicon Drive.

Bowman described Aldrich as quiet, about 6 feet tall and heavyset when they were around in 2020 and 2021. She said they would sometimes come over and watch movies with their mother in her room.

Bowman said she only one time ever got into an altercation with Aldrich, late one day when their mother’s bathroom wasn’t working, and they confronted Bowman.

“He kind of got in my face and told me to get out and she slammed the bedroom door in my face,” Bowman recalled. “But I just kind of took that as, at the time, you know, a young man trying to protect his mom kind of thing. And I just kind of blew it off because there was never any other issues after that up until the bomb threat situation.”

Bowman said on Jun 18, 2021, she was babysitting a friend’s children and Laura started texting her telling her the police were at her parents’ house looking for “Andy,” as she referred to her child. Then she started texting Bowman that she shouldn’t go back to her home.

“And I kind of read between the lines of all of her messages and figured out that the police were probably looking for him and that he was in my house,” Bowman said. “…So, I called the police and say, ‘Hey, I think you’re looking for someone who’s hiding out in my house.’”

Police confirmed with her that they were looking for Aldrich and told her Aldrich had had an altercation with their grandparents, had threatened them with a gun, and decided to go over to where their mom was living to hide from the police.

Bowman said she showed deputies Ring video from her doorbell that showed Aldrich come into the house and that they were still there. After Aldrich eventually surrendered to deputies, Bowman said authorities told her Aldrich had a gun, body armor and helmet inside the house.

Video obtained by Denver7 shows Aldrich streaming live on their mother's Facebook account that day, wearing tactical gear and surrounded by weapons, discussing themself being barricaded in the home.

Bowman said she tried to move on since they had lost communication, and investigators did not follow up with her. But on Oct. 18, she said, law enforcement came to her house trying to conduct a wellness check on Voepel. She told them they hadn’t spoken in more than a year.

“So that kind of prompted me to go back online and see what the status of Andy’s case was and couldn’t find anything in the court dockets or inmate records,” Bowman said.

She said she looked up news articles and found an update the charges had been dropped and the case was sealed.

Bowman said when she heard officials say Aldrich’s name Sunday morning, she was “shocked and heartbroken.” She assumes that Aldrich’s mother pushed for the charges to be dropped.

The State Court Administrator’s Office said just before noon Sunday that it did not have any “public records” tied to Aldrich in Colorado. Sealed records would not be considered public records.

Allen, the district attorney, said the laws passed by the legislature were aimed at protecting people charged with crimes that were later dismissed.

“The case, for some reason, ends up getting dismissed – whether it’s from the prosecution or the court – and get that off of the person because of due process, right?” Allen said. “It means that somebody was not convicted. So, should they have to walk around with that around their neck for the rest of their lives? That’s really what the statute is designed to do.”

“It can cause frustration in the public, though, when we have to say, no record exists,” he added.

The case and the decision — for whatever reason — not to file charges in the case is being further scrutinized because law enforcement officers and private citizens can petition to have guns removed from people proven in court to pose a threat to themselves or others for up to 364 days under Colorado’s Extreme Risk Protection Order (red flag) law . El Paso County’s sheriff has been one of several sheriffs in Colorado that have opposed the law.

Denver7 Investigates has also confirmed that Aldrich is the grandchild of California State Assemblyman Randy Voepel , R-Santee, who initially made statements in support of the Jan. 6 insurrection in a San Diego Union-Tribune article , though he later said he condemned the violence. Some groups called for his expulsion after the comments. Voepel was handily defeated in this year’s election by 35 percentage points.

Laura Voepel, Aldrich’s mother, posted to Facebook in April 2020 to “keep up the work dad.”

Bowman said Laura Voepel had told her that Randy Voepel was also her father.

“Yeah, I was aware that Laura’s dad was in some sort of government position, or mayor, or something out in California,” she said. “But I didn’t really know the details of it. But I do remember Laura telling me about that one.”

What comes next in the case?

“I have never encountered a person who had engaged in such heroic actions that was so humble about it,” Colorado Springs Mayor John Suthers said at a Monday afternoon news conference after talking with Fierro.

Allen, ahead of the news conference, said his office and other officials would not be able to comment much further on Aldrich’s past encounters with law enforcement. He also said at the news conference that if anything changed, he would release further details.

“I would rather be safe at the front end about what we say or don’t say so that we can have a fair process, and if we convict somebody, that that conviction is upheld.”

Suthers said he would caution against any assumptions regarding whether the red flag law could have been applicable in the case and cautioned speculation.

“My view of the red flag law is it was passed by the legislature, it’s the law in Colorado, and law enforcement agencies, in appropriate circumstances, should take advantage of it. That’s my view,” Suthers said.

Aldrich was arrested for investigation of 10 charges , including first-degree murder after deliberation and bias-motivated crime, but formal charges have yet to be filed.

Even with several sub-zero mornings this season, meteorological winter for Southern Colorado hasn't been as cold as it could be.
COLORADO SPRINGS, CO・1 DAY AGO
KOAA News 5 Southern Colorado

There are still a few more patient slots open, so they have extended the application deadline to this Friday, February 10th.
COLORADO SPRINGS, CO・5 HOURS AGO
KOAA News 5 Southern Colorado

'Earn and Learn', Innovative culinary apprenticeship launching in The Springs

“We need to revitalize, we need to get people back into the workforce." A new paid culinary apprenticeship program is starting in Colorado Springs
COLORADO SPRINGS, CO・1 DAY AGO
KOAA News 5 Southern Colorado

Hikers and bikers in Colorado Springs need to be aware that a series of projects will be happening at Red Rock Open Space over the next eight months.
COLORADO SPRINGS, CO・5 DAYS AGO