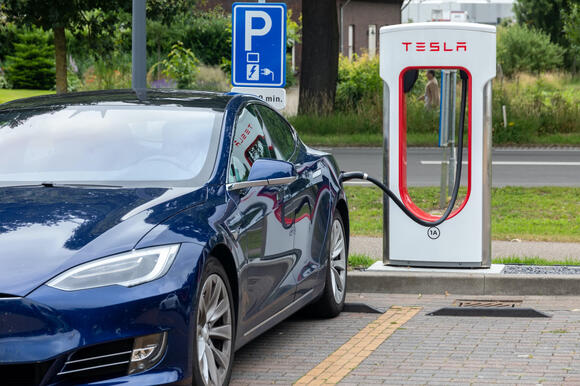 In minds and numbers, Tesla remains the star of the automotive industry.

The manufacturer continues to collect trophies and consolidate its position as the world leader in the electric-vehicle market. For example, the group accounted for two-thirds of new EV registrations between January and August in the U.S., according to data from Experian.

Two of its models, the Model Y SUV and the Model 3 entry-level sedan, occupy the first two places on the list of the bestselling electric vehicles on the American market with, respectively, 134,978 units and 123,634 units sold. Ford's Mach-E SUV comes third with 25,596 units sold.

And the top 5 are completed by the Tesla Model S and the Model X. Sure, the competition is gaining market share, but the Austin automaker is still the giant of the industry.

$580 Billion of Market Value Wiped Out

At the same time, in recent months Tesla's star has been fading. Once a daily star on the New York Stock Exchange and a boldface name on social media, Tesla seems to have almost disappeared, except in the context of its stock-market slump.

Tesla stock is down 52% this year, translating to a $580 billion drop in market capitalization. By comparison, GM shares have lost 32% of their value this year and Ford shares are down 31%. In the past, it was often the opposite: Tesla performed much better than its rivals and compatriots.

Having lost half its market value, the company was overtaken by Berkshire Hathaway (BRK.A) - Get Free Report, (BRK.B) - Get Free Report the holding company of legendary investor Warren Buffett, in the ranking of the largest companies on that basis.

The fundamentals of the company are, however, very solid. For the third quarter Tesla posted adjusted earnings before interest, taxes, depreciation and amortization of almost $5 billion, up 55% year-over-year, while revenue jumped 56% to $21.5 billion.

The company also has a clear roadmap: Tesla on Dec. 1 is to deliver its first Semi truck to PepsiCo (PEP) - Get Free Report and in mid-2023 will start producing the highly anticipated Cybertruck. Those are to be followed in 2024 by the new-generation Roadster and the first model in its line of autonomous vehicles. The company also plans to produce Optimus, its humanoid robot, beginning in 2023.

Covid-19's resurgence in China is causing concern that production at Tesla's Shanghai factory might be interrupted. But that's not the key factor in the stock's drop, which has been going on for quite some time.

Analysts and investors attribute the tumble in the stock to CEO Elon Musk's acquisition of the social network Twitter.

"$TSLA continues to underperform (TSLA -20% vs [Nasdaq 100 Index] +3%) since Elon completed his purchase of TWTR on 10/28," Tesla investor Gary Black said. "This reflects investors’ concern that TWTR’s loss in ad [revenues] will require more capital from @elonmusk and continued uncertainty about China sales and pricing."

Since completing the purchase of the platform for $44 billion on Oct. 27, the billionaire has spent most of his time talking about Twitter. The rare few times he's mentioned Tesla's name come when he's asked a question on social media.

Musk is the craftsman, architect and lead ambassador for Tesla. Prior to Twitter, the tech tycoon promoted the EV company almost on a daily basis, which helped keep the brand in conversation.

Since Twitter, the automaker now appears less of a priority for Musk, who is trying to find sources of revenue to turn the microblogging platform profitable.

He is currently devoting all his energy to it -- after he caused chaos there less than a month after taking the helm. He laid off nearly 70% of the firm's 7,500 employees and reactivated the account of former President Donald Trump. This latest decision worries advertisers, who do not want to have their brands associated with racist and hateful language as well as misinformation.

The serial entrepreneur recently admitted that since taking over Twitter, he hardly sleeps.

"I have too much work on my plate, that's for sure," Musk said on Nov. 14 during an appearance at B20 Indonesia, a business conference running alongside the G20 summit in Bali. "I'm working the absolute most that I can work -- morning to night, seven days a week."

A few days earlier Musk also told attendees at the 29th annual Baron Investment Conference that his workload has increased from 70 hours a week to 120.

"But, I think once Twitter is set on the right path, it will be much easier to manage than SpaceX or Tesla."

Get Action Alerts PLUS + Quant Ratings investing insights for one low price.

This revenue problem is easy to fix. Musk can charge 7.99 per month for each seatbelt and headrest to actually work in an accident.

tesla is a fad. like popcorn textured ceilings. it will lose its " gotta have the latest and greatest car"

Your kidding yourselves look around Teslas are the number 1 EV and by next year they will be the number 1 car sold overall. The only thing that will slow them down is cheap oil and with Biden in office not much chance of that!

Shares of Lucid Motors rose on Friday after rumors of being acquired by a Saudi Arabia fund.
1 DAY AGO
TheStreet

Legacy carmakers and upstarts are all battling to compete with Tesla. But for CEO Elon Musk, his main rival is not who you think.
3 DAYS AGO
TheStreet

Is Tesla Stock a Buy or Sell on Earnings? The Chart Hints.

Tesla stock is reacting well to the earnings report but it's also trading right into a resistance zone.
2 DAYS AGO
TheStreet

The world's largest automaker by sales volume just made a big change to its C-Suite.
CALIFORNIA STATE・2 DAYS AGO
TheStreet

Ford Recalls Nearly Half a Million Models for Safety Flaw

California is on a mission to ban a hazardous chemical that gives chrome its distinctive shine, a move that has angered those working in, and linked to, the car restoration and customization industries across the state. According to the board item summary from the California Air Resources Board (CARB), it...
CALIFORNIA STATE・17 HOURS AGO
TheStreet

House (Literally) on Fire in Viral Zillow Photo Now Under Contract for $1.5 Million

A wild story emerges about a man who found the perfect house, except there was one major problem.
3 DAYS AGO
Business Insider

The woman, who works in the product, sales and strategy ops, has not yet heard from Google about the status of her maternity leave benefits.
ARIZONA STATE・3 DAYS AGO
msn.com

The global oil market remains tight according to Saudi Aramco, the largest oil producer in the world. And that does not bode well for a world that still relies heavily on fossil fuels. Disclaimer: We adhere to strict standards of editorial integrity to help you make decisions with confidence. All...
23 HOURS AGO
Business Insider

Amid an onslaught of tech layoffs, here are 12 major tech companies that haven't announced any job cuts in the past 6 months

It may seem like every well-known tech company has had layoffs in the last few months, but there are still some holdouts, including Apple and Nvidia.
19 MINUTES AGO
TheStreet

'If it's a smooth year ... without some big supply chain interruption or massive problem, [we] have the potential to do 2 million cars this year,' Musk says
TEXAS STATE・2 DAYS AGO
TheStreet

Sam's Club Has a Bold New Challenge for Costco

The retail giant has a big plan to disrupt an industry juggernaut.
GEORGIA STATE・1 DAY AGO
TheStreet

The fast food chain is testing an environmentally conscious concept and likely plans to implement it more broadly.
1 DAY AGO
TheStreet

Billionaire Barry Sternlicht Thinks He Knows When Recession Will Hit

2023 is shaping up to be a rough year for Americans and Barry Sternlicht has a timeline for when a recession might reach our shores.
2 DAYS AGO
TheStreet

The CEO of the EV manufacturer says the group has received twice as many orders as it can produce.
3 DAYS AGO
TheStreet

2 FAANG Stocks Investors Should Buy Hand Over Fist for 2023

Two of these stocks haven't been this cheap since the FAANG acronym came into existence.
35 MINUTES AGO
TheStreet

Elon Musk and Tesla Dare Their Rivals to Challenge Them

The billionaire CEO has unshakeable confidence that Tesla will maintain its dominant market position.
2 DAYS AGO
The Motley Fool

Unlikely Pairing: A Long-Term Investor's Take on the Top 3 Cryptocurrencies

Both Bitcoin and Ethereum look like good long-term investment plays.
14 MINUTES AGO
TheStreet

The fast-food giant has put lots of new Whoppers on its menu but its latest "hit" is a little different.
2 DAYS AGO