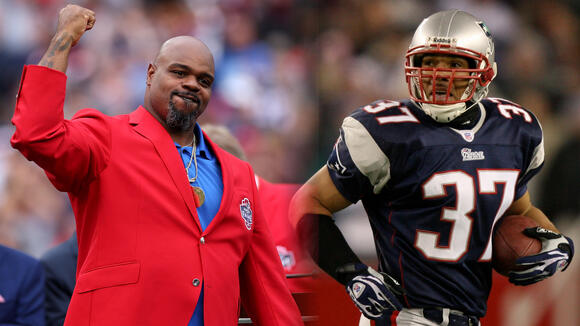 BOSTON -- A pair of Patriots Hall of Famers are one step closer to claiming a spot in Canton. Former New England nose tackle Vince Wilfork and safety Rodney Harrison are among the 28 semifinalists for the Pro Football Hall of Fame's modern-era class of 2023.

Both have been a semifinalist twice before: Wilfork in each of the last two years and Harrison in 2021 and 2023. Neither has been named a finalist in their quest for the Hall of Fame.

Wilfork and Harrison both have a special place in the hearts of New England fans and Bill Belichick, who always speaks glowingly of his two former players. Wilfork played 11 of his 13 seasons with the Patriots, winning a pair of Super Bowls while earning five Pro Bowl nods. Belichick often refers to Wilfork as the best nose tackle that he's ever coached.

Harrison played six of his 15 NFL seasons with the Patriots, and also won a pair of Super Bowls (along with a Pro Bowl nod and a First-Team All-Pro selection) during his time in New England. Harrison is also the only defensive back in NFL history to record 30 sacks and 30 interceptions during their career.

Wilfork was inducted into the Patriots Hall of Fame in September, while Harrison was inducted in 2019. Maybe this is the year the two will add a gold jacket to their collection to go along with their red jacket from the Patriots.

Two other former Patriots are also semifinalists for the Pro Football Hall of Fame: corner Darrelle Revis and running back Fred Taylor. Revis, who played one season in New England and won a Super Bowl with the Patriots in 2014, is a finalists for the first time. Taylor, who closed out his career with two seasons in New England in 2009 and 2010, is a finalist for the fourth time.

The semifinalists will be whittled down to 15 before the Hall of Fame's 49-person selection committee selects the Class of 2023 ahead of Super Bowl LVII. The class will be announced live during the "NFL Honors" broadcast on Feb. 9.

BOSTON -- Travis Kelce has drawn even with an all-time Patriots great in one statistical category, and he's passed another all-time Patriots great in two others.With the Chiefs advancing to the Super Bowl this year, Kelce has been the driving force on Kansas City's offense, catching 21 passes for 176 yards and three touchdowns in the Chiefs' two games thus far.In the process, he's passed Julian Edelman in all-time career playoff receptions and receiving yards, and he's tied Rob Gronkowski on the all-time postseason touchdown list.Here's a look at where they all stand:Postseason receptions, all time1. Jerry Rice, 151 2....
9 HOURS AGO
CBS Boston

BOSTON -- The Patriots' offense under Matt Patricia and Joe Judge did not go well. Prior to the season, Bill Belichick instructed everyone to blame him if that process did not succeed.A new report suggests that Belichick wasn't necessarily a hands-off leader during his team's offensive struggles, as Albert Breer reported Monday that the head coach spent parts of the 2022 season stepping in to make some calls on offense."My understanding is Belichick was active on the headsets on game day, having the sort of oversight over the offense that he'd traditionally had over the defense, and moonlighting as play-caller...
BOSTON, MA・14 HOURS AGO
CBS Boston

BOSTON -- We live in a bit of a reactive time, so let's start with two things.One, there was no single call or moment that could have or would have changed the outcome of Sunday's NFC Championship Game in Philadelphia. The Eagles were a lot better than the 49ers, and nobody doubts that.Second, with the moment we're about to question, it is indisputable that 49ers head coach Kyle Shanahan could have and should have thrown his challenge flag. His failure to do so has nothing to do with the NFL and its officiating headquarters in New York.Now, with that being...
PHILADELPHIA, PA・15 HOURS AGO
CBS Boston

Longtime friend and colleague on what O'Brien will bring to Pats

BOSTON -- Folks around New England have a pretty good idea of who Bill O'Brien is, considering he's a native New Englander himself. We also got a pretty good idea of what O'Brien will bring to the sideline for the Patriots thanks to his first run with the team from 2007-11.The fiery O'Brien is back in Foxboro and once again at the helm of the New England offense. He was officially hired as the team's offensive coordinator and quarterbacks coach last week. The move gives the Patriots a true offensive mind to run that side of the ball, and Mac...
FOXBOROUGH, MA・12 HOURS AGO
CBS Boston

BOSTON – There are expected to be a number of teams chasing after Tom Brady if he opts to return and play at 46 years old. But according to a new report, the Miami Dolphins are not expected to be one of them.League sources told ESPN's Adam Schefter that the Dolphins are committed to Tua Tagovailoa for 2023 and are "pleased with his development."Miami was seen as a potential landing spot for Brady because it's close to his family in Florida, and the Dolphins have talent on the offensive side of the ball.The Dolphins lost their 2023 first round draft pick after the NFL found the team tampered with Brady and Saints head coach Sean Payton while they were under contract. Those violations happened from 2019-2022, including when Brady was on the Patriots.Brady has not yet said if he plans to play another season, and added that he will take time to make the decision.
FLORIDA STATE・1 DAY AGO