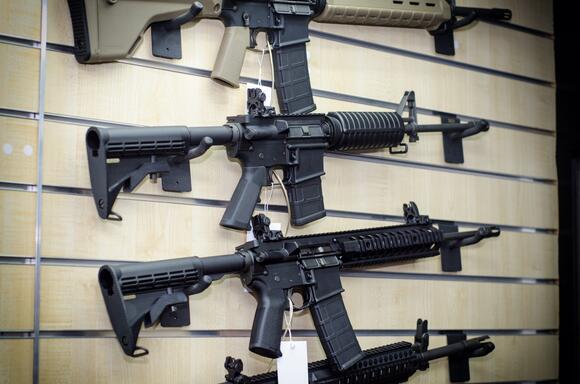 (WBBM NEWSRADIO) — The Illinois State Police Department (ISP) has taken additional steps to keep weapons out of the hands of those who may be a clear and present danger to themselves and others.

State police said that, instead of requiring a clear and present danger to be “imminent” or “impending,” authorities will revoke Firearm Owner Identification (FOID) cards from people who exhibit physical or verbal behavior like suicidal threats.

Additionally, reports submitted to state police from certified medical professionals, school administrators or law enforcement agencies will be kept for five years. That’s in case that person applies for a FOID card during that time.

“When determining whether to issue or revoke a FOID card, it is imperative ISP has as much information and evidence as possible,” said ISP Director Brendan F. Kelly in a press release. “Updates to this administrative rule will strengthen ISP’s ability to keep firearms out of the hands of dangerous individuals.”

Police said the Highland Park shooting on the Fourth of July prompted changes to the Clear and Present Danger rule.

The rule will be included in the upcoming Illinois Register.

State police have also come out with a model policy for law enforcement to follow when enforcing a Firearms Restraining Order to take weapons away from those at risk of harming themselves or others.

A Police officer on the job for less than a year in St. John, Indiana has an uncertain future after being charged with a felony for shooting at an off-duty Hammond officer late last year.
SAINT JOHN, IN・4 HOURS AGO
WBBM News Radio

Three suspects were arrested in Chicago this week for allegedly stealing more than $1,600 in perfume and other items from a west suburban Walgreens and leading police on a high-speed chase.
CHICAGO, IL・2 HOURS AGO
WBBM News Radio

The sheriff of DuPage County has now issued his own new statement on the state’s assault weapon ban and his recent meeting with other DuPage officials.
DUPAGE COUNTY, IL・1 DAY AGO
WBBM News Radio

A Hammond man was arrested in Munster last night after, police say, he rammed police vehicles in a stolen Jeep and an officer fired shots at the Jeep.
MUNSTER, IN・3 HOURS AGO
WBBM News Radio

An 80-year-old man shot one of two offenders who forced their way into his home near O’Hare International Airport Monday, according to the Chicago Police Department.
CHICAGO, IL・2 DAYS AGO
WBBM News Radio

A south suburban SWAT team raided Amir Worship’s Markham home in May of 2019 while executing a search warrant for his mother’s then boyfriend. Family attorneys said, despite cooperating with police, a Richton Park officer shot the boy in his knee.
RICHTON PARK, IL・1 DAY AGO
WBBM News Radio

The 27-year-old Uptown woman originally charged with a felony for vandalizing a police memorial has now pleaded guilty to a misdemeanor and was sentenced to probation.
CHICAGO, IL・58 MINUTES AGO
WBBM News Radio

Woman charged with concealing death of mother, whose body was found in freezer at their Portage Park home

A woman has been charged with concealing the death of her 96-year-old mother, whose body was found in a freezer in the garage of their Portage Park home earlier this week.
CHICAGO, IL・20 HOURS AGO
WBBM News Radio

Police are investigating the stabbing of a woman in a Southwest Side business late last night. The stabbing happened inside a business in the 3800 block of South Arche at Archer and Pershing in the Brighton Park neighborhood.
CHICAGO, IL・6 HOURS AGO
WBBM News Radio

15-year-old girl shot in the face on Southwest Side: Police

The girl, 15, was traveling in a car at 63rd and Nashville when someone inside another car pulled up alongside her and opened fire, Chicago police said. She suffered a gunshot wound to the face and was taken to Holy Cross Hospital in good condition.
CHICAGO, IL・6 HOURS AGO
WBBM News Radio

Pratib Ranjit, a 24-year-old from Glenview, has been charged with felony aggravated battery and felony unlawful restraint in connection to an attempted kidnapping this week. The attempted kidnapping happened Monday afternoon near Milwaukee Avenue.
GLENVIEW, IL・2 HOURS AGO
WBBM News Radio

A driver struck and killed a 77-year-old man who was attempting to cross a street Wednesday, Naperville police said. Police said the man was trying to cross Brom Drive at Martin Avenue around 1 p.m. when he was hit by a Chevrolet SUV.
NAPERVILLE, IL・6 HOURS AGO
WBBM News Radio

A former teacher at St. Stanislaus School in East Chicago who was removed from the school last October for allegedly threatening students and herself will go on trial in September for felony intimidation.
EAST CHICAGO, IN・1 DAY AGO
WBBM News Radio

Fifteen years and thousands of leads later, police in Tinley Park are still searching for the person who killed five women inside a Lane Bryant store. A new detective has been added to the case and the department has also issued a new sketch.
TINLEY PARK, IL・7 HOURS AGO
WBBM News Radio

DuPage County officials and the county’s sheriff have come to an understanding about the state’s new assault weapons ban. DuPage County Board Chair Deborah Conroy said she sees no reason right now to bring up a censure resolution against the sheriff.
DUPAGE COUNTY, IL・2 DAYS AGO
WBBM News Radio

The Rolling Meadows High School administration has told parents and students in a letter that there is a growing problem of catalytic converter thefts in the school’s parking lot.
ROLLING MEADOWS, IL・2 DAYS AGO