From movie and TV reviews, to recaps and celebrity news, What To Watch helps readers sort through the latest shows, movies and technology, and get closer to the entertainment they love.

Fans blast All American's JJ after epic blowup with Jordan 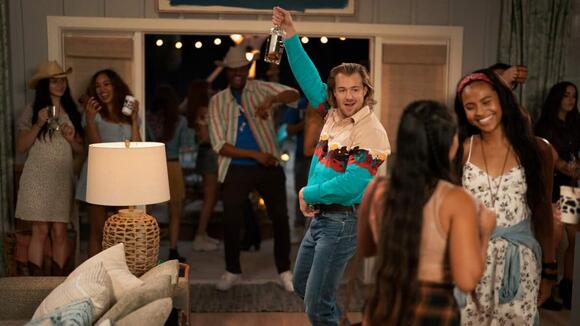 Since the beginning of All American season 5 , fans have noticed that the once loveable party boy JJ (Hunter Clowdus) has not quite been himself.

While he's always been one to search out a good time, since becoming a freshman at Coastal California College, his appetite for alcohol and late nights has seemed to grow. So much so that his collegiate football dreams are in danger of going up in smoke. His stereotypical frat boy behavior has now even taken a toll on his friendships, which ultimately led to an epic blowup between him and Jordan (Michael Evans Behling).

In an episode titled "Can't Nobody Hold Me Down" that aired on November 21, Asher (Cody Christian) makes a comment to Jordan about JJ's continual practice of throwing parties at their beach house. It's a routine that is wearing thin with Asher, but that Jordan has so far shrugged off.

However, when talking to Layla (Greta Onieogou) about his friend's inability to take anything seriously these days, she points out to Jordan that perhaps JJ is acting out because he misses the unity the Vortex friend group once had while in high school. She even encourages him to be there to support him.

Fast forward to the "calm Tuesday" fraternity event that JJ throws at the beach house. What JJ marketed as calm is anything but, as guests have to roll dice to determine the number of shots they need to take, the music is shaking the walls and there is a mechanical bull.

Feeling disgusted by the turn of events and realizing JJ is out of control, Jordan attempts to tell his friend to cut down on the drinking and end the party. But JJ tells his friend he's boring and attributes that to Layla. JJ elaborates on his point saying that Jordan is rather lame when in a relationship, first with Simone (Geffri Maya) and now with Layla.

Then things take a very dark turn when JJ calls out Layla's history among the friends. He notes that first she was with Asher, then it was Spencer (Daniel Ezra) and now it's Jordan. JJ then supposes he'll just wait his turn, which enrages Jordan. The latter punches JJ in the face and the two then roll around the living room floor fighting each other until JJ's fraternity brother pulls Jordan away.

When Jordan recaps what happened with Asher, JJ catches the two talking and makes the declarative statement that he's moving out. He accuses his friends of being "grandpas" since they’ve gotten to college and claims he's going to go live with people that are more his age — his fraternity brothers. The last words JJ utters is he hopes they can find someone to cover his portion of the rent.

We aren't sure what's really going on with JJ, but we hope things resolve themselves soon. There is already enough tension in the Vortex group because of Olivia 's (Samantha Logan) recent news story.

The once fan-favorite certainly didn't earn any brownie points with viewers. Several people were quite upset with JJ for his antics. Jordan on the other hand is getting a lot of love.

New episodes of A ll American season 5 air on Mondays at 8 pm ET/PT on The CW. Episodes become available to stream for free the next day on The CW App .

All American season 5 fans again find themselves exhausted by Coop, unhappy to see her be so hostile with Olivia. Here's what they’re saying.
4 DAYS AGO
Outsider.com

Mike Wolfe honored his late friend and mentor, Elmer Duellman, with an entire episode of American Pickers on January 18. Duellman, who owned Elmers Auto & Toy Museum with his wife, Bernadette, died in August 2019. After Duellman’s passing, Wolfe paid tribute to him in a Facebook post. In it, he explained that the two had been close for 25 years. And he fondly remembered Duellman as being “a big kid at heart.”
2 DAYS AGO
WhatToWatch

The Masked Singer US season 9: release date, panelists, everything we know about the celebrity singing competition

It's time for The Masked Singer season 9. Here's everything we know about the US version of the reality singing competition featuring masked celebrities.
3 DAYS AGO
Herbie J Pilato

The Troubled and Redeemed Life of Former Teen Idol Leif Garrett, Who's Now 61

According to journalist Lia Beck and Yahoo! Life, "In the 1970s, Leif Garrett came to fame as a teenage actor on shows including Three for the Road, Family, and The Odd Couple. From there, he launched a successful singing career—though it wasn't always his voice on those recordings—and was a fixture in Tiger Beat magazine and on the walls of his teen fans. But, in the years since Garrett was a teen idol, he has been through hard times, including drug addiction and legal problems. Now 60 years old, the actor has opened up about his struggles and his career in a memoir and in interviews."
1 DAY AGO
WhatToWatch

Brookside fans get a chance to rewatch the legendary soap

Lockwood & Co cast: who's who in the supernatural drama

Emmerdale spoilers: Nicola King is brewing up a SECRET PLAN!

EastEnders fans sobbed as they spotted a devastating clue that Lola Pearce-Brown's tragic death could happen soon.
1 DAY AGO
WhatToWatch

Cheat: release date, how it works and all about Danny Dyer's new quiz show

Cheat on Netflix is a quiz show with hosts Danny Dyer and Ellie Taylor.
3 DAYS AGO
WhatToWatch

Former EastEnders star Charlie Brooks has hinted that Janine Butcher could be returning to the soap sooner rather than later.
4 DAYS AGO
WhatToWatch

Emmerdale spoilers: Charity Dingle STEALS a car and forces CAIN along for the ride… Why?

‘Nepo babies’ claim their parentage is overblown. Truth is, they’re helped all the way | Martha Gill

From Kaia Gerber to Lily-Rose Depp, celebrity offspring are making a mockery of meritocracy
2 HOURS AGO
WhatToWatch

Sort Your Life Out season 2: air date, families, makeovers, trailer and all we know

Sort Your Life Out season 2 is here, with declutter queen Stacey Solomon helping more families to transform their homes.
3 DAYS AGO
WhatToWatch

Law & Order: SVU fans are again disappointed as Olivia and Stabler don't move the needle on their romance. Here's what happened and what viewers are saying.
1 DAY AGO
WhatToWatch

David Ames on his guest role in The Madame Blanc Mysteries: 'Sally Lindsay wrote the part for me!'

In Lockwood & Co. episode 3, Lockwood, Lucy and George take on a dangerous job in Berkshire. Will they make it out in one piece?
1 DAY AGO
WhatToWatch

EastEnders viewers wonder “what has happened” to long-standing character — and predict a sticky end!

The stress of life on Albert Square is taking its toll, EastEnders fans reckon….
3 DAYS AGO
WhatToWatch

Magazine Dreams sees Jonathan Majors flex his acting and literal muscles in a stunning role as a bodybuilder dealing with mental health and other issues.
1 DAY AGO
WhatToWatch

The Company You Keep: release date, cast, trailer and everything we know about the TV drama

A new crime drama on ABC, The Company You Keep stars Milo Ventimiglia. Here is everything else you need to know about the show.
4 DAYS AGO

From movie and TV reviews, to recaps and celebrity news, What To Watch helps readers sort through the latest shows, movies and technology, and get closer to the entertainment they love.