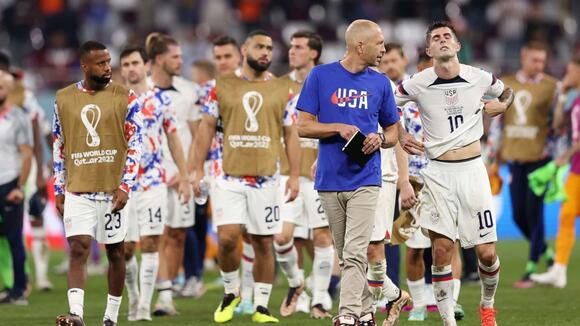 After years of controversy around its location, the 2022 World Cup is underway in Qatar.

There have been allegations of payoffs to FIFA members to earn the bid, criticism of Qatar's laws against women and LGBTQ individuals , the deaths of migrants used to build the sparkling new stadiums and even last-second controversy over beer sales . The tournament was also moved from its usual summer timeframe to the holiday season to avoid Qatar's intensely hot weather.

MORE: Why the Qatar soccer World Cup is so controversial

But on the field, the best players in the world -- such as Lionel Messi, Cristiano Ronaldo and Neymar -- are ready to go. And the U.S. is back with a hungry, young team after failing to qualify for the last World Cup.

Members of Team USA are already looking ahead to 2026, when North America will host the next World Cup.

“The future’s really bright for this team,” defender Walker Zimmerman said on “Good Morning America” on Monday. He added, “So many players from different backgrounds that creates a really unique mix of players. To have the youth that we have -- to have young players playing at high-level teams, we’re going to be coming back stronger in 2026.”

There were highs and lows in Qatar, he said, but it was the honor of a lifetime to play in the World Cup.

Midfielder Kellyn Acosta agreed, saying playing in Qatar had been a “childhood dream become a reality.” Both said they’d watched footage of fans cheering them back on in the USA. “We appreciate the support,” Acosta said. But, Zimmerman said, it’ll be nice to be on “home soil” in 2026. Dec 3, 4:15 PM Argentina heads to round of 8 after defeating Australia

Argentina is headed to the round of 8 after defeating Australia 2-1 in the knockout round.

The win sends Argentina to a quarterfinal match with the Netherlands on Friday. Whichever team wins will proceed to the semifinals. Dec 3, 12:02 PM US defeated by Netherlands 3-1, out of the World Cup

The U.S. is out of the World Cup after losing 3-1 to the Netherlands in Saturday's knockout round match.

At the halftime mark, the Netherlands leads the U.S. 2-0 in the knockout round match.

The winner of the match will move on to the final eight. The loser will go home. Dec 2, 5:13 PM US-Netherlands kicks off knockout round Saturday

American sports fans are used to watching big college football games on the first Saturday of December, but international football will be on the menu this year.

The U.S. will take the field for a knockout round match against the Netherlands on Saturday at 10 a.m. It's simple: win and you move on to the final eight, lose and you go home. There will be no draws like the group stage. The best news for the U.S. is that Christian Pulisic has been cleared to play and will likely start against the Dutch, who are ranked eighth in the FIFA world rankings. They will need Pulisic to anchor the team up front.

Incidentally, the U.S. player who set up Pulisic for the game-winning goal against Iran, Sergino Dest, was born and raised in the Netherlands. His father, however, is from Brooklyn, New York, and he chose to side with the Americans over the Dutch several years ago.

It won't be easy for the U.S. to advance though. The Dutch are given a 66% chance to win, according to FiveThirtyEight's match predictor , and the tandem of forward Cody Gakpo and midfielder Frenkie de Jong has been formidable.

The second match on Saturday (2 p.m., Fox) will be Australia against Argentina. The Argentinians, led by the legendary Lionel Messi, will be a big favorite. (In fact, FiveThirtyEight gives them an 83% chance of winning, tied for the largest of any round of 16 game.) The winner will face the winner of USA-Netherlands next week. Dec 2, 4:07 PM Switzerland clinches last spot in knockout rounds

Switzerland picked up a 3-2 win over Ghana to advance to the knockout stage of the World Cup as the second-place team in Group G.

Brazil, which lost to Cameroon 1-0, had already qualified for the knockout stage with wins in their first two games. The win by Switzerland moved them into a tie with Brazil at 6 points, but the perennial favorites took the group on goal differential. Still, the loss was the first for Brazil in a year and a half. They also hadn't lost in a group stage in their last 17 World Cup games. Cameroon's Vincent Aboubakar scored in the 92nd minute to get the win. He immediately removed his shirt in celebration, which earned him his second yellow card of the match and elimination from the match. Neymar, still recovering from injury, did not play for Brazil. The team also started its backup goalkeeper.

Switzerland trailed 2-1 briefly in a heated match that even broke into an altercation in stoppage time. For the Swiss, Xherdan Shaqiri scored in the 20th minute, Breel Embolo scored in the 44th minute and Reemo Freuler scored in the 48th minute.

American star Christian Pulisic, who was injured scoring against Iran in the final group match, has been cleared to play against the Netherlands in the first knockout match of the tournament.

Pulisic had been listed as "day-to-day" since suffering a pelvic contusion on Tuesday. He was helped to the sidelines after crashing into Iran's goalkeeper, but later came back on the field. He was eventually substituted out at the half.

South Korea's Hwang Hee-chan scored in the 91st minute to give his team a shocking, come-from-behind 2-1 victory over Portugal and move them into the next round.

Portugal scored just five minutes into the match, but Korea's Kim Young-gwon tied it up in the 27th minute. Despite the loss, Portugal was already assured of making the knockout stage and they took the opportunity to sub out star Cristiano Ronaldo in the 65th minute.

Uruguay defeated Ghana 2-0 in the other game in the group, but South Korea finished tied with Uruguay at 4 points in the group. The teams were also tied on goal differential and tied head-to-head, so they went to total goals scored to give the edge to Korea.

Several players on Uruguay angrily shouted and gestured at the referees as they left the field, drawing post-match yellow cards. Uruguay missed a penalty kick earlier in the game and were angry about not getting another penalty later in the game. Portugal goes down as the winner of Group H with South Korea in second. That likely means a meeting with Brazil in the next game for South Korea. Dec 1, 5:16 PM Portugal, Brazil tune up for knockout stage in Friday action

Brazil and Portugal, two of the favorites to win the World Cup, are already into the knockout stage, but they'll have a chance to tune up for the second round in their final group matches on Friday.

In the other set of games Friday, Portugal faces off with South Korea and Uruguay faces Ghana. Portugal may rest its top players, including Cristiano Ronaldo, so South Korea will be looking to take advantage and grab an upset win. Tottenham star Son Heung-min and South Korea need to win and get a loss from Ghana, or, if that game ends in a draw, beat Ghana in goal differential.

Uruguay, sitting on 1 point just like Korea, needs a similar situation. They'll need to beat Ghana and get a loss from South Korea, or beat Korea out on goal differential if the Portugal-South Korea match ends in a draw. Here's the schedule for Friday, the final day of group play: Dec 1, 3:58 PM Japan stuns Spain to win group, Spain advances on goal differential

Japan stunned perennial contender Spain with two goals early in the second half to win 2-1 and take the top spot in Group E.

Japan won on goals by Ritsu Doan in the 48th minute and Ao Tanaka in the 51st minute. Tanaka's goal was initially disallowed due to being offside, but it was reviewed and then allowed.

Japan had made the round of 16 in alternating years the last six World Cups until this year, now going back to back in 2018 and 2022. Japan will play Croatia in the next round while Spain will play Morocco. Germany has now failed to get out of the group stage in two straight World Cups after winning in 2014 and finishing in the top 4 four tournaments in a row. Click here to read the rest of the blog.

knock out round 😳 you saying that the fans will start fighting 😱

The U.S. government has warned that the war in Ukraine has "raised geopolitical tensions in the Arctic"
MICHIGAN STATE・1 DAY AGO