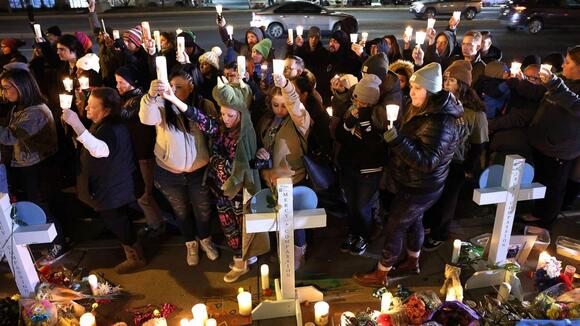 The 22-year-old who is suspected of gunning down multiple people at an LGBTQ nightclub in Colorado's second-largest city has been moved from the hospital to the local jail, police announced Tuesday.

The suspect, Anderson Lee Aldrich , who was allegedly beaten by people inside the bar after opening fire, is being held without bond on 10 "arrest only" charges: five counts of first-degree murder and five counts of committing a bias-motivated crime causing bodily injury, according to online court records. However, those charges "are only preliminary," according to Colorado's Fourth Judicial District Attorney Michael Allen, who serves El Paso and Teller counties.

"There have been reports that charges have been filed. That is not true," Allen said at a press conference Monday. "Any case like this, an arrest warrant will be written up that is supported by probable cause affidavit and that will be submitted to a judge for approval of the arrest of a suspect. That has occurred here in this case."

"Any charges associated with an arrest warrant are only preliminary charges," he added. "Very customary that final charges may be different than what's in the arrest affidavit. Typically, there will be more charges than what is listed in the arrest affidavit. So don't be surprised when you see a different list of charges when we finally file formal charges with the court."

Aldrich is expected to have their first court appearance on Wednesday at 11:30 a.m. local time, court records show. Allen told ABC News the appearance is to let Aldrich know the charges they're facing and advise them on the no bond status.

The appearance will be done via video link from jail, according to the district attorney.

"Within a few days of that first appearance is when we will return to the courtroom and file formal charges with the court," he added.

Aldrich allegedly began shooting a long gun as soon as they entered Club Q in Colorado Springs late Saturday night. At least five people were killed and 17 others were wounded by the gunshots, according to the Colorado Springs Police Department, which named the deceased victims as Daniel Aston, Kelly Loving, Ashley Paugh, Derrick Rump and Raymond Green Vance.

Police said "two heroes" -- identified as Thomas James and Richard Fierro -- confronted Aldrich and fought with them, stopping the suspect from shooting more people. Officers responded to the scene and detained Aldrich just after midnight, less than six minutes after the first 911 call came in, according to police. Aldrich sustained "significant" but non-life-threatening injuries, Allen told ABC News.

Fierro, who served in the military, said he grabbed the suspect's pistol from them and beat them. Fierro's daughter's boyfriend was among the five killed.

President Joe Biden spoke to Fierro to offer his condolences and thank "him for his bravery," White House press secretary Karine Jean-Pierre said at a briefing Tuesday.

MORE: What we know about the Colorado Springs mass shooting victims

The El Paso County district court has sealed the arrest warrant and supporting documentation connected with Aldrich's arrest. According to the motion by prosecutors, if the records were "released, it could jeopardize the ongoing case investigation."

In June 2021, Aldrich was arrested in an alleged bomb threat incident after their mother alerted authorities that they were "threatening to cause harm to her with a homemade bomb, multiple weapons, and ammunition," according to a press release posted online last year by the El Paso County Sheriff's Office. While no explosives were found in his possession, Aldrich was booked into the El Paso County Jail on two counts of felony menacing and three counts of first-degree kidnapping, according to the sheriff's office.

Aldrich's 2021 arrest may not have appeared on background checks because the case does not appear to have been adjudicated, officials briefed on the investigation told ABC News.

ABC News and other news organizations have petitioned the court in Colorado to unseal the records regarding Aldrich's 2021 arrest.

Allen told ABC News on Tuesday that after the suspect has their first court appearance, the DA will appeal to have Aldrich's sealed 2021 records opened next week.

Colorado's red flag law , which went into effect in 2020, allows relatives, household members and law enforcement to ask a judge to order the seizure of a gun owner's weapons if that owner is believed to be a risk to themself or others. It's unclear whether that law would have stopped the suspect from targeting Club Q, according to El Paso County Sheriff Bill Elder, who did not recall the circumstances surrounding Aldrich's 2021 arrest when asked by ABC News.

Club Q has been serving the Colorado Springs community for two decades and was considered a safe haven for LGBTQ people. The nightspot hosts a weekly drag show and live DJ on Saturday nights, according to its website.

"He's never spent money on a credit card or ID ever scanned in our business that we know of," Grzecka said in an interview on Sunday. "I think this was a community of target for him."

Colorado Springs Mayor John Suthers told ABC News that the suspect "had considerable ammo" and "was extremely well armed" when they allegedly walked into Club Q. While a motive remains under investigation, Suthers said "it has the trappings of a hate crime."

"But we're going to have to see what the investigation shows in terms of, you know, social media and things like that to make a clear determination exactly what the motive was," the mayor said in an interview on Monday.

Really cool that the ex service man stopped him and beat him with his own gun and put him in the hospital. The guy should get a medal

How sad is it that in this day and age people still behave in this manner. If you don’t like what someone is doing then don’t watch. Leave people alone and let them live their lives.

whether you like it or not there are gay people in the world there are transgender people in the world there are kids in school that have friends that have two mothers and two fathers. it doesn't matter whether you like it or approve of it it's part of reality. and when your children grow up and have to go out into the world and get a job, they might have a supervisor or a coworker that's gay, or transgender, or muslim, or something else that you don't particularly care for, and yet your children are going to have to go out into that Workforce and deal in the real world and work with these people so it's better they start learning inclusion and acceptance at a young age

Shanquella Robinson(MALAIKA JABALI/Essence) The case of Shanquella Robinson has taken the nation by storm. It has gotten to the point where the FBI and Mexican prosecutors have both opened their own separate investigations. Although their investigations are separate, the goal remains the same. They are looking to solve the very mysterious death of a woman who went on vacation for the last time.
15 DAYS AGO
Newsweek

Police have not yet named a suspect or made any arrests after four University of Idaho students were stabbed to death in an off-campus rental house last month.
19 HOURS AGO
The Independent

A former tenant of the home where four University of Idaho students were brutally stabbed to death has given insight into why two surviving roommates might have not heard the attack. Moscow Police’s announcement early in the investigation into the slayings of Xana Kernodle, Ethan Chapin, Kaylee Goncalves and Madison Mogen that two roommates had been in the home during the violent murders but were not “necessarily considered witnesses” raised questions about how they were seemingly able to sleep through it. The victims, whose bodies were found on the second and third floors of the residence at 1122 King...
2 DAYS AGO
The Independent

A woman posing as a reporter for a student newspaper attended a press conference by Moscow police in the Idaho quadruple murder case and asked questions to officers about the progress of the probe.On 13 November four University of Idaho students — Madison Mogen, Kaylee Goncalves, Xana Kerndole and Ethan Chapin — were stabbed to death at their off-campus home.A fortnight later, the police are yet to identify any suspects in the case.At a press conference conducted by the police on 23 November, a woman who identified herself as Destiny Martin with The Pathfinder, the student newspaper at Lewis-Clark...
2 DAYS AGO
Insider

'Y'all put me in this cage?': 82-year-old Alabama grandmother said she was told by police officers 'not to cry' after they arrested her for not paying her trash bill

"I was upset because I didn't know why they would come and arrest me," Martha Menefield said. "I'm just happy my grandkids weren't here to see that."
1 DAY AGO
Briana B.

Update: Woman Devastated After Discovering Husband of 14 Years Has Been Recording Her Daughter Showering

What would you do if you found out your husband of 14 years was secretly recording your 16-year-old daughter while she showered?. Update: Brintle let police listen in as she confronted her husband about the hidden camera in their home. According to police, Horacio Minero-Hernandez, 39, admitted to putting the camera in the shower, but he did not give a reason why. He only stated it was a mistake. He also stated that he never watched anyone take a shower because the camera never worked.
13 DAYS AGO
HuffPost

O’Connor, who was picked for the role in February, told the deputy about her position with the police department in Florida.
42 MINUTES AGO