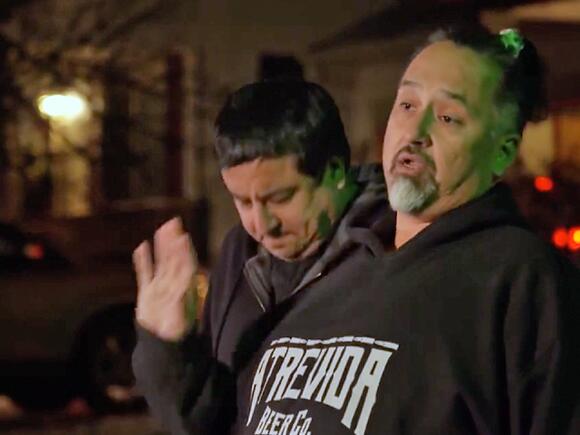 COLORADO SPRINGS— One of two men hailed by police as a hero for stopping the Club Q shooter opened up for the first time since late Saturday night’s shooting in Colorado Springs.

Richard Fierro and another man, identified by Colorado Springs Mayor John Suthers as Thomas James, subdued the 22-year-old suspect before they killed or harmed any more people. The suspect is in custody. They are currently at a hospital.

The shooting left five people dead and 19 people injured. Of the 19 hurt, 17 had at least one gunshot wound.

Fierro, a former Army major and an Iraqi war veteran, was celebrating a birthday with his wife, daughter and his daughter’s boyfriend, Raymond Green Vance, 22, when the suspect came into the club shooting.

“I don't know what the hell he was shooting at. I smelled the cordite (ammunition explosive). I saw the flash. I dove, pushed my buddy down. I fell back behind [bar seating],” Fierro explained.

He said moments later, there was a lull in the shooting and noticed the suspect was making his way toward the patio, where his wife had escaped to. That’s when he acted.

“I grabbed [the shooter] by the back of his little cheap ass armor thing and pulled him down,” Fierro said.

He said the suspect, while subdued, was going for their pistol. At that point, another man, presumably James, jumped in to help Fierro.

“I grabbed the pistol from him. and then I told the guy, ‘Move the AR!’ The kid in front of me, because he was at his head, I said, ‘Move the AR. Get the AR away from him.’ And the kid did it,” Fierro said. “Then I started whaling on this dude. And I'm on top of him. I'm a big dude, man, this guy was bigger. And I just kept whaling on him. And I told the kid in front of me, ‘Kick him in his head! Keep kicking him in his head!’”

The suspect was arrested on 10 counts , including first-degree murder and bias-motivated crime, according to court records. They have not been formally charged and are being held without bond. Authorities have not confirmed a motive for the shooting. He is currently at a hospital.

Fierro spoke during a press briefing in front of his Colorado Springs home Monday evening. His daughter, mourning the loss of her long-time boyfriend, was too distraught to talk. Vance was among the five victims who didn't make it out of Club Q Saturday night.

"Raymond was part of our family since my daughter was in high school. I went to his football games. I sat with his mom. I sat with his little brother. They are great people," he said.

Fierro came off as humble during the 30-minute press conference, reluctant to wear the "hero" label.

"I'm not a hero. I'm just some dude," he said. "Everybody find their heroes this Thanksgiving at the dinner table. You know, mom and dad or aunt and uncle or whoever you want."

Mayor Suthers said during a press conference Monday that he had the chance to talk with Fierro earlier in the day.

“I have never encountered a person who engaged in such heroic actions that was so humble about it,” Suthers said. “He simply said to me, ‘I was trying to protect my family.’”

Click here to read more about these victims and how their friends and family will remember them.

The suspect was arrested last year and accused of making bomb and weapons threats against his mother. However, criminal charges were not filed.

The 'Michelle's' sign that's been a landmark on Tejon Street in Colorado Springs for decades is missing. There is a $1000 reward for its return.
COLORADO SPRINGS, CO・6 DAYS AGO
KOAA News 5 Southern Colorado

In the weight loss industry January 17th is known as ditch your resolutions day, because by January 17th most of us have dropped off them.
COLORADO SPRINGS, CO・1 DAY AGO