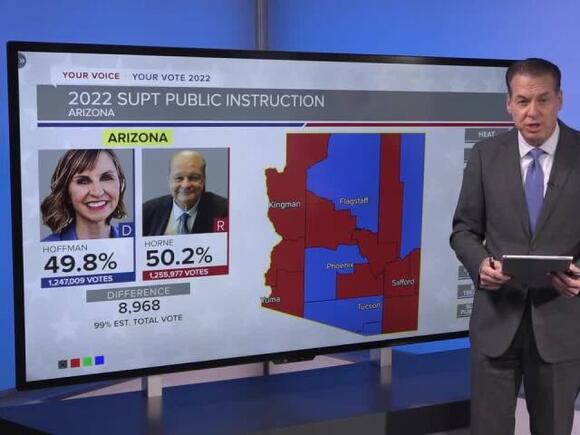 A familiar face is returning as Arizona School Superintendent. Voters returned Tom Horne to the job he held from 2003 to 2011. Horne says he’ll work to boost student achievement, and also fight teaching he sees as divisive.

11 years after he finished his term as State school superintendent. Tom Horne is back. Voters just chose him for a new four-year term. During his last go-round, he had a lot of conflict with TUSD last time around and there are signs that may happen again.

Horne says after serving as Arizona’s Attorney General, then being out of elected office he felt the need to run for Superintendent of Public Instruction again.

“You know, I've been reading a lot of the troubles in the schools through reduced test scores and the diversions under the things that detract from academics. And I could either sit at home and read about it and have smoke come out my ears or I could go out and do something about it, and that's what I decided to do.”

Tom Horne says he wants to raise student achievement and revive a test high school seniors would have to pass to graduate.

He also opposes what has been called Critical Race Theory, or CRT. It’s sometimes defined as teaching that the government made discrimination official through laws like segregation.

He says there are teachers in many Arizona districts, including TUSD, pledged to teach CRT though it may not carry that label.

He defines CRT as, “Causing resentment against other races, dividing kids by race, promoting what I call ethnic chauvinism. The important thing about any individual is what does that person know? What can they do? What is their character? What is their appreciation of beauty, not what race they were born into.”

In his previous time as school superintendent, Horne said he saw that sort of teaching in TUSD’s Mexican American Studies program. It caused outrage when he, and his successor as Arizona School Superintendent, forced the district to shut down the program.

Margaret Chaney is President of the Tucson Education Association, the union that represents TUSD teachers.

Horne is talking about sending improvement teams into schools to improve test scores. Cheney certainly supports raising scores but says improvement teams did not help and traumatized schools when Horne used them before.

She says scores declined because school budgets have left schools starved for resources.

She says if Horne convinces lawmakers to require passing a test for high school graduation, that will add to the strain on schools if students who passed their courses fail the graduation test and are held back.

——-
Craig Smith is a reporter for KGUN 9 . With more than 30 years of reporting in cities like Tampa, Houston and Austin, Craig has covered more than 40 Space Shuttle launches and covered historic hurricanes like Katrina, Ivan, Andrew and Hugo. Share your story ideas and important issues with Craig by emailing craig.smith@kgun9.com or by connecting on Facebook and Twitter .

"Colors of the Stone" Gem Show at Casino Del Sol

From Jan. 28 to Feb. 4 ”Colors of the Stone” will be joined with “To Bead True Blue” with over 500 hands-on artisan workshops and lots of shopping for the Tucson Gem Show.
TUCSON, AZ・23 HOURS AGO
KGUN 9 Tucson News

Republicans in Arizona’s Legislature voted along party lines to approve new rules that will allow state lawmakers to destroy emails after 90 days and delete text messages as quickly as they arrive.
ARIZONA STATE・15 HOURS AGO
KGUN 9 Tucson News

The Downtown Tucson Partnership says there are already 2 businesses that have opened downtown this year and there will be at least 12 more this year.
TUCSON, AZ・10 HOURS AGO
KGUN 9 Tucson News

Arizona executions on hold amid review ordered by governor

Arizona’s AG has put a hold on executions in the state until the completion of a review of death penalty protocols ordered by the new governor due to the state’s history of mismanaging executions.
ARIZONA STATE・4 DAYS AGO
KGUN 9 Tucson News

The point in time count helps give officials a snapshot of how many people are sleeping outside in one night.
TUCSON, AZ・2 DAYS AGO
KGUN 9 Tucson News

Arizona saw the largest increase in the number of homeless youth in the nation last year, at a time when other large states were seeing those numbers decline, according to a recent federal report.
ARIZONA STATE・5 DAYS AGO
KGUN 9 Tucson News

The program was formally known as Pima County Juvenile Court's Family Drug Court and it provides parents with support for long term sobriety and reunification with their children.
PIMA COUNTY, AZ・9 HOURS AGO
KGUN 9 Tucson News

On Wednesday, several conservation groups are suing the Federal Highway Administration in a court in Tucson. They argue that the proposed I-11 highway would disturb the environment.
TUCSON, AZ・3 DAYS AGO
KGUN 9 Tucson News

Chef Wendy Garcia of Tumerico and La Chaiteria is in the running for 'Best Chef in the Southwest' as a James Beard 2023 semifinalist.
TUCSON, AZ・2 DAYS AGO
KGUN 9 Tucson News

The Tucson Police Department is on the scene after a man got run over by a train. It occurred near South Houghton Road north of I-10 on Thursday evening.
TUCSON, AZ・1 DAY AGO
KGUN 9 Tucson News

The Navajo Nation has rescinded a mask mandate that's been in effect since the early days of the coronavirus pandemic.
ARIZONA STATE・4 DAYS AGO
KGUN 9 Tucson News

Lawmakers working to make unions an option for AZ employers

Arizona lawmakers are introducing a bill that is hoping to get rid of Arizona's right to work law, which cannot require employers to force employees to join a union.
ARIZONA STATE・7 DAYS AGO
KGUN 9 Tucson News

Two Tucson restaurants are seeing the spotlight in Yelp's 'Top 100 Places to Eat' list, taking the #8 and #26 spots.
TUCSON, AZ・2 DAYS AGO