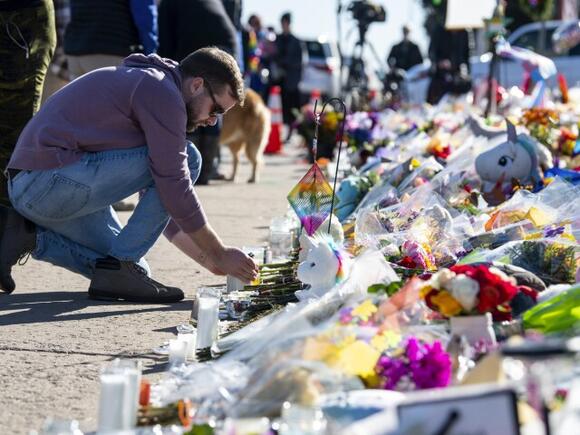 The shooting left five people dead and 19 people injured. Of the 19 hurt, 17 had at least one gunshot wound. One person was injured from something other than a gunshot wound and another victim did not have any visible injuries, according to the Colorado Springs Police Department (CSPD).

At the beginning of a press conference on Monday afternoon, Colorado Springs Police Chief Adrian Vasquez said he wanted to start off by naming the victims who were killed.

Click here to read more about these victims and how their friends and family will remember them.

"Too often, society loses track of the victims of these sad and tragic events in all the talk about the suspect," Vasquez said. "We strive to give the victims the dignity and respect that they deserve as well as shine the light of public attention on the victims."

He said he wants to ensure the survivors, family members of the victims, and the community as a whole knows that the police officers and detectives of CSPD will be diligent in their work to hold the suspect accountable.

Vasquez said he wanted to publicly thank the two heroes inside Club Q at the time of the shooting who intervened the suspect. While their actions are part of the investigation, he said with their permission, he wanted to acknowledge their bravery.

He identified them as Thomas James and Richard Fierro.

Listen to Richard Fierro speak about his events that night at Club Q and what he did to intervene in stopping the gunman from killing more.

Colorado Springs Mayor John Suthers said he had the chance to talk with Fierro earlier in the day.

"I have never encountered a person who engaged in such heroic actions that was so humble about it," Suthers said. "He simply said to me, 'I was trying to protect my family.'"

A lot of people are looking for a way to help, he said, adding that the Colorado Healing Fund (CHF) is one way to lend a hand. Click here to donate to the CHF, plus learn about other ways to donate to those in need.

In addition, the CSPD will hold a community resource expo at the University of Colorado in Colorado Springs to provide resources for the community. It will include mental health resources, spiritual support, emotional support, animal support, childcare, emergency financial resources, LGBTQ+ support, meals and other services, Suthers said. The expo, which will be held at the Kevin W. O'Neil Cybersecurity Education and Research Center located at 3650 N. Nevada Ave., is open until 7 p.m. Monday, and on Tuesday and Wednesday from 8 a.m. until 7 p.m. Learn more about this expo at ColoradoSprings.gov/ClubQ .

Multiple vigils are planned for Monday and beyond across Colorado Springs and Denver.

The suspect in this mass shooting, Anderson Lee Aldrich, 22, is in custody. They are currently at a hospital.

The suspect was arrested on 10 counts , including first-degree murder and bias-motivated crime, according to court records. He has not been formally charged and is being held without bond.

Once the suspect is released from the hospital, his first court appearance will be scheduled. That will be via video, said Michael J. Allen, district attorney of Colorado's 4th Judicial District. After this, the district attorney will file formal charges. As of now, there is only one suspect in this case.

Authorities have not confirmed a motive for the shooting.

“We don’t know the motives precisely at this point in time," Suthers said Monday morning. "We’re looking at social media, we’re looking at all those sorts of things. But it certainly has the trappings of a hate crime — there’s no question about it.”

The arrest affidavit for the suspect is sealed to protect the integrity of the investigation. This will be lifted in the coming days, according to DA Allen.

During the press conference on Monday afternoon, Lt. Pamela Castro, public information officer with CSPD, said the department expects the number of injured people to change, and is asking anybody who was hurt in this shooting and who has not spoken with police to reach out to them. The police department's non-emergency number is 719-444-7000.

Police and investigators worked in the area through the night.

On Sunday, CSPD Chief Vasquez said investigators found at least two firearms at the scene and that the suspect had used a long rifle in the shooting.

READ MORE : Club Q was known as a safe space for LGBTQ individuals before mass shooting

That morning, Club Q posted the following statement on its Facebook page: “Club Q is devastated by the senseless attack on our community. Our prayers and thoughts are with all the victims and their families and friends. We thank the quick reactions of heroic customers that subdued the gunman and ended this hate attack.”

By that evening, dozens of candles burned at a memorial outside the club.

Witnesses described Club Q as a safe space for them.

Justin Godwin, who was at the memorial, said he and his friend, Aeron Laney, had left Club Q about five minutes before.

"How do you walk in and see the environment that we saw and want to shoot people?" Godwin added.

Joshua Thurman, who was inside the club during the shooting, said he thought the gunshots were part of the music. Then he saw the suspect holding a long rifle and he sought shelter in a dressing room.

"As a Black kid it’s taboo to be gay, so coming here, this is one of the first places that I felt accepted to be who I am," said Joshua Thurman, who was inside the club during the shooting. "It’s supposed to be our safe place. A community shouldn’t have to go through something like this for us to come together. This is our home. This is our space. We come here to enjoy ourselves, and this happens?"

Matthew Haynes, the co-owner of Club Q, said he was in shock on Sunday evening. He learned about the shooting from an employee who called him after they had called police.

“This has been the biggest nightmare since Pulse in Orlando," Haynes said. "And this is — every time the phone rings and you’re not there, every time you heard a weird noise inside the bar — it’s what’s on your mind.”

The co-owner said he believed that “this was a community of target for (the suspect), but not specific people."

The case is being investigated as a potential hate crime, which would come with additional charges, DA Allen said, adding that it is as "serious a case as you can have in your jurisdiction."

"It’s really hard to say what needs to change to stop these things from happening in the future," Allen said. "That’s a discussion that needs to be had and it has to be an honest discussion. I think one thing that’s really important is we have to get away from the... divisive language that people use. There should be no reason why a person who wants to go to Club Q because of sexual orientation, that they feel like they are going to be unsafe or feel like they will be harassed or intimidated or attacked and shot. People should have freedom to enjoy their lives."

The five people who died in the shooting had loved ones, siblings, parents and possibly even children of their own, Allen said.

READ MORE : These are the victims of the Club Q shooting

"And their lives ended in the blink of an eye," he said. "Somebody’s got to stand up and give people a voice. And that’s what I love about this job is giving people a voice who can’t do it themselves."

The FBI is asking anyone with information about the shooting to call 1-800-CALL-FBI and to upload video by clicking here.

Even with several sub-zero mornings this season, meteorological winter for Southern Colorado hasn't been as cold as it could be.
COLORADO SPRINGS, CO・12 HOURS AGO
KOAA News 5 Southern Colorado

'Earn and Learn,' Innovative culinary apprenticeship launching in The Springs

“We need to revitalize, we need to get people back into the workforce." A new paid culinary apprenticeship program is starting in Colorado Springs
COLORADO SPRINGS, CO・9 HOURS AGO
KOAA News 5 Southern Colorado

Hikers and bikers in Colorado Springs need to be aware that a series of projects will be happening at Red Rock Open Space over the next eight months.
COLORADO SPRINGS, CO・4 DAYS AGO
KOAA News 5 Southern Colorado