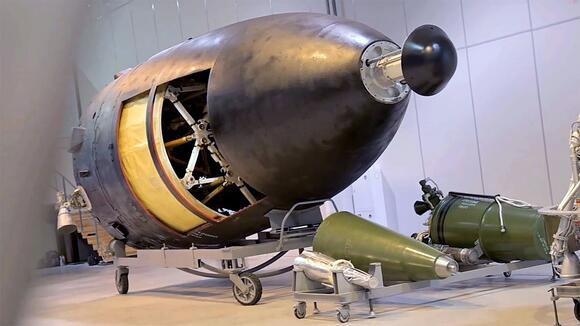 Russian state media outlets have offered unprecedented looks at the payload bus for the R-36M2 intercontinental ballistic missile, or ICBM, where the weapon’s nuclear warheads are housed. Also known as the SS-18 Mod 5 Satan in the West, this missile has a so-called multiple independently targetable reentry vehicle, or MIRV, configuration and has one of the heaviest payloads of any ICBM ever developed and fielded.

Dmitry Kornev, a Russian military expert who runs the blog Military Russia, recently posted stills showing the R-36M2 payload bus on Twitter that were captured from video clips broadcast on the state-run television stations Russia-24 and TV Zvezda . The latter of these is the official television station of the Russian Ministry of Defense. Kornev indicated that the footage has been shown after the first full-scale launch of the RS-28 Sarmat ICBM in April 2022. The RS-28 is expected to eventually replace the R-36M2 in Russian service.

The R-36M2 is a two-stage (not including the payload bus) liquid-fueled silo-launched ICBM the Soviet Union first started developing in the early 1980s as a more accurate and otherwise more capable successor to earlier R-36M variants. The original R-36M had begun replacing older R-36-series missiles in the 1970s. One of the biggest differences between the R-36M and the R-36, also known in the West as the SS-9 Scarp, was the change in the newer design to a cold launch system that uses a gas generator to eject the missile from the silo before its main rocket motors ignite.

The images that Kornev shared online immediately underscore just how big the R-36M2 is by showing the size of the payload bus by itself. The bus can carry up to 14 warheads, in two rows of 7. There is disagreement about the approximate yield of these warheads, with many sources saying they are in the 550-750 kiloton range, while some others suggest they could be more powerful, between 750 kilotons and one megaton.

Regardless, each of these missiles is typically loaded with 10 warheads, according to Kornev . The other four slots are instead filled with what are known as penetration aids, which are decoys and other devices intended to make it difficult for enemy forces to determine which of the incoming objects are real threats, track them, and potentially attempt to intercept them.

Some of the stills that Kornev shared on Twitter show what appear to be decoys, or at least mock-ups thereof, among other things in front of the bus.

The images also look to show four independent rocket motors at the rear of the bus, which would be used to position it in space before releasing its warheads and penetration aids over multiple targets along a set path.

The U.S. Air Force video below gives a good general look at how the payload bus on a typical MIRVed ICBM, loaded with a mixture of warheads and penetration, functions.

Lastly, the images of the R-36M2’s payload bus highlight a particularly curious feature at the tip of the nosecone. At first glance, this would appear to possibly be a drag-reducing aerospike similar in broad strokes to those used on the U.S. Navy’s Trident series of submarine-launched ballistic missiles. On those weapons, which have very blunt nose cones designed to provide greater internal volume without having to increase overall length, the aerospikes help reduce drag during launch.

However, Kornev says that this protrusion on the Russian missile is actually part of the system for removing the nose cone from the rest of the payload bus so the warheads and penetration aids can be released.

Why the Russians have decided to publicly show off these details about the R-36M2 is unclear. While these missiles are set to be replaced entirely, it’s not known exactly when their successor, the RS-28 Sarmat, which the West calls the SS-X-30 Satan 2, will actually begin to enter service. The original plan was for those new ICBMs to start being loaded into silos last year, something that obviously did not come to pass. There were delays in the development of the RS-28 even before Russia launched its all-out invasion of Ukraine in February, which has led to crippling international sanctions and other strains on the country’s defense industrial base. There have been reports that the Kremlin has scrapped its most recent long-term defense spending plans over the conflict.

The video below shows a more limited test of the RS-28 design prior to the full-scale test in April.

Whatever the case, we have now gotten an unusually good look at one of the most critical parts of the R-36M2, one of the largest in-service ICBMs in the world and that looks set to be a key component of Russia’s nuclear deterrent capabilities for years to come.

Another Russian fear tactic. Be afraid of us. We can nuke you. But we can’t wage a ground war because we have a very small military with not many modern weapons.

Seems such a primitive way of thinking, sad. Better to kill others than to live as one human race. There is no good reason for government to wage war on others or others to wage war on them.

It's all war games the only winner's are the Rich staying 🤑 and poor staying poor no more middle class . The loser's are the taxpayers

Igor Krasnov told Putin there were "more than 9,000 citizens who were illegally mobilized" when Russia sent conscripts into Ukraine late last year.
1 DAY AGO
The Drive

U.S. Army photoVeteran Abrams tankers paint a picture of the great attributes and challenges M1s will bring to the fight.
6 DAYS AGO
The Drive

Author's CollectionWith the Soviet empire only months away from collapse, its Navy conducted an unprecedented test of its submarine-launched doomsday weapons.
2 DAYS AGO
The Drive

"The girls from Ukraine and Switzerland simply ran from me like fire," Anna Linnikova told Evening Moscow.
LOUISIANA STATE・1 DAY AGO
The Drive

Ukrainian Air ForceOne of Russia's most modern missiles, and one that has ravaged Ukraine in recent months, came down relatively intact in Central Ukraine.
2 DAYS AGO
Newsweek

The U.S. government has warned that the war in Ukraine has "raised geopolitical tensions in the Arctic"
MICHIGAN STATE・19 HOURS AGO
Westland Daily

Chinese scientists have apparently shocked the globe by successfully creating the first human-monkey hybrid in a lab. This terrifying event took place in China in 2021 after a group of researchers from the United States and Spain journeyed there to circumvent laws prohibiting such study in their own countries.
1 DAY AGO
The Drive

Ukrainian Defense Intelligence directorate screencapUkraine captured Kherson City in November, but the two sides are fighting over nearby river islands, used by Russians to attack the city.
1 DAY AGO
The Drive

Ukraine Claims Poland In Talks To Transfer Its F-16s (Updated)

Polish Armed Forces/Piotr ŁysakowskiPoland says it's backing a collaborative effort to get F-16s into Ukrainian hands, but didn't specify if it could include its advanced F-16s.
2 DAYS AGO
Fox News

Social media is ablaze after news that Hellmann’s Mayonnaise is being withdrawn from South African grocery shop shelves, according to some analysts, because of the war in Ukraine.
23 HOURS AGO
The Drive

President Joe Biden awkwardly grabbed a reporter’s hand this week and squeezed under her umbrella after being asked about his recent decision to end two Covid-19 national emergencies, RadarOnline.com has learned.The somewhat bizarre incident took place on Tuesday afternoon as the 80-year-old president was departing the White House to visit New York City.While leaving the White House and approaching his helicopter, NBC News Chief White House Correspondent Kristen Welker questioned Biden about his Monday night decision to draw down two Covid-19 national emergencies by May 11.“What's behind your decision to end the Covid emergency?” she asked.But before answering Welker’s question,...
WASHINGTON STATE・23 HOURS AGO
The Drive

China's auto business is growing thanks to its surging EV sales from makers such as BYD and Tesla.
5 DAYS AGO
The Drive

Iran Claims It Has Come Under Drone Attack Following Explosions

Twitter ScreencapThe Iranian Ministry of Defense claims drones struck a facility in Isfahan as reports of blasts in other cities cause alarm.
4 DAYS AGO
The Drive

US ArmyConcerns over Ukraine's ability to fuel and maintain the Abrams' turbine engine have arisen, but other engine options have existed.
2 DAYS AGO
The Drive

Camp Blaz under construction on Guam. Image taken in September, 2022. PHOTO © 2023 PLANET LABS INC. ALL RIGHTS RESERVED. REPRINTED BY PERMISSIONCamp Blaz will be an epicenter of Marine Corps activity in the Pacific and will play a key role in a larger force realignment strategy.
6 DAYS AGO
The Drive

Ukraine Situation Report: M2 Bradleys Have Begun Their Voyage To The Battlefield

(U.S. Transportation Command photo by Oz Suguitan)The first shipment of more than 60 of 109 Bradley Fighting Vehicles promised to Ukraine has left a port in South Carolina.
2 DAYS AGO
The Drive

ANATOLII STEPANOV/AFP via Getty Images)Ukrainian forces inflicted heavy losses on Russian attackers in the latest clash for the frontline town in southern Donetsk Oblast.
4 DAYS AGO