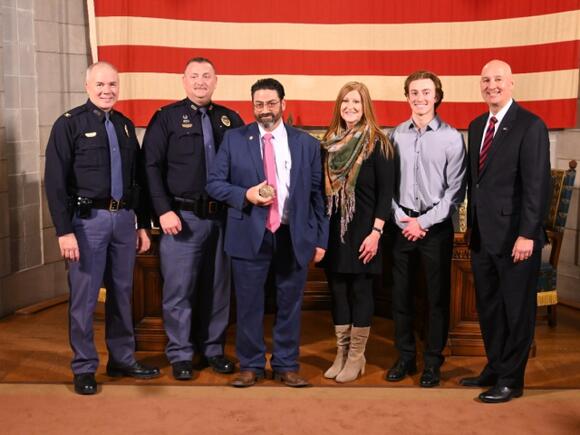 In a news release, the Nebraska governor's office announced that an Elkhorn man was honored on Monday as a recipient of the Carnegie Medal. He saved at least two people, including a 9-year-old, from a burning vehicle following an accident.

Read the news release from Gov. Pete Ricketts' office below:

“Frank’s initiative and courageous action helped save lives,” said Governor Pete Ricketts. “He’s a true Nebraska hero and well deserving of the Carnegie Medal. Stepping up to help a neighbor in need is something Nebraskans do every day. Frank’s bravery is a fantastic example of the spirit of Nebraskans.”

On September 25, 2020, Mr. Axiotes witnessed a three-vehicle crash while driving on I-80 in Lincoln. He immediately pulled over and ran to the crash scene to help as fire began to spread among the vehicles.

He pulled a 9-year-old Lucas Daly out of the back of a Chevrolet Trailblazer to safety. He then worked with another passerby to break a window to rescue the boy’s 21-year-old sister, Maddie Daly. Thanks to the bravery of Mr. Axiotes and fellow motorists who gave aid, four people were transported from the crash site to hospitals with only minor injuries.

“We are thrilled for Frank for receiving this honor,” said Colonel Bolduc. “His heroic actions made the difference in this case and they serve as inspiration for us all. We can all make a difference for others if we’re willing to act when others need help, just like Frank did for Maddie and Lucas.”

Over 10,000 individuals have received a Carnegie Medal since its inception in 1904. The award is given to civilians who risk extreme danger in an attempt to give life-saving assistance. To learn more about the award, click here .

One person was killed after a Wednesday afternoon crash that occurred near the area of 38th and Cuming Street.
OMAHA, NE・1 DAY AGO
KMTV 3 News Now

Traffic has slowed on I-80 westbound near 72nd street due to a crash. Motorists should be prepared for delays. Traffic backup visible on traffic cams.
OMAHA, NE・1 DAY AGO
KMTV 3 News Now

One person dead after Wednesday night crash in Saunders County

One person has died after a Wednesday night crash that occurred near Highway 79 south of County Road W.
SAUNDERS COUNTY, NE・1 DAY AGO
KMTV 3 News Now

Six people were taken to the hospital including four kids after a fire just north of 24th and Farnam on Wednesday.
OMAHA, NE・1 DAY AGO
KMTV 3 News Now

The Omaha Fire Department fought a large fire at a residence near 47th and L Street on Thursday night.
OMAHA, NE・18 HOURS AGO
KMTV 3 News Now

The Omaha Fire Department says a dog and a cat died in a house fire late Thursday night which was caused by excessive lint in a dryer vent tube.
OMAHA, NE・9 HOURS AGO
KMTV 3 News Now

Questions revived about whether Nebraska lawmaker lives in his district

Nebraska State Sen. Tom Brewer faced questions in 2014 and 2016 over whether he lived in the Sandhills district he aimed to serve.
NEBRASKA STATE・4 HOURS AGO
KMTV 3 News Now

Whether you like superheroes, movies, music, air and space travel or craft shows, Omaha and surrounding areas has you covered with local events happening this weekend.
OMAHA, NE・21 HOURS AGO
KMTV 3 News Now

The Douglas County Health Department on Thursday confirmed that 129 new cases of COVID-19 were reported to the department since our last report on Monday.
DOUGLAS COUNTY, NE・1 DAY AGO
KMTV 3 News Now

Omaha Police say two arrests have been made in connection with the robbery that occurred Thursday morning at First National Bank of Omaha on South 175th Street.
OMAHA, NE・1 DAY AGO
KMTV 3 News Now

Like any company, Omaha competes for employees. With unemployment so low, it's always competitive. Nebraska's unemployment rate in December was 2.6%,
OMAHA, NE・2 DAYS AGO
KMTV 3 News Now

A proposed revision to Nebraska’s “right to farm” law, promoted as increasing protections for farmers, is being condemned by environmentalists as a way to eliminate nearly all nuisance lawsuits.
NEBRASKA STATE・1 DAY AGO
KMTV 3 News Now

The Cohen Building has was a long-time retail spot in Council Bluffs and most recently was home to the EQ School of Hair Design, before it relocated. It since became SOHO Hair Academy.
COUNCIL BLUFFS, IA・1 DAY AGO
KMTV 3 News Now

“We have to care for one another, and I think that’s the biggest thing — I care.” Cpl. Walter Adams, the Douglas County recipient of the Dr. King award, strives to make a difference for all.
DOUGLAS COUNTY, NE・2 DAYS AGO
KMTV 3 News Now

The Washington County Sheriff's Office says the fire broke out around 4:30 a.m. Wednesday. No injuries have been reported and no word yet on a cause.
BLAIR, NE・2 DAYS AGO
KMTV 3 News Now

The groundbreaking for the newest Mutual of Omaha skyscraper has begun. When the skyscraper is finished, it will be a 44-story building and have 800,000 square feet.
OMAHA, NE・2 DAYS AGO
KMTV 3 News Now