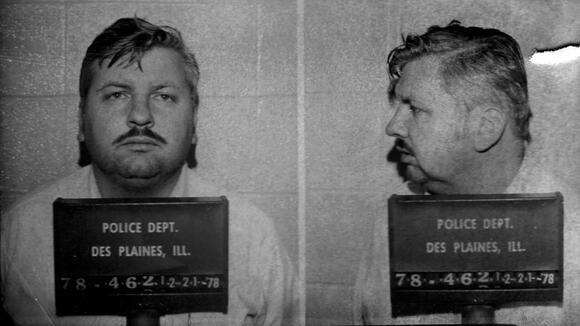 ( WBBM NEWSRADIO) – As the prosecutor who secured the death penalty for serial killer John Wayne Gacy, William J. Kunkle Jr. could have coasted on the celebrity of the case for the rest of his career.

Instead, he used the experience to travel the country and teach others about the trial and its legal peculiarities.

The Gacy trial was the first Illinois case to have a jury selected from outside of the district. Jurors were pooled from the Rockford area. Prosecutors were dealing with 11 unidentified bodies and were saddled with the burden of disproving Gacy’s insanity plea.

“I never regarded it as a slam-dunk,” Mr. Kunkle said in an interview with a Chicago Bar Association podcast in 2018. 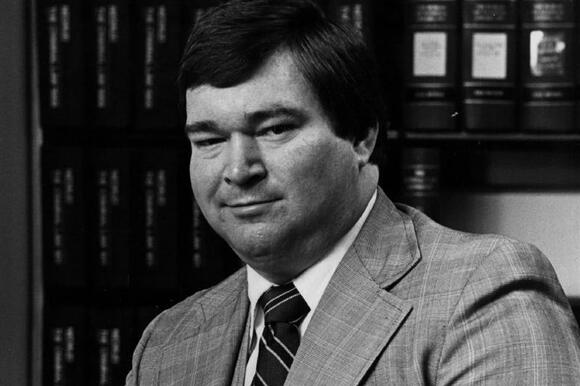 The case “was a tremendous education that allowed me to go all over the country lecturing to police officers, state’s attorneys, defense lawyers, whoever wanted to hear,” he said.

Family and friends remembered Mr. Kunkle as a stern yet empathetic man who, while a prime example of the “prosecutor everybody wanted to be like,” also lived a full life outside of work, corralling friends for yearly cross-country motorcycle trips and golf outings in Florida.

“People loved to hear him,” his daughter Susan Kunkle said. “He had a powerful presence. When he spoke people listened.”

Mr. Kunkle prosecuted several other high-profile cases. He was a special prosecutor of the “DuPage 7” — the seven law officers accused and later acquitted of cooking up evidence to convict Rolando Cruz in the 1983 kidnapping, rape and murder of 10-year-old Jeanine Nicarico in Naperville Township.

Mr. Kunkle left the state’s attorney’s office in 1985 for private practice. He was chairman of the Illinois Gaming Board from 1990 to 1993, then served as a Cook County judge until retiring in 2014.

Mr. Kunkle was the oldest of three brothers. He was born in 1941, in Lakewood, Ohio, and grew up in Fairview Park, a western suburb of Cleveland, his brother Bob Kunkle said.

He attended Northwestern University for his undergraduate degree, then worked for Union Carbide in South Carolina for a couple of years before returning to the university for his law degree, Bob Kunkle said.

Before becoming a prosecutor, Mr. Kunkle worked as an assistant public defender in Cook County for a year or two, colleagues said. Then he was hired as an assistant state’s attorney in 1973 under Bernard Carey, who later chose him to prosecute the Gacy case.

Mr. Kunkle recalled the pressure he felt about the Gacy case at the time: “The absolutely worst thing is to lose a case you’re supposed to win. To win this case you have to get the death penalty,” he said in the 2018 interview.

“He didn’t want Gacy to get any vibes from what he was doing,” he said. But after he secured the death penalty, he consented to see Gacy in prison.

“Bill goes back there and asks, ‘What do you want?’” Locallo recalled. “‘One day the truth will be out,’ Gacy says. Then Bill responds, ‘I have three weeks off.

Whatever you have to say I’ll listen.’ Then Gacy starts laughing. He said, ‘I thought so. I’ll see you at the execution.’”

Later in life, he enjoyed motorcycles and would often ride his Harley-Davidson, family said. “He looked like such a tough guy, but he was always so kind,” Bob Kunkle said. 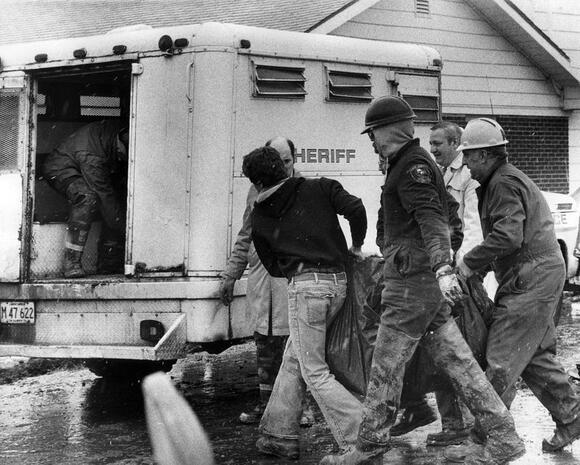 The 28th body was uncovered in John Wayne Gacy's back yard in the Norwood Park neighborhood of Chicago as officials transfer it to a sheriff's van on March 9, 1979. Photo credit (Photo by Sally Good/Chicago Tribune/TNS)

Thomas Breen, who represented Cruz in the DuPage 7 case, knew Mr. Kunkle since the early 1970s when they worked together in the state’s attorney’s office. Mr. Kunkle was Breen’s landlord for a time. They lived on separate floors of an apartment at 815 W. Wellington in Lake View.

Breen recalled the cross-country motorcycle trips Mr. Kunkle organized with colleagues and friends; the first he could recall was in 1978. The meticulously planned trips sometimes spanned 1,500 miles, with stops for camping at national parks.

Mr. Kunkle’s wife Sarah Florence Nesti Kunkle died in 2014. He is survived by two daughters and a grandson, C.J. Gilbert. Services have not been announced.

(Source: Sun-Times Media Wire & Chicago Sun-Times 2022. All Rights Reserved. This material may not be published, broadcast, rewritten, or redistributed.)

The man was also injured during the confrontation in the 8500 block of West Catherine Street, and both he and the intruder were listed in critical condition at Resurrection Hospital, according to police.
CHICAGO, IL・22 HOURS AGO
WBBM News Radio

Chicago Police Lieutenant Wilfredo Roman was acquitted of felony aggravated battery and official misconduct. He was accused of shoving a flashlight into the teen’s rear-end while arresting a teenager accused of carjacking.
CHICAGO, IL・10 HOURS AGO
WBBM News Radio

Body of 96-year-old woman found in Northwest Side freezer: CPD

Chicago police said a 96-year-old woman’s decomposed body was found in a garage behind a red brick two-flat, on 5529 W. Melrose in the Portage Park community. A death investigation is underway.
CHICAGO, IL・9 HOURS AGO
WBBM News Radio

Authorities say the Thin Mint thieves are still at large after taking about $450 in Girl Scout cookies as a truck was being unloaded on the Northwest Side on Saturday.
CHICAGO, IL・52 MINUTES AGO
WBBM News Radio

Crew committed 13 armed robberies on South Side in under 2 hours, CPD says

Chicago police said they believe the same crew is behind more than a dozen armed robberies that took place on the South Side in under two hours over the weekend. The robberies took place in Kenwood, Oakland, Bronzeville and Bridgeport.
CHICAGO, IL・1 DAY AGO
WBBM News Radio

Body of 96-year-old found in Portage Park freezer: 'She didn't deserve to go that way'

Chicago police said a 96-year-old woman’s decomposed body was found in a garage behind a red brick two-flat, on 5529 W. Melrose in the Portage Park community. A death investigation is underway.
CHICAGO, IL・9 HOURS AGO
WBBM News Radio

Federal jury awards $99,000 to CTA electrician who claimed harassment at work, including noose hung at a rail garage

A federal jury has ordered the CTA to pay $99,000 to a Black electrician who claimed he faced retaliation at work — including a noose hung at a rail garage — after he complained of racial discrimination.
CHICAGO, IL・5 HOURS AGO
WBBM News Radio

Couple marks 70th anniversary at Chicago hotel where they honeymooned

Seventy years, three children, six grandchildren and seven great-grandchildren later, they returned to the hotel where they honeymooned to celebrate their platinum anniversary.
CHICAGO, IL・1 HOUR AGO
WBBM News Radio

The former food service director in south suburban Harvey has been charged with stealing $1.5 million in chicken wings and other food from Harvey School District 152, according to the Cook County State’s Attorney’s Office.
HARVEY, IL・23 HOURS AGO
WBBM News Radio

Amid warnings that Chicago Fire Department paramedics are “taking a literal beating at the hands of their patients,” a City Council committee answered the alarm. The Public Safety Committee OK’d an ordinance criminalizing violence against paramedics.
CHICAGO, IL・1 DAY AGO
WBBM News Radio

CPD warn residents after numerous car thefts on West Side

Rocks thrown at Holy Trinity Orthodox Cathedral in Ukrainian Village have damaged some of the stained glass windows at the Louis Sullivan-designed church.
CHICAGO, IL・21 HOURS AGO
WBBM News Radio

Andy Robledo, along with members of his nonprofit Feeding People Through Plants, have been working to make winter a little easier for homeless people in Chicago by constructing orange, winterized tents and by delivering heaters, food, and blankets.
CHICAGO, IL・6 HOURS AGO
WBBM News Radio

Following weeks of hearings, an administrative judge is expected to decide in the spring whether a controversial metal recycling facility will get a permit after it was denied by the Lightfoot Administration.
CHICAGO, IL・4 HOURS AGO
WBBM News Radio

’Justified’ star Timothy Olyphant is talking in detail about the shooting that disrupted and temporarily shut down production of a sequel to the series as it was filming in Chicago’s Douglass Park last summer.
CHICAGO, IL・1 DAY AGO
WBBM News Radio

A reward is now being offered for information that leads to the Rockford man wanted for stealing a funeral home van with a body in the back and leaving both in separate places in Chicago.
CHICAGO, IL・3 DAYS AGO