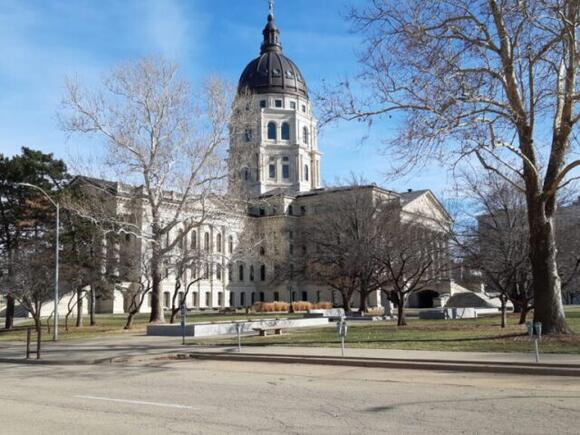 TOPEKA, Kan. (Kansas Reflector) — The Kansas Republican Party’s chairman said sanctions against party members were suspended due to appeals filed by people who were to be penalized for signing a petition leading to placement on November ballots of an independent candidate for governor.

Amid demands by the accused for due process, Kuckelman said the loyalty committee temporarily suspended disciplinary action so cases could be handled individually in the future.

The Kansas GOP leadership had voted Nov. 9 — one day after Schmidt’s loss — to chastise signers of the Pyle petition. The objective of the Republicans’ loyalty committee is to strip offenders of party leadership posts.

“In light of the number of appeals, the loyalty committee cannot properly hear and decide each appeal,” Kuckelman said. “It is not possible to assemble the executive committee to hear each appeal, and render a decision on each appeal in a timely manner, without risk of unfairly disrupting county reorganization meetings.”

Schmidt lost the Nov. 8 race to Democratic Gov. Laura Kelly, who secured 49% of the vote to Schmidt’s 47%. Pyle received 2% and the Libertarian Party nominee got 1%.

Kelly’s margin of victory was 20,886 votes, the Kansas secretary of state said. Pyle, who ran a conservative campaign that denounced Kelly and Schmidt, received 20,057 votes.

In 2007, the state Republican Party moved to form a loyalty committee after losing several prominent elections, including an attempt to block reelection of Democratic Gov. Kathleen Sebelius.

The concept was inspired by Kris Kobach, who was chairman of the Kansas GOP, and Christian Morgan, who was the state party’s executive director.

If the voters wanted D Schmidt all they needed to do was click on is name. I'm a Republican and I did not click on D Schmidt or Pyle. your loyalty should be to Kansas not each other.

We would like our politicians to make decisions based on what is best for the citizens, not the party platform.

why am I not surprised thst Kobach was one of the founding members of this group.

A surgeon who was once barred from practicing in Iowa due to allegations of professional incompetence, sexual harassment and unethical conduct has been issued a warning by the Iowa Board of Medicine.
IOWA STATE・2 DAYS AGO
KMTV 3 News Now

A revived legislative proposal would allow convicted defendants — including an Omaha man convicted for a 1999 killing — to file a motion for a retrial based on newly discovered evidence.
OMAHA, NE・3 DAYS AGO
KMTV 3 News Now

Pillen plan to shift valuation of ag land gets static, even from farm groups

Gov. Jim Pillen’s plan to relieve property taxes paid by farmers and ranchers got a rough reception Friday, even from some farm groups.
NEBRASKA STATE・1 DAY AGO
KMTV 3 News Now

A school choice bill that looks to trade scholarship donations for tax credits returns for another round in the Nebraska Unicameral.
NEBRASKA STATE・3 DAYS AGO
KMTV 3 News Now

The cannabis industry is getting ready for recreational cannabis sales to begin in Missouri on February 6.
MISSOURI STATE・4 DAYS AGO
KMTV 3 News Now

For years now classrooms and school board meetings have become the front lines of a clash between career educators and conservative parents.
NEBRASKA STATE・6 DAYS AGO
KMTV 3 News Now

The Pentagon says a Chinese balloon that is being used for surveillance has been flying about 60,000 feet above the Central U.S.
AUBURN, NE・3 DAYS AGO