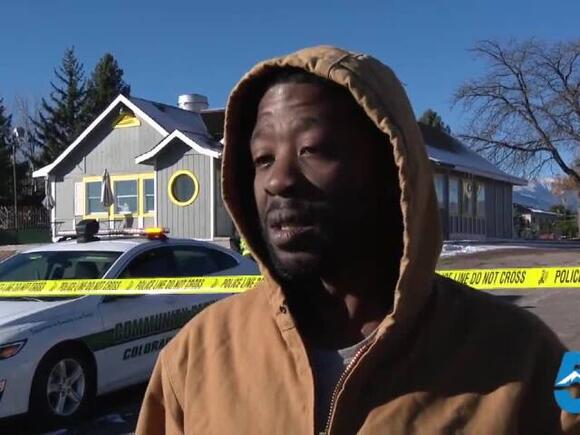 COLORADO SPRINGS, Colo. — What he thought was going to be an enjoyable night of dancing at Club Q nightclub in Colorado Springs turned into a nightmare when a gunman opened fire inside the LGBTQ club late Saturday night. 5 people were killed and 17 others were injured.

Joshua Thurman was inside the club dancing when he heard gunshots and saw the muzzle flash of a long rifle allegedly being fired by 22-year-old Anderson Lee Aldrich , who is in police custody.

“I thought it was the music, so I kept dancing. Then I heard another set of shots and then me and a customer ran to the dressing room, got on the ground and locked the doors, and called the police immediately,” Thurman said.

Thurman said there was no time to think. He was reacting on instinct. While inside the dark dressing room with both entrances locked, he heard more shots and people screaming. He said thoughts of surviving, family and friends were racing through his mind.

“I hope I make it out alive,” he said he told himself. “[I was thinking of] my mom, my friends, my loved ones.”

Thurman and the others who sought shelter from the mayhem inside the dressing room were unharmed as two “heroic” people fought with the shooter and were able to stop him from killing and hurting others.

A teary-eyed and shaken Thurman said he lost a friend in the shooting and a sense of community and safety has been shattered.

“As a Black kid it’s taboo to be gay, so coming here, this is one of the first places that I felt accepted to be who I am. It’s supposed to be our safe place. A community shouldn’t have to go through something like this for us to come together,” Thurman said. “This is our home. This is our space. We come here to enjoy ourselves, and this happens?”

Club Q is a gay and lesbian nightclub that features a “Drag Diva Drag Show” on Saturdays, according to its website. In addition to the drag show, Club Q's Facebook page said planned entertainment included a “punk and alternative show” preceding a birthday dance party, with a Sunday “all ages brunch.”

Vasquez said investigators found at least two firearms at the scene and that Aldrich used a long rifle in the shooting, though he did not specify the make or model. He said officers were working to obtain several search warrants but said the large and complex scene would be time-consuming to comb through.

According to the Denver FBI Field Office, several federal agencies are reviewing the evidence "to determine what federal response is warranted."

If you would like to help, the Colorado Healing Fund now has a designated donation portal for the 'Club Q Tragedy' .

The FBI and U.S. Attorney’s Office are working with local police, sheriff’s deputies, and the 4th Judicial District Attorney’s Office on the investigation. The suspect was treated for injuries after being taken into custody.

Thurman, who has been going to Club Q for more than a decade, said he feels lost after his “home” seems forever broken. He said the club is one of the only spots for the LGBTQ community in conservative-leaning Colorado Springs.

Investigators said they would treat the investigation as one potentially involving a hate crime but said early Sunday the motive for the shooting was not yet clear. Fourth Judicial District Attorney Michael Allen said the shooting appears to have been carried out by one person but investigators are still looking into whether anyone else was connected. Officials said they could not comment regarding any prior contact with Aldrich.

President Joe Biden said that while the motive for the shootings was not yet clear, “we know that the LGBTQI+ community has been subjected to horrific hate violence in recent years.”

MORE | 'We are devastated': Officials react to deadly mass shooting at Club Q in Colorado Springs

Colorado Gov. Jared Polis, who became the first openly gay man in the United States to be elected governor in 2018, called the shooting “sickening.”

The Associated Press contributed to this report

Even with several sub-zero mornings this season, meteorological winter for Southern Colorado hasn't been as cold as it could be.
COLORADO SPRINGS, CO・8 HOURS AGO
KOAA News 5 Southern Colorado

'Earn and Learn,' Innovative culinary apprenticeship launching in The Springs

“We need to revitalize, we need to get people back into the workforce." A new paid culinary apprenticeship program is starting in Colorado Springs
COLORADO SPRINGS, CO・5 HOURS AGO
KOAA News 5 Southern Colorado