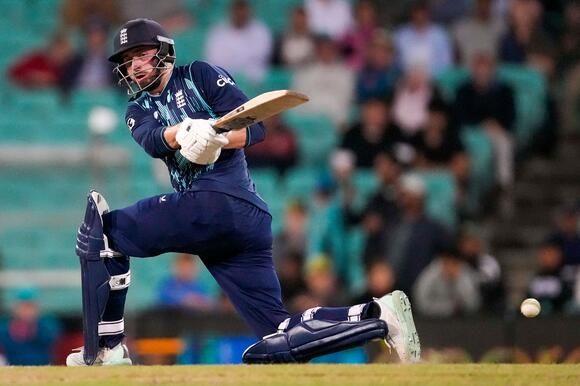 James Vince ruefully reflected on his dismissal as the turning point in England’s 72-run defeat against Australia, who moved into an unassailable 2-0 lead in the ODI series.

Chasing 281, England lost Jason Roy and Dawid Malan in the first over to a fired up Mitchell Starc while they fell to 34 for three before Vince and Sam Billings steadied the ship with a 122-run stand.

However, on a wearing surface which made life difficult for batters, Vince was given lbw after being struck on the back leg by Australia’s captain for the day Josh Hazlewood to depart for 60 off 72 balls.

Billings was bowled by Adam Zampa for 71 and England were unable to rebuild as they were all out for 208 in 38.5 overs, meaning Tuesday’s match at Melbourne will be a dead rubber.

“Losing those wickets early, we had to rebuild a bit, we got it going and then once I got out there was another flurry which killed the game off,” Vince said.

“I would have liked a bigger contribution to get us towards the target, same with Bilbo. If we could have kept that partnership going for longer, we would have given ourselves more of a chance of winning.

“The wicket was reasonably tricky. In patches it seemed to be quite hard and it wasn’t every ball but there was a bit of variable bounce and the ball sticking in the pitch.

“Luckily when I was going OK, Bilbo was perhaps struggling a bit more and then he started going better when I struggled a bit more. If we could have extended that partnership by another 50 runs or so and left the lads at the bottom a bit less to do, we might have got over the line but it wasn’t to be.”

England’s squad contains several players who were key to their T20 World Cup triumph while some of the group, such as Vince and Billings, have only been in Australia for the last week or so.

The new arrivals did not have a warm-up to adjust to conditions and Vince, who has registered fifty-plus scores in three of his last four ODIs, admitted the series has had an unusual feel to it.

“We’ve come in fairly fresh,” he said. “The guys that have been here a while are at the other end of the spectrum where they’re looking forward to getting home. We’ve not had a huge amount of preparation.

“Somewhere in the middle of where the guys have been here for a while and where we are would be ideal. But there’s been a lot of effort to try and do well in this series.

“Unfortunately we go to Melbourne having lost it. Fair play to the guys that have been here from the World Cup, they’ve focused on the game when it’s come round to it as well as they can.”

The timing and relevance of this series has been questioned and both sides were without their captains as Moeen Ali replaced Jos Buttler and Hazlewood led Australia in the absence of Pat Cummins.

“It was pretty exciting and a little bit nerve-wracking,” Hazlewood said. “It’s nice you got into a stride on the field it was good fun. I certainly enjoyed it.”

Leg-spinner Zampa finished with four for 45 but it was Starc who earned rave reviews, dismissing the out-of-form Roy before a sensational outswinger knocked back Malan’s off-stump.

“You know exactly what he’s going to do but reacting to it is something different,” Vince said. “You need a bit of luck against a ball like that, hopefully you get a thick outside edge or it just misses the stumps or something.”

Starc went on to finish with four for 47, castling Chris Woakes and also bowling David Willey via an inside edge, and came in for praise from Hazlewood.

“It was probably unexpected,” Hazlewood said. “There was no swing from really anyone else throughout the whole game. There were some beauties there.”

Cameron Norrie has paid tribute to a “fired up” Great Britain team after their victory in Colombia secured them a place in this year’s Davis Cup Finals.The world number 11 won a tense encounter against Nicolas Mejia in Bogota 6-4 6-4 on Saturday to hand Britain an unassailable 3-1 lead.His success came after Dan Evans and Neal Skupski defeated Sebastian Cabal and Robert Farah in the doubles earlier in the day to put the visitors ahead for the first time in the tie.🇬🇧🇬🇧🇬🇧🇬🇧🇬🇧🇬🇧@cam_norrie defeats Mejia 6-4 6-4 to seal Great Britain’s place in the Davis Cup Finals!#DavisCup | @the_LTA pic.twitter.com/raXMuheOUd—...
3 HOURS AGO
The Independent

Duhan van der Merwe ensured Steve Borthwick’s England reign was launched with an agonising defeat after the Scotland rugby wing crossed twice in a Calcutta Cup classic at Twickenham.Van der Merwe plundered his decisive second try in the 74th minute as Scotland came from behind to record a 29-23 victory in their Six Nations opener.The marauding Lions wing had already brought Twickenham to its feet with a stunning first-half score that began in his own half and saw five would-be tacklers beaten by his speed, strength and footwork.While a magnificent solo score, it exposed a failing in England’s defence that...
12 HOURS AGO
The Independent

Ali Carter edged his way into his third German Masters final in a tense semi as he defeated Robert Milkins 6-5 in Berlin.Trailing 3-1, 2013 champion Carter won four frames in succession to seemingly take control, but Milkins responded with two in a row – playing a brilliant shot to escape a snooker on his way to levelling the match at 5-5 – to send it to a decider.The tension continued in the deciding frame as neither player could get a significant break going.Carter had the edge in a battle of the safeties but there was still one moment of...
12 HOURS AGO
The Independent

France look to defend their Six Nations title and start their bid when they travel to Italy.It promises to be a massive year for Les Bleus, who will host the World Cup this year and are one of the favourites both then and now.Their fiercest competition comes in the shape of the No 1 ranked side in the world: Ireland.Their victory over Wales in the opener in Cardiff on Saturday, including a bonus point, makes the meeting in week two in Dublin a tantalising prospect.Here’s everything you need to know about the game in Rome.When is Italy vs France?The...
13 HOURS AGO
The Independent

Liverpool suffered a Molineux nightmare as Jurgen Klopp’s side were outclassed by Wolves.Joel Matip’s own goal, Craig Dawson’s debut strike and Ruben Neves’ effort sealed a stunning 3-0 win for the hosts as the shambolic Reds continued to sink.Liverpool are floundering in 10th after a third straight Premier League away defeat and – aside from a spell after the break – were embarrassed by fired-up Wolves.Next up they welcome a reinvigorated Everton before a trip to Newcastle serves as a stark reminder of the change in fortunes at Anfield and St James’ Park.With the Reds already out of title contention,...
14 HOURS AGO
The Independent

Ireland too good for Wales in Six Nations opener in Cardiff