What to expect from North Carolina’s new Supreme Court 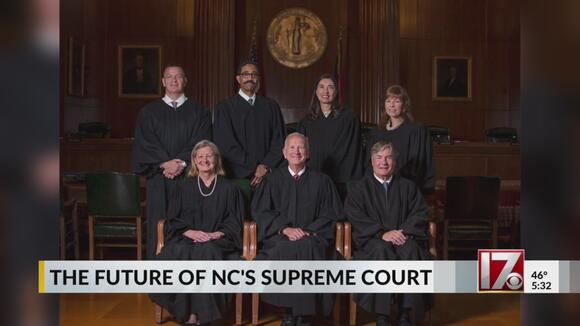 RALEIGH, N.C. (WNCN) — The 2022 midterm election has led to Democrats losing their bid to retain control of the North Carolina Supreme Court.

Wins at the ballot box for Richard Dietz and Trey Allen will now give Republicans the majority.

The initiative is part of Duke Law’s Wilson Center for Science and Justice and addresses extreme sentencing and racial disparities in North Carolina.

“I think defense attorneys will have to be very careful and very zealous about guarding their clients’ rights under the federal constitution and the state constitution because we may have a state supreme court that is less likely to protect those rights on their own,” said Finholt

In his dissent Chief Justice and Republican Paul Newby accused the democratic majority, who ruled on each case, of judicial activism. Newby said the majority interpreted the North Carolina constitution differently than the federal constitution. He also said the majority placed limits on juvenile sentencing beyond what the legislature has done.

Finholt is also waiting to see what the new makeup of the court means for minority offenders.

“I am hopeful that those disparate outcomes are something our new court does not ignore, but I think that’s an area of concern… is that a more ideologically conservative court will not be as interested in the downstream impacts on our communities,” he said.

While North Carolina’s Black population represents 22 percent of the state’s population, they also account for 50 percent of NC’s prison population.

How the high court rules may also have an effect on our prisons as the vacancy rate for corrections staff remains at 35 to 40 percent.

“You’ve got not enough people not making enough money taking care of too many people already and if that gets worse that could be a real problem for the state,” said Finholt.

Holly crap. This guy says that because we don't have enough guards to watch the criminals that this should drive if we should punish them at all? Or drive how severe a punishment should be for a given crime ("Well, it's normally a bad crime punishable by prison time, but there's not enough guards, so let's let him go free.")? ARRRRGGGG! Or posing the argument that if a particular bad action is now a crime at all worth punishing because there are less guards? These type of creepy people hurt law abiding citizens by not protecting us from these evil criminals. I despise these people. How does a person come to think that disgustingly warped way? It's GOT to be a mental disease. I consulted for the court/prison system for 5 yrs. There are a LOT of bad folks out there. To ignore this fact is to hurt society. Period.

This article is really just an ideological rant and ignores the fact that conservative does not mean ideological as liberal or progressive does. Look up the definition! A conservative court will NOT be activist. It will be conservative and will only “interpret” the law as written by an elected legislature. Let’s end dictatorial government by judicial fiat.

Another emu is on the loose in North Carolina.
HURDLE MILLS, NC・2 DAYS AGO
CBS 17

RALEIGH, N.C. (WNCN) — The U.S. Supreme Court will hear arguments Wednesday in a case that began in North Carolina but could impact elections across the country.  The case, Moore v. Harper, stems from the most recent battle over how the state legislature redrew electoral districts and looks at how much of a check state courts […]
NORTH CAROLINA STATE・1 DAY AGO
CBS 17

In a letter delivered to the governor’s office this week, the group called for the immediate release of those who are ill, elderly, in prison for technical violations of parole and those incarcerated as children.
NORTH CAROLINA STATE・6 DAYS AGO
CBS 17

RALEIGH, N.C. (WNCN) — A 75-year-old Gardner-Webb University housekeeper is looking to clean up after he spins the prize wheel in hopes of taking home $2 million. On Tuesday, Johnnie Bostic, of Polkville in Cleveland County, will spin the wheel after winning the chance from a $10 Bigger Spin scratchoff ticket, according to the N.C. Education […]
CLEVELAND COUNTY, NC・2 DAYS AGO
CBS 17

Nakia Gage Locklear, 18, Shawn Tobin Locklear Jr., 19, and a 16-year-old, all from Maxton, were arrested on Thursday and charged in the death of Joshua R. Hunt, 28, of Red Springs.
RED SPRINGS, NC・3 DAYS AGO
CBS 17

Over 100 lbs. of drugs seized, 3 arrested in NC mountains

Three men were arrested and over 100 pounds of drugs following an investigation in Buncombe County.
BUNCOMBE COUNTY, NC・4 DAYS AGO
CBS 17

A man has been arrested and charged in the murder of Destiny Wiggins and Devone Brown, police said.
ROCKY MOUNT, NC・4 DAYS AGO
CBS 17

The brawl happened on Friday, Dec. 2, inside the local school. As Statesville officers arrived at the scene, they helped student resource officers with separating those involved.
STATESVILLE, NC・3 DAYS AGO
CBS 17

Raeford police shot and killed a person who pulled a gun out and pointed it at them, according to Police Chief Marc Godwin
RAEFORD, NC・1 DAY AGO
CBS 17

RALEIGH, N.C. (WNCN) — Now this was an unforgettable day: One North Carolina woman delivered her baby daughter a few hours before she won a $100,000 Powerball prize. Lottery officials on Thursday identified Brenda Gomez Hernandez, of Concord, as the big winner of the Nov. 9 drawing. In an ironic twist, Hernandez used the birthdays […]
CONCORD, NC・6 DAYS AGO
CBS 17

‘That was not him’: Ex-wife of man killed during Rowan County house fire says he was suffering mentally

North Carolina Gov. Roy Cooper should not only be merry about Christmas, but merry about how voters continue to perceive him.
6 DAYS AGO
CBS 17

Williams initially won $50,000 by matching the numbers on the four white balls and Powerball. His fortune tripled thanks to the 3X Power Play multiplier hit.
GREENSBORO, NC・4 DAYS AGO