News8000.com provides you with the latest news, weather, sports, live events, and more for the greater La Crosse, Wisconsin area. 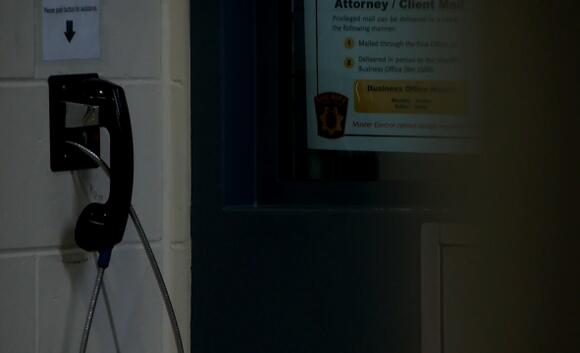 LA CROSSE (WKBT) — This week, the La Crosse County board unanimously voted to drop the cost of a phone call for anyone in jail from 21 cents a minute to free.

This means La Crosse County jail will soon be the first in Wisconsin to offer free phone calls for incarcerated people.

For many, this small cost can make a big difference.

Human connection matters wherever you are.

“I would make phone calls and nobody would answer because they didn’t have money to answer the phone calls. I would not talk to anybody on the outside. And it drives us crazy,” said Jessica Beck.

For incarcerated people, that connection is vital. From past experiences, Jessica Beck and Chloe Seelig know that well.

“When you go to jail, usually whatever life you had built in that time of addiction falls apart. You lose whatever house, items, things that you own. Whatever you have, you’re going to lost it at that point,” Seelig said.

The 21 cent per minute charge may seem small, but it can add up.

People in jail seek that phone time to connect with resources and loved ones.

“Most of the calls are collect, meaning that the costs are actually paid by the families and the loved ones of incarcerated people, as opposed to the incarcerated person themselves,” said Wanda Bertram, who works with the Prison Policy Initiative.

Bertram says high costs for calls are not uncommon.

“Actually, one in three families with an incarcerated loved one go into debt because of the cost of staying in touch with those people,” Bertram said.

Soon, at least in La Crosse County, that won’t be the case.

County Supervisors Dillon Mader and David Pierce worked with a committee to create a budget amendment.

“We both felt at that time that the practices were unjust, and that they were unfairly punishing people that are in many ways the most vulnerable people in La Crosse County,” Mader said.

On Monday, the county board voted unanimously in favor of those free calls.

Beck says she is grateful the county is taking this step to help people.

According to several studies , when incarcerated people stay connected with family, they are more likely to participate in programs and follow rules. This makes jails safer for staff.

It also reduces recidivism, or the likelihood someone will return to jail.

Pierce said giving incarcerated people the chance to communicate with family, and resources that can help them, are vital.

Mader agrees– noting that the cost of the amendment is a small price to pay for community support.

The La Crosse County board believes that picking up the cost to connect will pay off.

Access to free calls will begin in January 2023 and will be available for a year under the current budget.

Pierce and Mader said they both hope to reintroduce it next year, and eventually make the benefit permanent.

COPYRIGHT 2022 BY NEWS 8 NOW/NEWS 8000. ALL RIGHTS RESERVED. THIS MATERIAL MAY NOT BE PUBLISHED, BROADCAST, REWRITTEN OR REDISTRIBUTED.

this will only cause fights for the phones on the pods. they will be on the phones forever at least paying for the call limits the time on it. reduction of fees maybe but free calls is nuts. I'm sure the corrections officers and people that have to control this now are not happy about what these BOARD members have done.

So the "free" people of society have to pay their own phone bills or they get cut off. No wonder why people are crap today. It's easier to be crap than to be decent. Crappy people get free roof, free food, free education, now free phone rights 😂😂 Yup, pays to be bad. 😂😂I see jail/ prison as a protection program for criminals. Most are there because the real world is too much for them and they WANT to be there. It's safer. 😉

LA CROSSE, Wis. (WKBT) – It’s a new year, and a great time to pick up a new hobby to get outdoors. This weekend is Wisconsin’s Free Fishing Weekend. Everyone can pick up a pole and drop a line without having a fishing license. All fishing regulations are still in effect. This weekend gives people a chance to try something...
WISCONSIN STATE・6 DAYS AGO
News8000.com | WKBT News 8

According to the criminal complaint, the woman told police that Clark showed up uninvited at her home on Jan. 11 and wouldn't leave. He messaged the woman's family and told them that she'd been in a car accident and was hospitalized in Madison and that doctors wouldn't allow any visitors.
LA CROSSE, WI・7 DAYS AGO
News8000.com | WKBT News 8

LA CROSSE (WKBT) – You probably use salt to melt ice on slippery sidewalks, but there’s more to it. Using too much salt can age roadways and sidewalks as well as damage rivers, lakes and drinking water. To prevent that damage, the City of La Crosse is launching its Salt Smart initiative for Salt Awareness Week. They advise anyone who...
LA CROSSE, WI・5 DAYS AGO
News8000.com | WKBT News 8

LA CROSSE (WKBT) – La Crosse residents will get an opportunity to learn more about their neighbors. From Jan. 22 to Feb. 28, you can step into Hmong culture at the La Crosse Public Library. Hmong Diaspora: A Spotlight Collection had its grand opening on Jan. 22. The celebration featured performances by the Hmong Community and Cultural Agency’s Youth Hmong...
LA CROSSE, WI・5 DAYS AGO
News8000.com | WKBT News 8

Campbell Library to host “Island Ecology Series” for all ages

TOWN OF CAMPBELL (WKBT) – The La Crosse County Library is giving you a chance to learn all about the river starting Tuesday. At the Campbell Library, they are beginning their “Island Ecology Series” with the help of U.S. Geological Survey staff. A wildlife biologist will share how they monitor the health of the Mississippi by studying plants and by...
CAMPBELL, CA・5 DAYS AGO
News8000.com | WKBT News 8

Authorities claim James Dinsmoor -- who also goes by Brad, according to the complaint -- filmed and took photos of independent contractors whom he employed at Dinsmoor Strategies. The criminal complaint claims Dinsmoor secretly recorded photos and videos using a camera hidden in a decorative house set on the toilet tank.
ONALASKA, WI・7 DAYS AGO
News8000.com | WKBT News 8

ONALASKA, Wis. (WKBT) — The Onalaska Education foundation held its 14th annual “The Taste” event at Stoney Creek Saturday. Restaurants from throughout the region catered, and people tried their hand at casino games to help support Onalaska kids. This was the event’s first year back in person since the pandemic began. “Everything you do and everything that you purchase goes...
ONALASKA, WI・5 DAYS AGO
News8000.com | WKBT News 8

LA CROSSE (WKBT) – Engaged couples and their families got some extra help with wedding planning on Sunday at the 2023 La Crosse Wedding Expo. At the La Crosse Center downtown, brides-to-be and their families got plenty of help in the wedding planning process. According to one local wedding boutique, the Expo is a good place to go for inspiration...
LA CROSSE, WI・5 DAYS AGO
News8000.com | WKBT News 8

City of La Crosse to make Junglinster a sister city

Each program will be held at the FJ Robers Library on Lakeshore Drive in the Town of Campbell and focus on topics of interest specific to the Coulee Region.
LA CROSSE COUNTY, WI・8 DAYS AGO
News8000.com | WKBT News 8

In the address, delivered to the Common Council on January 12, the Mayor reflects on the city's progress in 2022 on a number of priorities he identified, including housing.
LA CROSSE, WI・8 DAYS AGO
News8000.com | WKBT News 8

ONALASKA, Wis. (WKBT) — Most of us can say that high school can be a pretty stressful time, but students at Onalaska High School may have lucked out. Meet Luke, the school’s official therapy dog. He’s been roaming the halls for the past two years and helping support students along the way. A school counselor says that amidst a national...
ONALASKA, WI・7 DAYS AGO
News8000.com | WKBT News 8

Community Conversation on Wednesday to focus on Ukrainian refugees

LA CROSSE, Wis. (WKBT) – On Wednesday, a Community Conversation will feature Ukrainian refugees. The La Crosse Interfaith Leaders Coalition is inviting everyone for a noon presentation at English Lutheran Church. The La Crosse Welcome Circle has been helping refugees get settled in the Coulee Region. People can meet their new neighbors and talk to them about their experiences. If...
LA CROSSE, WI・9 DAYS AGO
News8000.com | WKBT News 8

LA CROSSE (WKBT)- Students from the Polytechnic School hoped to spread awareness of the brutality of human trafficking with a community event Wednesday night. Students partnered with the Rivoli Theatre to show the 2014 film “SOLD,” based on real stories of human trafficking between India and Nepal. Before the movie organizers hosted a presentation and Q&A session with the local...
LA CROSSE, WI・8 DAYS AGO
News8000.com | WKBT News 8

“Ice does not discriminate”: Onalaska driving instructor shares how to stay safe on icy roads

ONALASKA, Wis. (WKBT) — With rainfall and Wednesday’s upcoming snowstorm, the roads could be slick. As an instructor at Enhanced Driving Institute in Onalaska, Travis Mayer has seen it all. “Ice does not discriminate. In a big truck, in a small car. If it is on ice, you are going to slide,” Mayer said. Mayer said it is best to...
ONALASKA, WI・9 DAYS AGO
News8000.com | WKBT News 8

LA CROSSE (WKBT) – Screenings for colorectal cancer are now being strongly encouraged. According to statistics released by the Mayo Clinic Health System, colorectal cancer is the third leading cause of cancer death in the U.S. Getting screened can help doctors identify cancer at an early age before symptoms develop, increasing a person’s chance to be cured. Mayo doctors say...
LA CROSSE, WI・5 DAYS AGO
News8000.com | WKBT News 8

News8000.com provides you with the latest news, weather, sports, live events, and more for the greater La Crosse, Wisconsin area.