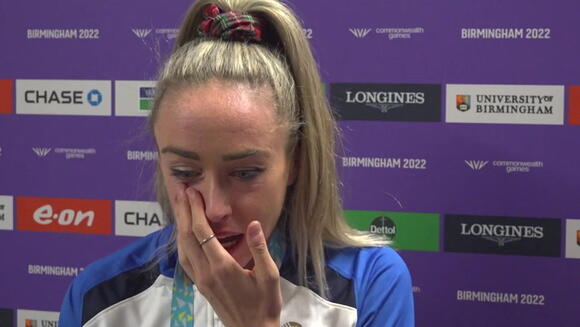 Eilish McColgan was named BT Sport ’s Action Woman of the Year on Wednesday, capping off a hugely successful year for the Scottish runner.

McColgan claimed gold in the 10,000 metres at this summer’s Commonwealth Games in Birmingham, putting in a Commonwealth record time of 30:48:60. In doing so, the 31-year-old not only won her first major title but also broke her mother’s record, which was set in 1991, just months after Eilish’s birth.

The Scot also won Commonwealth silver in the 5,000m, before claiming silver and bronze at the European Championships in Munich.

BT Sport’s Action Woman of the Year award is determined by fan votes, with McColgan having seen off competition from five other nominees.

Among the other nominees were footballer Beth Mead, who won the Golden Boot and was named Player of the Tournament as England won this summer’s Women’s Euros , and the recently retired Eve Muirhead, who guided Britain to curling gold at the Winter Olympics .

Meanwhile, the England Women’s football team were named Team of the Year, after the Lionesses claimed their first ever major trophy by winning the European Championship on home soil this summer.

Also at the award ceremony in London, former Grand Slam tennis champion Sue Barker CBE received a Lifetime Achievement Award for her contributions to the sport as well as broadcasting in Britain. Barker, 66, has led BBC coverage of Wimbledon, the Olympics and Winter Olympics, the Grand National and more over the last 30 years.

England head coach Steve Borthwick says his players are “desperate” to impress on the international stage, ahead of their Six Nations opener against Scotland.Speaking about Saturday’s fixture, Borthwick detailed the “excitement” his team will have in front of a packed-out Twickenham.“We’ve got players that have played international rugby and have then been out of it for some time, I think they’ve been wanting to get back in,” he said.“That’s the sense I’ve got - they’re desperate to go out and play well for England - desperate to get out there.”Click here to sign up for our newsletters.
48 MINUTES AGO
The Independent

Conor McGregor has offered to sponsor the rematch between Katie Taylor vs Amanda Serrano to ensure the fight takes place at Croke Park.Taylor edged out Serrano at New York City’s Madison Square Garden last April with the second fight destined for Ireland.But despite Taylor keen on the historic Croke Park, promoter Eddie Hearn maintains the 82,000-capacity stadium in Dublin is not an option due to spiralling costs, with the city’s 3Arena now more likely to host the event on 20 May.But McGregor is eager to step in and provide the funds to ensure Taylor’s homecoming can be staged...
58 MINUTES AGO
The Independent

Cameron Norrie ensured Great Britain were tied 1-1 going into the final day of their Davis Cup qualifier in Colombia, following Dan Evans’ earlier shock defeat.Norrie knocked over world number 510 Nicolas Barrientos 6-2 7-5 at the Pueblo Viejo Country Club in Cota, with the left hander sending down 10 aces and winning nine of his 10 service games over one hour and 21 minutes.The victory pulled Norrie’s team level at the end of a first day which started poorly when Evans was upset by 253rd-ranked Nicolas Mejia.What a win. What an atmosphere! 👏#DavisCup | @nicomejia00 | @fedecoltenis pic.twitter.com/J0Ke2UglsX— Davis...
9 HOURS AGO
The Independent

Hoggard and Bresnan withdraw as ECB racism process ‘has failed everybody’

Former England internationals Tim Bresnan and Matthew Hoggard have criticised the disciplinary process relating to the Azeem Rafiq racism investigation after withdrawing their co-operation.The case is due to be heard in public by a Cricket Discipline Commission panel at the start of next month.Both Bresnan and Hoggard face charges from the England and Wales Cricket Board but became the latest witnesses to pull out on Friday.Yorkshire County Cricket Club and a number of individuals have today been charged following an ECB investigation into racism and other allegations at the Club and its handling of those allegations.Read more ⬇️— England and...
2 HOURS AGO
The Independent

When Marco Silva started preparation for Fulham’s trip to Stamford Bridge, he found it difficult to plan for the potential XI, but felt confident there would be little change in Chelsea’s approach. It was the foundation of another positive result for his side, and another blank for Graham Potter.An uncharitable assessment of Silva’s view might be that’s because you should know exactly what to expect from the Chelsea boss. That is a solid tactical shape but few shots and no goals. This was after all the sixth time that Potter has overseen a scoreless performance in 15 Premier League...
1 HOUR AGO
The Independent

Former Sex Pistols frontman John Lydon and his band Public Image Ltd (PiL) have failed in their bid to represent Ireland at the Eurovision Song Contest.The post-punk group, formed in 1978, entered the song Hawaii, described as a “love letter” to Lydon’s wife of nearly 50 years, Nora, who has Alzheimer’s disease.But on a special Eurosong edition of RTE’s The Late Late Show on Friday night, a combination of votes from a national and international jury and public telephone votes selected the song We Are One by the band Wild Youth as the Irish entry for the contest.The winning song narrowly defeated Midnight...
HAWAII STATE・11 HOURS AGO
The Independent

Wales host Ireland at the Principality Stadium in Cardiff to kick off what promises to be an exciting Six Nations campaign.The Welsh, buoyed by the return of Warren Gatland after a dismal 2022, hope they can pick up form ahead of the World Cup this year.While the Irish enter this year’s tournament as the No 1 side in the world and eager to create yet more history as the favourites here and a serious contender in France come September.The atmosphere promises to be electric in the first of a sensational double header as England host Scotland in the tea...
2 HOURS AGO
The Independent

Chelsea remain a work in progress and the return on their lavish spree may take a while yet, but Enzo Fernandez offers immense promise and a start.Graham Potter might just cling onto that for now, as his grin at yet another shiny new toy gradually turned to a grimace as Fulham held the Blues in a goalless stalemate.Yet Fernandez, immediately flung into the line-up after Tuesday’s late night drama, represented an immediate upgrade as the Blues endure this frustrating transition.It has been a staggering rise for Fernandez, from Benfica’s speculative £8.8 million outlay last summer, a pivotal role in...
13 HOURS AGO
The Independent

Antonio Conte will be involved in team selection for Tottenham’s fixture with Manchester City and has been watching training back despite recovering from surgery on Wednesday.The Spurs boss is currently in Italy after he was forced to have his gallballder removed having been diagnosed with cholecystitis.Conte was on the touchline during Saturday’s 3-0 win at Preston, but was not his usual animated self and severe abdominal pain forced him to have surgery in his home country this week.Assistant Cristian Stellini admitted on Friday doctors will make the final decision on whether or not Conte can attend Sunday’s clash with Manchester...
12 HOURS AGO
The Independent

If the argument from Chelsea is that this is all a long-term investment, this game against Fulham certainly made it feel like it. Over £300m worth of January investment still offered up another 0-0 draw, that tested attention levels more than Financial Fair Play regulations. Enzo Fernandez, who came straight into the starting XI after his British record deadline day signing, admittedly looked tidy. But £106m warrants more than tidy.That is perhaps the most generous description of Graham Potter’s football right now. It is occasionally nice, and you can see a nascent idea taking shape, but it doesn’t exactly...
13 HOURS AGO