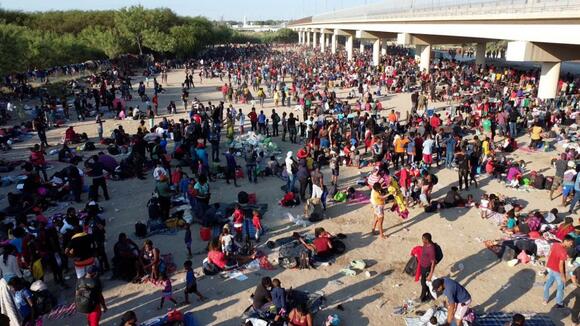 AUSTIN – Governor Greg Abbott today sent a letter to President Joe Biden highlighting the record-breaking level of illegal immigration at America’s southern border caused by the President’s sustained dereliction of duty enforcing the nation’s immigration laws. Prior to President Biden taking office, America had some of the lowest illegal-immigration totals seen in decades, however, over the past year-and-a-half that volume has skyrocketed to more than 2 million immigrants trying to enter the country illegally. The Governor notes that the federal government’s failure to execute America’s immigration laws has forced the State of Texas to protect its own territory against invasion by the Mexican drug cartels and mass illegal immigration.

“You must reinstate the policies that you eliminated, or craft and implement new policies, in order to fulfill your constitutional duty to enforce federal immigration laws and protect the States against invasion,” reads the letter. “Two years of inaction on your part now leave Texas with no choice but to escalate our efforts to secure our State. Your open-border policies, which have catalyzed an unprecedented crisis of illegal immigration, are the sole cause of Texas having to invoke our constitutional authority to defend ourselves.”

The Governor’s letter outlines America’s current immigration laws the President must enforce to satisfy the federal government's constitutional obligation to safeguard its citizens, including:

Earlier today, Governor Abbott also ordered the Texas Department of Public Safety (DPS) and Texas Military Department (TMD) to escalate their unprecedented efforts to secure the Texas-Mexico border. In a letter to DPS Director Steve McCraw and TMD Adjutant General Thomas Suelzer, the Governor outlined the need for the Operation Lone Star partners to defend Texas against what amounts to an invasion of America's southern border. Today’s letter follows a letter on Monday the Governor sent to Texas county judges explaining his Executive Order that invokes the Invasion Clauses of the U.S. and Texas Constitutions to fully authorize the unprecedented actions Texas is taking to secure the border amid an all-time record for illegal immigration.

Governor Abbott has taken unprecedented action to secure the border in the wake of the federal government’s inaction, including:

ship them to Biden's house, also to Harris,and Pelosi. They can support them. I'm tired of our tax dollars going to take care of illegals. It's not right!! Biden and his clan have a lot of money, so let them front their bills and support. Not the American people!

The Biden Administration's Culpability to Open Borders during a Deadly Pandemic is not only a "Threat to National Security" it's a "Violation of Oath of Office." Spreading Communicable Disease Statutes, "Terrorism and Terrorist Threats" At the Federal Level the Department of Justice (DOJ) formally announced that the Coronavirus appears to meet the statuary definition of a "Biological Agent" and the people who intentionally spread the Virus could be prosecuted for "Terrorism" also "Assault and Battery," "Child Endangerment," "Reckless Endangerment," "Aggravated Assault," "Reckless Behavior That Causes Bodily Harm," and "Harassment." Let's not forget "Treason" and "Crimes Against Humanity." All Impeachable Offenses!!!

He is right! I was told by one to move that this was her home now. Crazy illegals think they own Texas.

AUSTIN – Governor Greg Abbott announced the new position of Texas Border Czar to oversee border security in President Joe Biden's absence Tuesday at a press conference on a Texas border wall construction site in San Benito. Mike Banks has been hired as Special Advisor on Border Matters to the Governor and will serve as the State of Texas' first-ever Border Czar.
TEXAS STATE・2 DAYS AGO
San Angelo LIVE!

AUSTIN – Many Texas homes and businesses suffered ice damage this week. Although repairs to electrical transformers and some lines will be performed by power companies, some repairs may fall to homeowners and business owners because the damage is at their side of the powerline. Do not hire unlicensed electricians to perform this important repair.
TEXAS STATE・23 HOURS AGO