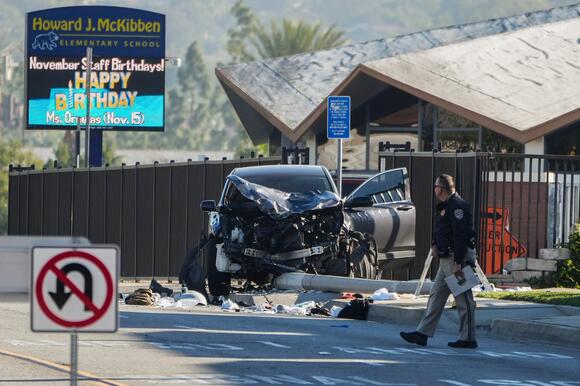 WHITTIER, Calif. — Five people were critically injured after a driver "going the wrong-way" in an SUV struck 25 Los Angeles County sheriff's and police recruits who were on a training run Wednesday morning, authorities said.

"They were running, doing their morning training exercise when this person ran into them," Los Angeles County Fire Department spokesperson Capt. Sheila Kelliher said at a news conference.

Los Angeles County Sheriff Alex Villanueva said in an update five people were in critical condition, one of which is on a ventilator. Four people suffered moderate injuries and 16 of the recruits had minor injuries. All injured recruits were taken to nearby hospitals. Some of the most severe injuries included head trauma, broken bones and loss of limbs, he added.

"We're just facing some life-altering injuries for some most severely injured recruits," Villanueva said. "This is this is very, very odd, to say the least. I don't think I've ever heard of this.

"It looked like an airplane wreck. There were so many bodies scattered everywhere in different states of injury that it was pretty traumatic for all individuals involved," he added.

The class had about 75 people, with recruits for the police departments of Bell, Glendale, Pasadena, El Segundo and UCLA, Villanueva added. Two of the injured recruits were from Bell, two from Glendale and one from Pasadena. The remaining injured were Los Angeles County Sheriff's recruits.

Deputies got help from a nearby county fire station, but also immediately transported some of the most badly injured directly to hospitals, possibly saving their lives, said county Fire Chief Anthony C. Marrone.

The driver, identified as a 22-year-old male from Diamond Bar, suffered minor injuries and was also taken to a local hospital. Authorities said the driver was detained "pending further investigation."

Jennifer Garcia Tarara, 49, a Whittier resident who lives near the scene of the accident, walked to the area after being notified by a friend. Hours after the crash, Tarara remained in disbelief.

"It’s really sad," Tarara told USA TODAY, adding that it was common to see recruits exercise along the road nearby Howard J. McKibben Elementary School where the crashed SUV ended up. "Recruits that were getting ready to put their lives on the line for us and something like this happens, it hits close to home."

Anthony Mendoza, who also lives nearby, told the Southern California News Group that the crash’s sound woke him up and that crashes are common on the road where the collusion occurred.

“It happens here a lot,” Mendoza told the news outlet. “During school, the speed limit is 25 miles per hour. But cars are going 60 to 80 miles per hour racing down the street. That’s the way it is. I don’t understand.”

DEVELOPING INTO THE EVENING: For an update later tonight, sign up for the Evening Briefing

Villanueva said the driver was not intoxicated based on the results of a field sobriety test, and the cause of the crash is unknown. The vehicle was in a southbound lane before crossing into a northbound lane, and some recruits told responding authorities they estimated the vehicle was going around 30 to 40 miles per hour.

Los Angeles County Sheriff's Department training bureau Capt. Pat MacDonald said two black and white radio cars were serving as safety vehicles for the group, and eight road guards wearing reflective vests were present. Villanueva said some people struck were in the back of the formation and had "no chance" to avoid injuries before the vehicle hit a light pole.

"Thank God for that light pole, because the vehicle ultimately hit it and stopped as opposed to possibly hitting more recruits," McDonald said.

"Our hearts are with the Los Angeles County Sheriff’s recruits injured this morning while training to serve their communities," California Gov. Gavin Newsom said in a statement . "Jennifer and I send our best wishes for their recovery and stand with their loved ones and colleagues at the Los Angeles County Sheriff’s Department during this difficult time."

OMG. that's awful. and anyone who thinks it's "awesome " needs psychological help. I hope and pray for a speedy recovery for the victims of this horrible incident. 🙏

Wow. Based on many of the comments here, there are alot of sick people! I doubt any of you would be making such sick comments if any that were hit were your children!

I hope that wasn’t done on purpose. Prayers for the victims.