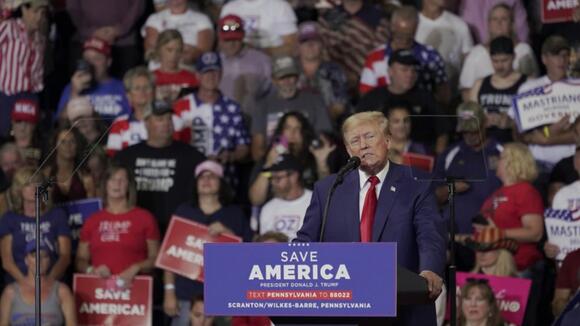 PALM BEACH, FL – Former President Donald Trump announced his run for President of the United States as the GOP Nominee Tuesday night in Florida, setting up a possible rematch with Joe Biden.

"In order to make America great and glorious again. I am tonight announcing my candidacy for president of the United States," Trump said Tuesday evening to a crowd of supporters.

Fox News is reporting Trump said, "I am running because I believe the world has not yet seen the true glory of what this nation can be. We have not reached that pinnacle, believe it or not," he continued, blaming President Biden for the current state of the nation. "In fact, we can go very far. We're going to have to go far first. We have to get out of this ditch. And once we're out, you'll see things that nobody imagined for any country. It's called the United States of America. And it's an incredible place."

Since his loss, Trump has challenged the legitimacy of the 2020 election results, repeatedly claiming the race was "rigged," due to the COVID pandemic-era process of mail-in ballots. Trump claimed the election was stolen, and his legal team filed a slew of lawsuits in battleground states across the nation.

Trump’s announcement comes one week after the 2022 midterm elections in which Republicans did not obtain an anticipated "red wave" of victories. Democrats kept control of the Senate and if Republicans are able to capture a majority in the House, it is expected to be slight. The former president was heavily involved in the midterms, throwing his support behind Republican candidates across the nation. During the primaries, the majority of Trump-endorsed candidates were victorious, becoming the GOP nominee in their races.

Trump first won the presidency in 2016 against former Secretary of State Hillary Clinton. If he is elected again, he would become only the second president to retake the White House after having been ousted, a feat achieved by Grover Cleveland in 1892 after he had lost the presidency to Benjamin Harrison in 1888. A victory would make Trump the 45th and the 47th president.

Former President Donald Trump appears to have lied in sworn court records, opening him up to severe sanctions by a New York judge who has already lost his patience and threatened to punish him before.Trump claimed he wasn’t the president of the Trump Organization during his four years at the White House, despite previously testifying that he was an “inactive president.” And he claimed that he didn’t have a financial stake in a partnership with the real estate company Vornado, even though he previously testified that he did.On Tuesday, the New York Attorney General’s Office asked Justice Arthur F. Engoron...
NEW YORK CITY, NY・2 DAYS AGO
Newsweek

On Saturday Haley tweeted: "It's time for a new generation to lead."
SOUTH CAROLINA STATE・1 DAY AGO
TheDailyBeast

MAGA-boosting radio host John Fredericks has turned on Donald Trump, telling the former president in no uncertain terms on Tuesday that “nobody cares” about his petty media feuds and “grievances” anymore.Fredericks, a longtime supporter of the twice-impeached ex-president, largely took issue with how Trump has seemingly ignored political issues while focusing his attention on far-fetched lawsuits and complaints about “fake news.” Additionally, Fredericks grumbled about Trump privately backing Ronna McDaniel in her successful re-election bid for Republican National Committee chair.“President Trump is going to do what he wants,” Fredericks declared in a clip first flagged by Raw Story. “I think...
2 DAYS AGO
Business Insider

Worried about World War III, Trump says he wants an 'impenetrable' shield like Iron Dome to protect the US from hypersonic weapons. A missile defense expert says it's a long shot.

Whether that's Iron Dome, something similar, or something else entirely, nothing is going to be "impenetrable," a missile defense expert said.
2 DAYS AGO
Insider

"The girls from Ukraine and Switzerland simply ran from me like fire," Anna Linnikova told Evening Moscow.
LOUISIANA STATE・2 DAYS AGO
HuffPost

The debate might've been even weirder than we thought.
12 HOURS AGO
RadarOnline

Democratic House Rep. Maxine Waters came under fire this week after it was revealed her daughter was paid more than $192k in campaign funds to run the congresswoman’s “slate mailer” operation, RadarOnline.com has learned.Waters’ daughter Karen reportedly earned $192,300 between January 2021 and December 2022 for running her mother’s operation that sees the 84-year-old California congresswoman endorse candidates and ballot measures via political advertisements that are then mailed en masse to residents throughout the state.According to Daily Mail, Waters also received payments for appearing on the slate mailers and her daughter has reportedly collected more than $1.2 million since the...
CALIFORNIA STATE・1 DAY AGO