Angelo State Earns First Round Bye in the Playoffs 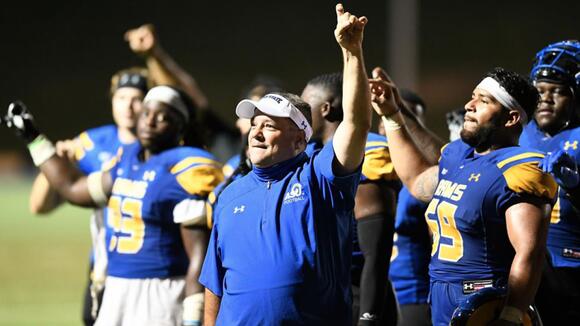 SAN ANGELO, TX — The Angelo State Rams (11-0) found out their postseason lineup at the NCAA Division II Football Selection show on Sunday, Nov. 13, at 4:30 p.m. CST. The Rams finished the season perfect and ranked no. 2 nationally.

The D-II football post-season tournament is broken down into four Super Regions. The NCAA DII football national committee provides three Super Regional rankings over the season's final three weeks, showing the top 10 teams from each region. 28 of those teams make the tournament, with each top seed earning a first-round bye. The tournament begins on Saturday, Nov. 19. The Division II championship game is slated for Dec. 17 at McKinney ISD Stadium in McKinney, Texas.

Angelo State is the no. 1 seed in Super Region 4 and will not play this weekend. The Rams will play the winner of the Bemidji State Beavers (9-3) and the Winona State Warriors (8-3). Angelo State will host its first playoff game in the second round of the tournament on Saturday, Nov. 26, in San Angelo. The time is still to be determined.

The Rams finished the season top-ranked in total defense and top five in several other categories on defense. Look for the Rams to continue to lean hard on their formidable defensive unit as they pursue a national title.

SAN ANGELO, TX — Winter storms wreaked havoc across the Concho Valley this week, and caused several high school basketball games to be rescheduled. Here are the dates and times of those matchups. SAN ANGELO CENTRAL VS MIDLAND LEGACY. The Bobcats and Lady Cats host the Legacy Rebels at...
SAN ANGELO, TX・2 DAYS AGO
San Angelo LIVE!

SAN ANGELO – Republic trash and recycle trucks will resume pickup routes Thursday. According to information from the city of San Angelo, trash service will not operate Wednesday, Feb. 1, and is planning for a late start Thursday, Feb. 2, due to inclement weather. Please place bins out for...
SAN ANGELO, TX・2 DAYS AGO
San Angelo LIVE!

SAN ANGELO, TX – The San Angelo Stock Show and Rodeo Association on Wednesday confirmed that the stock show will take place as scheduled despite the freezing weather. In a post on social media, on Jan. 31, 2023, the SASSRA confirmed that if junior exhibitors are having weather related travel issues to let them know as soon as possible.
SAN ANGELO, TX・2 DAYS AGO
San Angelo LIVE!

LIVE! Daily News |The Biggest Story of the Day

Today on LIVE!, we have an extended news segment so catch up on all our stories below!. The LIVE! Daily is the "newspaper to your email" for San Angelo. Each content-packed edition has weather, the popular Top of the Email opinion and rumor mill column, news around the state of Texas, news around west Texas, the latest news stories from San Angelo LIVE!, events, and the most recent obituaries. The bottom of the email contains the most recent rants and comments. The LIVE! daily is emailed 5 days per week. On Sundays, subscribers receive the West Texas Real Estate LIVE! email.
SAN ANGELO, TX・2 DAYS AGO
San Angelo LIVE!

SAN ANGELO, TX — On the February 2, 2023 LIVE! Daily news, a crosswalk sign melted in front of the historic Cactus Hotel but it didn’t burn the canvas awnings. Then we give you a break down on the best thing to do this Valentine's Day, and you will want to see our new segment, the Biggest Story of the Day all about the opening of the San Angelo Stock Show. Plus Tina Roland of the San Angelo Republican Women gets you pumped up about their upcoming meeting. All of this plus COVER1 hoops on the video above.
SAN ANGELO, TX・1 DAY AGO
San Angelo LIVE!

SAN ANGELO, TX — Overnight just after 12:30 a.m., the San Angelo Fire Department and police responded to a fire inside the homeless encampment located just west of N. Bryant Blvd. at 14th St. Over the radio, crews were notifying one another initially that it was a grass fire....
SAN ANGELO, TX・5 HOURS AGO
San Angelo LIVE!

SAN ANGELO – The San Angelo Police Department Thursday acknowledged five Police Offices who have earned Meritorious Service Awards for Extraordinary Acts of Bravery in 2022. The SAPD released the following information about the Officers and their heroic acts. On an annual basis, the SAPD encourages their employees to...
SAN ANGELO, TX・1 DAY AGO
San Angelo LIVE!

The Best Date Night in San Angelo This Valentine's Day

SAN ANGELO, TX – With Valentine's Day just around the corner San Angelo LIVE! has released an itinerary for the perfect date night for Feb. 14, 2023. To start the night you and your date will have a five course meal at one of San Angelo's most fine dining establishments, the Angry Cactus.
SAN ANGELO, TX・1 DAY AGO
San Angelo LIVE!

In a Facebook post by Masa they thanked everyone who has been with the them since the beginning. "Thank you for your love for Masa over the years and witness the growth of Masa. We treat customers as family members and friends, and hope that you can come to Masa happily and also go home happily," stated the post. "Your love is the greatest affirmation for us, and we hope that every customer can enjoy their time at masa."
SAN ANGELO, TX・2 DAYS AGO
San Angelo LIVE!

WALL – The Wall Volunteer Fire Department released photos of its emergency response vehicle which crashed on icy roads Wednesday morning responding to a crash on US-87 near Oxley Rd. As we reported Wednesday morning, the Wall 101 slid off the icy roadway and crashed near Roberts Rd. on...
WALL, TX・1 DAY AGO
San Angelo LIVE!

Driver Walks Away from High Speed Rollover on US 87

SAN ANGELO, TX — Traffic was diverted on US 87 north just after 10:30 p.m. Thursday night when a Ford F-150 pickup flipped after hitting the guardrail. The guardrail sustained substantial damage as did the truck. The speed limit along the stretch of the highway is 75 mph,. Grape...
SAN ANGELO, TX・5 HOURS AGO
San Angelo LIVE!

The suspect is Jaeshaun Brown, 20. He is a Black man, 5’7″ and 130 lbs, and has brown hair and brown eyes. He was last seen wearing black clothing. The suspect vehicle is a white 2020 Honda Accord with the license plate number PJB2582. Call the San Antonio...
SAN ANTONIO, TX・1 DAY AGO
San Angelo LIVE!

SAN ANGELO – Nine individuals were arrested and booked into the Tom Green County Detention Center over the last 24 hours on a variety of charges including Possession of the Devil's Lettuce, Resisting Arrest and Illegal Possession of a Firearm. 30-year-old Seth Amos was arrested by Sterling County Sheriff's...
SAN ANGELO, TX・1 DAY AGO
San Angelo LIVE!

SAN ANGELO – Five suspects were arrested and booked into the Tom Green County Detention Center over the last 24 hours on a variety of charges including Drug Dealing and Violent Assault. 29-year-old Ami Bornhorst was arrested early Wednesday by San Angelo Police for Possession and Delivery of Drug...
SAN ANGELO, TX・2 DAYS AGO