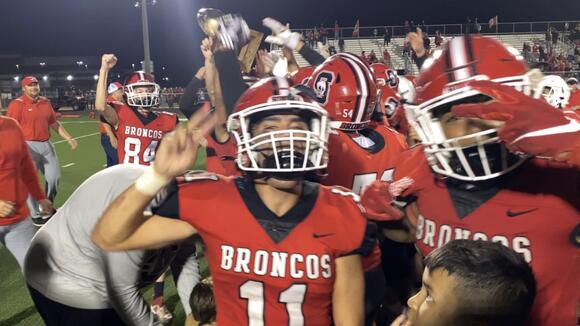 SAN ANGELO – Bi-District high school football has passed and the Area round of the Texas High School Footballl Playoffs are on the way!

The Concho Valley had a good week last week in the opening round of the playoffs as several team moved on to the second round.

The Hornets played the May Tigers in Robert Lee in an insane game that ended in an Irion County victory 104-91. Leakey was also involved in a close one against Leverett’s Chapel 39-35. The Hornets will take on the Eagles this Thursday, November 17, in Sonora at 6:00 p.m.

The Sterling City Eagles beat the Miles Bulldogs 43-42 at Clayton Weishuhn Field last week. This is the Eagles first year back in 11-man football after spending some time at the 6-man level. They’ll be playing the Windthorst Trojans this Thursday in Clyde, Texas at 7:00 p.m.

Windthorst senior quarterback Logan Cope has thrown for 2,068 yards, 23 touchdowns, and 11 interceptions. He’s also run for 698 yards and 10 touchdowns and sophomore Tyler Camacho has rushed for 445 yards four touchdowns. Senior back Clay Hoff has put up 328 yards and has crossed the endzone six times.

The Trojans have a few options out wide in junior receiver Brayden Berend who has put up 659 yards and nine touchdowns and behind him is junior Kolby Teakell with 492 yards and four scores.

Defensively, junior Drew Anderle leads the team in tackles with 109, Berend leads with 5.5 sacks, and Teakell has five of Windthorst’s 11 interceptions.

Wink shut out Cross Plains in the first week of the playoffs while Santo beat on Seymour 28-20.

Wink faces off against Santo in Colorado City and both teams have very good quarterbacks. Wink’s Kanon Gibson, a senior, has thrown 118-202 for 2,016 yards, 22 touchdowns and two interceptions. On the ground, Gibson ran for 723 yards and 16 touchdowns.

Santo junior signal caller, Huston Thornton, threw for 273 yards, four scores, and three interceptions in six games but ran for 710 yards and eight touchdowns. Behind him is seniors Jaime Sandoval and Kash Johnson who have 309 and 307 yards respectively.

Wink takes on Santo in Wolf Stadium in Colorado City.

Just up Interstate 20 in Sweetwater, the Brock Eagles will play the Muleshoe Mules at the Mustang Bowl. Brock started off the season 0-4 after quite the buzzsaw in the beginning the of the season. They started off against Pleasant Grove, Hirschi, Wimberley, and Gunter then turned around in district and went 6-0. The Eagles shut out the Iowa Park Hawks in the Bi-District round last week.

Muleshoe has had two players take snaps at quarterback in junior Sebastian Kirven and sophomore Nathan Martens who have thrown for 1,743 yards combined, 18 touchdowns, and 15 interceptions. Junior back Daniel Sianez has rushed for 1,133 yards and 10 touchdowns. Kirven is second on the team in rushing yards with 510 and eight scores.

Muleshoe is in a tough district with Shallowater and Bushland who both went 10-1 during the season.

The Sonora Broncos took on the Olney Cubs last week and won 28-27 after a big game from Jaime Buitron, Hunter O’Banon, and Edgar DeLuna. Sonora is squaring off against the Farwell Steers in Big Spring’s Memorial Stadium.

Olney did a good job limiting Buitron to only 94 passing yards, but he did throw two touchdowns. Sonora broke Olney by running the ball for 329 yards and two scores.

Like Olney, the Steers are in a tough district but have put up 402 points and only given up 158. The two teams they lost to during the season were both district team that finished above them in seeding in Stratford and Panhandle.

The Wall Hawks are back in action after Tornillo had to forfeit their playoff game. The Hawks will take on Childress Bobcats in Breckenridge’s Buckaroo Stadium.

Wall has played very good as of late and went perfect in district. Junior Nathan Pepper has rushed for 799 yards and 11 scores. Sophomores Gunner Dillard and Garrett Guy each have over 500 rushing yards. Senior Jayden Sellers and sophomore Luke Kemp have 590 yards combined.

The Bobcats finished district 4-1 having lost to Canadian in their opening week of district. Childress beat the Coahoma Bulldogs 46-20 last week.

The COVER1 Crew will work overtime so tune into COVER1 on Friday for exclusive coaches interviews, score updates, highlights, and more at 4:00, 8:00, and 10:00 p.m. only on San Angelo LIVE!

Today on LIVE!, the COVER1 Crew talks about the Super Bowl between the Kansas City Chiefs and the Philadelphia Eagles. The LIVE! Daily is the "newspaper to your email" for San Angelo. Each content-packed edition has weather, the popular Top of the Email opinion and rumor mill column, news around the state of Texas, news around west Texas, the latest news stories from San Angelo LIVE!, events, and the most recent obituaries. The bottom of the email contains the most recent rants and comments. The LIVE! daily is emailed 5 days per week. On Sundays, subscribers receive the West Texas Real Estate LIVE! email.
SAN ANGELO, TX・2 DAYS AGO
San Angelo LIVE!

SAN ANGELO — The Powerball has grown to the 9th largest jackpot in history. The estimated jackpot for the Powerball lottery is set at $747 million with a cash option of $403.1 million. The last Powerball drawing was on February 4, 2023, and the winning numbers were 2, 8, 15, 19, 58, with a Powerball of 10.
SAN ANGELO, TX・2 DAYS AGO
San Angelo LIVE!

URGENT: 9 Dogs to be Euthanized if Not Adopted in San Angelo

SAN ANGELO, TX – Nine shelter dogs in San Angelo's animal shelter will be put down later this week if they cannot find a home. According to the City of San Angelo, as of Tuesday, Feb. 7, the San Angelo Animal Shelter is at capacity. These nine dogs will be euthanized unless adopted, fostered or transferred to another rescue. If interested, please contact [email protected] as soon as possible.
SAN ANGELO, TX・1 DAY AGO
San Angelo LIVE!

The following are the full results of the 2023 San Angelo Stock Show and Rodeo Food Challenge:. The LIVE! Daily is the "newspaper to your email" for San Angelo. Each content-packed edition has weather, the popular Top of the Email opinion and rumor mill column, news around the state of Texas, news around west Texas, the latest news stories from San Angelo LIVE!, events, and the most recent obituaries. The bottom of the email contains the most recent rants and comments. The LIVE! daily is emailed 5 days per week. On Sundays, subscribers receive the West Texas Real Estate LIVE! email.
SAN ANGELO, TX・1 DAY AGO
San Angelo LIVE!

SAN ANGELO, TX — Tom Green County commissioners agreed to investigate the options where the county would hold a bond referendum to pay for an approximate $40 million upgrade to the existing San Angelo Coliseum. The remodel envisions expanding the seating of the coliseum built in 1959 from just under 5,000 seats to 10,000 seats (when floor seating is used), remodeling the rest rooms, adding a food court, and adding VIP boxes.
SAN ANGELO, TX・2 DAYS AGO
San Angelo LIVE!

SAN ANGELO — A San Angelo woman has been arrested for assaulting a police officer after getting into a fight with a boyfriend and eventually throat punching a cop. According to court documents, San Angelo police responded to the 200 block of Koberlin Street regarding a domestic disturbance call. Once on scene, officers learned that the dispute was between a woman and her boyfriend. Investigators were told at the time by police on scene that the boyfriend was being arrested for assault.
SAN ANGELO, TX・1 DAY AGO
San Angelo LIVE!

SAN ANGELO, TX – For about a month, across San Angelo, citizens are discussing the current homeless problem in San Angelo. During their meeting on Tuesday morning, the San Angelo City Council approved a proposal to open up a second warming shelter. During the meeting, on Feb. 7, 2023,...
SAN ANGELO, TX・1 DAY AGO
San Angelo LIVE!

Driver Killed in San Angelo was a Holocaust Survivor

"Bob Kahn fled Nazi Germany with his family in the late 1930s when he was 7, and they relocated as refugees in New York. Kahn’s father, Herman, who fought for Germany in World War I, was taken from the family home by Nazis one night in November 1938. It was a night Nazis referred to as Kristallnacht, or night of the broken glass, for the shattered windows in streets during the violent, anti-Jewish demonstrations in Germany, Austria and parts of Czechoslovakia, according to the United States Holocaust Memorial Museum," reported the local paper.
SAN ANGELO, TX・2 DAYS AGO
San Angelo LIVE!