Stimulus checks and other payments: IRS sending letters to millions as deadline looms 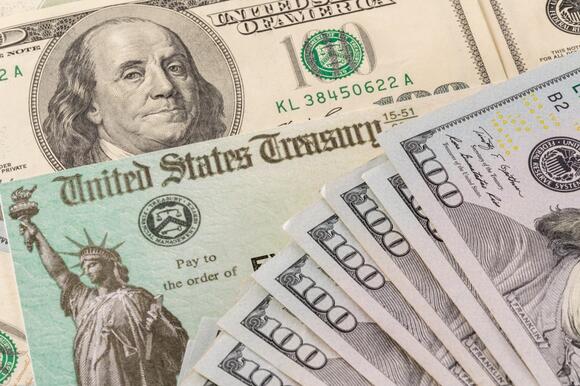 (NEXSTAR) – If you receive a letter from the Internal Revenue Service don’t panic, it could mean there is money waiting to be claimed.

The IRS announced in mid-October that it is trying to contact over 9 million people who are still owed stimulus payments, the Earned Income Tax Credit, or the Child Tax Credit.

“The IRS wants to remind potentially eligible people, especially families, that they may qualify for these valuable tax credits,” said IRS Commissioner Chuck Rettig. “We encourage people who haven’t filed a tax return yet for 2021 to review these options. Even if they aren’t required to file a tax return, they may still qualify for several important credits. We don’t want people to overlook these tax credits, and the letters will remind people of their potential eligibility and steps they can take.”

The IRS is keeping its free filing tool open for an extra month this year, extending the deadline to Nov. 17. You can also use ChildTaxCredit.gov to file a 2021 tax return and claim the credit – even if you don’t have children.

The easy file tool streamlines the process, especially for people who don’t usually file, but people who miss the November deadline can still file a 2021 tax return. Typically there is a three-year period for tax filers to claim credits they are eligible for, according to CNBC.

Why didn’t so many people initially get the IRS payments?

Many of those people didn’t initially get their payments because the IRS didn’t have their information on file from a recent tax return. People with very little or no income, for instance, aren’t required to pay taxes.

“Throughout the pandemic, IRS and Treasury struggled to get COVID-relief payments into the hands of some people — especially those with lower incomes, limited internet access, or experiencing homelessness,” the Government Accountability Office, an internal government watchdog, said.

What benefits are included?

Child Tax Credit: Families can claim this credit, even if they received monthly advance payments during the last half of 2021. The total credit can be as much as $3,600 per child.

Earned Income Tax Credit: The EITC helps low- to moderate-income workers and families get a tax break. The American Rescue Plan boosted the EITC, increasing the amount childless workers can receive to $1,502. The credit is $3,618 for workers with one child, $5,980 for those with two children and $6,728 for those with at least three children.

Recovery Rebate Credit: The third so-called stimulus check is $1,400 for each qualifying adult, plus $1,400 for each eligible child or adult dependent. For married couples, the qualifying income level is $150,000 or less, $75,000 or less for single taxpayers and $112,500 or less if filing as head of household. The credit is phased out above those thresholds.

The IRS recommends that people owed either of the three benefits file electronically to get the money as fast as possible.

this stimulus screwed the disabled and seniors but gave to families all because they had offspring. seniors and disabled have hard time paying for food since everything gone up 40%

Oh that's funny because I didn't see a damn thing already a month has pass and I should of seen something either in my account or mail box . All this talk about stimulus I'm pretty sure there's a lot of other people that has the same question when they're received their money . If it not gonna happen just say so instead of taking people for a loop !

Your Democratic vote gives illegal immigrants our tax money while veterans are living on the street in places..

8 tax deductions, credits you may qualify for in 2023

If you haven't filed your taxes yet, that means you still have time to take advantage of some commonly overlooked credits and deductions.
17 HOURS AGO
The Hill

When will I get my tax refund?

Tax season is officially open and those filers in line for a refund this year may be wondering when the money will land in their accounts.
1 DAY AGO
The Hill

The Biden administration will expand eligibility for an Inflation Reduction Act-enabled tax cut for electric vehicles, the Treasury Department announced Friday. The department has updated the classification standards used to determine eligibility, expanding the definition of an SUV. The $7,500 tax credit applies to SUVs costing up to $80,000, but there is no such benefit…
1 DAY AGO
The Hill

On The Money — 5 takeaways from a surprisingly strong jobs report

The U.S. economy surpasses Wall Street expectations with the recent jobs report. We’ll also look at some of the hurdles House Republicans face in trying to unify as the party works to hash out a cost-cutting budget strategy, the conference’s newest group targeting ESG investing, and more.  🎈 But first, why is everyone talking about a Chinese…
1 DAY AGO
The Hill

‘Woke capitalism’ is simply capitalism — and it’s good for business

The backlash against so-called “woke capitalism” is fundamentally anti-capitalist. Companies that prioritize positive environmental and social impacts in addition to profit are responding rationally to the market and to a business case that’s been proven over decades. It’s hypocritical and short-sighted for political leaders to coerce the market to align with their interests, rather than…
TEXAS STATE・1 DAY AGO