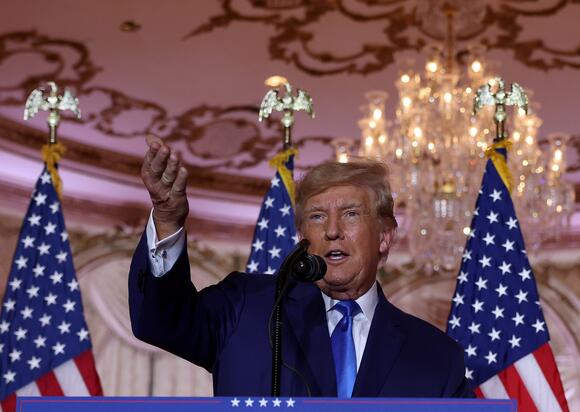 Several times in the past year, amid an array of legal troubles and scrutiny from the Congressional January 6th Committee in Washington, D.C., former President Donald Trump has hinted that he was mulling another run at the White House in the next Presidential election in 2024.

Now Trump has said a “big announcement” is coming next week.

While speaking at a campaign rally for Ohio senate hopeful J.D. Vance Monday, the final day before Election Day, Trump took a moment for a bit of self-promotion.

“I'm going to be making a very big announcement on Tuesday, Nov. 15 at Mar-a-Lago,” Trump told a partisan Republican crowd, who cheered in response. “We want nothing to detract from the importance of tomorrow.”

Trump had previously teased this particular teaser the night before in Miami at another campaign rally. “I will probably have to do it again but stay tuned,” he said then. “Stay tuned to tomorrow night in the great state of Ohio.”

Trump surprised many analysts with his 2016 Presidential win, but the support he enjoyed in that campaign waned in certain parts of the country, leading to his defeat in his bid for a second term in 2020 at the hands of current President Joe Biden.

But Biden has also seen his approval rating dip thanks to steep worldwide rises in inflation and worries about the American economy.

Biden’s perceived vulnerability is part of the backdrop behind what could be Trump’s announcement of a third Presidential campaign next week, a decision he has heavily hinted at several times in the past year, even as he continues to perpetuate his false claims of a stolen 2020 election that led to the January 6th riots in the nation’s capital.

Trump’s most recent hint saw him state that he would “very, very, very probably” run again, but some reports have stated that Republican higher-ups urged Trump to hold off on his announcement until after the mid-term elections, so as not to steal the spotlight from the GOP candidates looking to win their way to public office and potentially flip Congress in favor of the Republican party.

Please run Trump so the RNC can stop paying your legal fees and the bonus of you having to answer questions about Jan 6th, your fraudulent actions concerning your businesses and lastly why you STOLE top secret documents and lied about them. Good times ahead!😁

Donald Trump issued a potentially revealing statement on Truth Social as news broke Tuesday that authorities in Fulton County, Georgia, are nearing a decision on charges for multiple members of his inner circle — including potentially Mr Trump himself.The ex-president, out of nowhere, brought up his now-infamous 2 January 2021 call to Georgia Secretary of State Brad Raffensperger in which he instructed the state elections chief to “find” more than 11,000 votes he would have needed to surpass Joe Biden’s total in the state.“My phone call to the Secretary of State of Georgia, and a second call which the...
FULTON COUNTY, GA・2 DAYS AGO
Benzinga

Sen. Ted Cruz (R-Texas) shared his views on why it was difficult for members of the Republican Party to have an opposing view with former U.S. President Donald Trump in an interview at the 2022 Texas Tribune Festival, held in September. What Happened: Trump is a "unique" character, according to...
TEXAS STATE・1 DAY AGO
The Comeback

Former president Donald Trump claimed victory in the seniors’ golf championship at his property in West Palm Beach, Florida, over the weekend. “A great honor,” Trump wrote on Truth Social on Sunday. “Competed against many fine golfers, and was hitting the ball long and straight. The reason that I announce this on fabulous TRUTH is Read more... The post Donald Trump pulls absolutely insane move at golf tournament appeared first on The Comeback: Today’s Top Sports Stories & Reactions.
WEST PALM BEACH, FL・2 DAYS AGO
Salon

Arizona television personality Kari Lake's first foray into politics failed in a spectacular manner, in large part because she alienated a substantial segment of voters in her own party who either flipped to her opponent or chose to skip voting for anyone for governor. That's according to a post-election analysis...
MARICOPA COUNTY, AZ・2 DAYS AGO
Fox News

McCarthy gets heated with reporter: 'You don't get to determine whether I answer a question'

Speaker of the House Kevin McCarthy on Tuesday defended his decision to strip Democratic Congressmen Adam Schiff and Eric Swalwell from the House Intelligence committee.
WASHINGTON STATE・1 DAY AGO
Newsweek

Greene's ascent within the GOP may be a stepping stone to bigger aspirations in the years to come.
GEORGIA STATE・14 HOURS AGO
Newsweek

The hammer assault has led to unfounded conspiracy theories about former Speaker Nancy Pelosi's husband, and any footage may in time be manipulated.
WASHINGTON, CA・22 HOURS AGO
97.1 FM Talk

When news broke that Joe Biden was in possession of classified documents from his time as Vice President, comparisons between his scandal and the FBI raid of Mar-a-Lago have been dominating the conversation.
8 DAYS AGO
The Week

Special Counsel John Durham's long investigation of the FBI's probe of Russia's ties to former President Donald Trump's 2016 campaign never proved former Attorney General Bill Barr's theories that the investigation had started with anti-Trump skulduggery by the CIA and allied intelligence services, or through a conspiracy from Hillary Clinton's presidential campaign. But it wasn't for lack of trying, The New York Times detailed Thursday, after a monthlong review of the Durham investigation.  Durham, appointed by Barr, is writing his final report after going 0 for 2 in courtroom prosecutions.  The Times report answered some of the lingering questions from Durham's politically charged...
49 MINUTES AGO
97.1 FM Talk

Missouri Secretary of State Jay Ashcroft discusses ESG (Environmental, Social, and Governance), a values-based framework established to measure the degree to which an organization is operating in a “sustainable” manner.
MISSOURI STATE・8 DAYS AGO
97.1 FM Talk

Griff Jenkins of Fox News reports live from Eagle Pass, TX standing on the banks of the river with US Customs and Border Protection agents and the Army National Guard as migrant families actively enter the water to cross into the country.
EAGLE PASS, TX・14 DAYS AGO
97.1 FM Talk

What is the Biden Administration's goal with illegal immigration?

December U.S. Customs and Border Patrol encounters surged to a record-setting 251,000. What, if anything, is the Biden Administration doing to stem the tide?
2 DAYS AGO