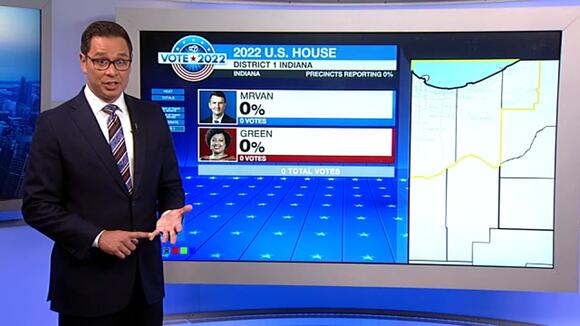 Democrat Frank Mrvan won reelection to his northwestern Indiana congressional seat on Tuesday, surviving an expensive campaign in which Republicans made their first serious challenge in decades for the longtime Democratic stronghold.

National Republicans had targeted first-term incumbent Mrvan for defeat as part of their push toward regaining a majority in the closely divided U.S. House, throwing their support behind Jennifer-Ruth Green, a Black U.S. Air Force veteran. Meanwhile, Republicans won election for two open U.S. House seats from heavily GOP Indiana districts. Note: The video in the player above is from a previous report. Democrats have typically won the 1st District, which hugs Indiana's Lake Michigan shoreline near Chicago, by large margins, but former President Donald Trump closed the gap by appealing to working class voters in the district that has some of the country's largest steel mills. Mrvan easily won election in 2020 over a perennial Republican candidate with the endorsement of retiring 18-term Democratic Rep. Pete Visclosky and strong labor union support. Mrvan faced a tougher time this year as outside political groups linked to both parties each poured millions of dollars into TV ads in the district. SEE ALSO | Republican Sen. Young wins 2nd term in holding Indiana seat Mrvan spoke to supporters Tuesday night at a union hall in Merrillville, crediting labor union members for his victory, The (Northwest Indiana) Times reported. "I want to thank you for your commitment, the doors that you knocked, the phone calls you made, talking to members, talking to working men and women to understand what was at stake," Mrvan said. Green, who would have become the GOP's only Black female House member if she had won, touted herself as a Trump supporter during the Republican primary campaign but had backed away from talking about him in recent months. Utah's Mia Love became the first Black Republican woman in Congress with her 2014 victory. She lost her reelection bid in 2018. Green said in a concession statement that the closeness of the race meant that Mrvan "is on notice" that Republicans will continue contesting for the seat. "Nothing worth doing is ever easy and changing a district that has voted one way for nearly a century doesn't happen overnight," Green said. "This is just the beginning, not the end." The 1st District was the only one of Indiana's nine congressional districts that was close to changing political hands this election, although two new House members were elected. Republican former state Sen. Erin Houchin won in southern Indiana's 9th Congressional District to replace GOP Rep. Trey Hollingsworth, who unexpectedly announced in January he wouldn't seek reelection after three terms. Voters in northern Indiana's solidly Republican 2nd District picked Rudy Yakym as the successor to GOP Rep. Jackie Walorski, who was killed along with two staff members in an August highway crash. Yakym, an executive with Elkhart logistics company Kem Krest who was endorsed by Walorski's husband, won a vote among Republican precinct committee members to replace Walorski on the ballot. With Yakym's win over Democrat Paul Steury, a high school science teacher from Goshen, and Libertarian William Henry, he could be sworn into office in the coming days to complete Walorski's term through the rest of this year and then start a full two-year term in January.

These closures are in addition to the 150 closures Bed Bath and Beyond announced last August.
GEORGIA STATE・1 HOUR AGO
ABC 7 Chicago

Under current law, there's a lifetime ban on name changes for people who have been convicted of identity theft or who are on state registries for certain crimes.
ILLINOIS STATE・2 DAYS AGO
ABC 7 Chicago

A challenge to the Illinois assault weapons ban by McHenry County has been transferred up to federal court after a hearing Monday.
MCHENRY COUNTY, IL・2 DAYS AGO
ABC 7 Chicago

People wanting to get into the cannabis business have a new chance starting Monday.
ILLINOIS STATE・2 DAYS AGO
ABC 7 Chicago

How Illinois courts are exempt from Freedom of Information Act requests

Illinois' Freedom of Information Act is a powerful tool of transparency and accountability that allows anyone to request access to government records.
ILLINOIS STATE・4 DAYS AGO
ABC 7 Chicago

A driver was killed in a crash on Interstate 294 on Monday afternoon, Illinois State Police said.
ILLINOIS STATE・1 DAY AGO
ABC 7 Chicago

I-94 reopened after crash involving as many as 20 vehicles near IL/WI border, ISP says

All closures have concluded and I-94 westbound has reopened, according to state police.
KENOSHA, WI・4 DAYS AGO