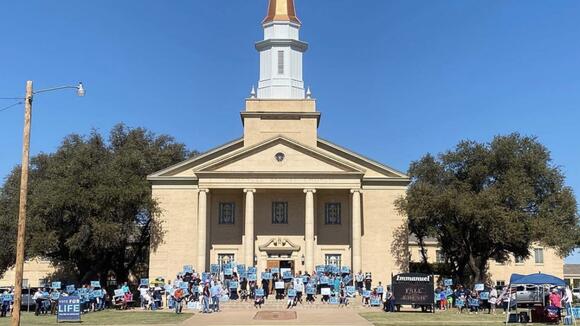 SAN ANGELO, TX – It's official, San Angelo will become a Sanctuary City for the unborn.

According to the Tom Green County Election Office, the final results for San Angelo to become a Sanctuary City for the Unborn passed with votes for 13,180 to 10,344 against.

Once the votes are canvassed by the San Angelo City Council, it will be against the law to have or assist in an abortion. The only exemption in the ordinance will be if it is a life saving measure for the mother.

Here in San Angelo there has not been an abortion clinic since 2013. This ordinance secures that one will not be coming back.

San Angelo has now joined with other major cities including Abilene and Lubbock in becoming a sanctuary city.

Others towns surrounding the Concho Valley that have already become a sanctuary city include Sterling City, Colorado City, and Big Spring.

SAN ANGELO, TX – The 2023 San Angelo Stock Show and Rodeo's Ag Public Speaking contest was held last Friday. This contest consists of students from across the state of Texas speaking in a random order over an array of topics that fall into these six categories, Agribusiness, Agricultural Policy, Agriscience, Animal Science, Plant Science, and Natural Resources. The top two in each category will move onto the final round and have a chance at becoming the Agriculture Speaking Contest Champion This year the winners of the contest were Savanna Swanson with the Corsicana FFA in the Junior Division and Aiden Hunter with the Ellis County 4-H.
SAN ANGELO, TX・1 DAY AGO
San Angelo LIVE!

SAN ANGELO, TX — A Midland woman sued Fun Town RV, 3950 US 67, for selling her what she called a ‘hopelessly flawed product” in 2018 and the court case has dragged on for five years. The jury trial may finally happen Thursday, Feb. 9. Kara Stephan...
SAN ANGELO, TX・1 DAY AGO
San Angelo LIVE!

West Texas Police Chief Arrested for Theft While in Office

ANSON, TX – A West Texas police chief was arrested on Tuesday night by the Texas Rangers. According to multiple reports, on Feb. 7, 2023, former Anson Police Chief Coy Sanchez was booked into the Jones County Jail for theft of a property between $750 and $2,500 and theft of property between $100 and $750.
ANSON, TX・1 DAY AGO
San Angelo LIVE!

URGENT: 9 Dogs to be Euthanized if Not Adopted in San Angelo

SAN ANGELO, TX – Nine shelter dogs in San Angelo's animal shelter will be put down later this week if they cannot find a home. According to the City of San Angelo, as of Tuesday, Feb. 7, the San Angelo Animal Shelter is at capacity. These nine dogs will be euthanized unless adopted, fostered or transferred to another rescue. If interested, please contact [email protected] as soon as possible.
SAN ANGELO, TX・2 DAYS AGO
San Angelo LIVE!

SAN ANGELO, TX – For about a month, across San Angelo, citizens are discussing the current homeless problem in San Angelo. During their meeting on Tuesday morning, the San Angelo City Council approved a proposal to open up a second warming shelter. During the meeting, on Feb. 7, 2023,...
SAN ANGELO, TX・2 DAYS AGO
San Angelo LIVE!

SAN ANGELO — Two San Angelo woman have been sentenced after assaulting public servants. On Wednesday, February 8, 2023, Elizabeth Shnaine Morgan and Valentina Ramos Duffley have each taken plea deals for assaulting either public servants or police officers. According to court documents, on May 31, 2022, a San...
SAN ANGELO, TX・1 DAY AGO
San Angelo LIVE!

SAN ANGELO— A San Angelo man was arrested Tuesday for assaulting a pregnant woman. According to court documents, on February 7, 2023, a San Angelo police officer was dispatched to the 2900 block of Sunset Drive for a domestic assault call. On scene, the officer learned that Daniel Ponce, 29, had grabbed a pregnant woman’s phone from her while she was calling for assistance.
SAN ANGELO, TX・1 DAY AGO
San Angelo LIVE!

SAN ANGELO — A San Angelo woman has been arrested for assaulting a police officer after getting into a fight with a boyfriend and eventually throat punching a cop. According to court documents, San Angelo police responded to the 200 block of Koberlin Street regarding a domestic disturbance call. Once on scene, officers learned that the dispute was between a woman and her boyfriend. Investigators were told at the time by police on scene that the boyfriend was being arrested for assault.
SAN ANGELO, TX・2 DAYS AGO
San Angelo LIVE!

LIVE! Daily News | The Perfect Pairing for this Valentine's Day!

Today on LIVE!, the Angry Cactus's Tim Condon sits with Matt Trammell and sips wines that will be paired with delicious meals at the Angry Cactus Valentine's Day Dinner!. The LIVE! Daily is the "newspaper to your email" for San Angelo. Each content-packed edition has weather, the popular Top of the Email opinion and rumor mill column, news around the state of Texas, news around west Texas, the latest news stories from San Angelo LIVE!, events, and the most recent obituaries. The bottom of the email contains the most recent rants and comments. The LIVE! daily is emailed 5 days per week. On Sundays, subscribers receive the West Texas Real Estate LIVE! email.
SAN ANGELO, TX・2 DAYS AGO
San Angelo LIVE!

SAN ANGELO – 16 individuals were arrested and booked into the Tom Green County Detention Center over the last 24 hours on charges including Unlawful Restraint and Possession of Marijuana. 41-year-old Jonathan Gentry was arrested by San Angelo Marshals on a warrant out of Midland County for Unlawful Restraint....
TOM GREEN COUNTY, TX・1 DAY AGO
San Angelo LIVE!

SAN ANGELO— Valentine’s Day is around the corner and keeping pets away from certain items could save their lives. Here are three key ingredients that pair nicely with Valentine’s Day: Chocolate, Flowers, and Wine. But remember, sweets for your sweetie aren’t so sweet for your pets. No...
SAN ANGELO, TX・1 DAY AGO
San Angelo LIVE!

The quarterback of the Central Bobcats signed to play with the Rams next season after debating several different offers from other schools. He said that staying close to home and watching his brothers grow up were the most important factors in his reason for remaining home. He joins the burgeoning...
SAN ANGELO, TX・1 DAY AGO