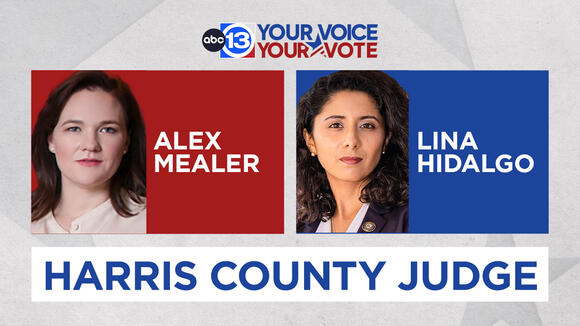 The outcome of the Harris County judge's race won't likely be known until Wednesday, as hundreds of precincts still remain uncounted. Several lawsuits over polling location hours, and a four-hour delay in the county's vote tabulation process resulted in a trickle of election results throughout the night. Just before midnight Wednesday, incumbent Judge Lina Hidalgo addressed supporters at the Harris County Democratic Party headquarters, claiming an 11,000-vote lead in the early vote totals over her Republican rival, Alexandra de Moral Mealer. "We're cautiously optimistic," Hidalgo said, before a packed crowd of Democratic leaders and supporters. An hour before, revelers at Mealer's watch party at Kirby Ice House began to dissipate when it became apparent a winner would not be declared Tuesday night. Gallery Furniture owner Jim "Mattress Mack" McIngvale, who appeared in several television ads endorsing Mealer, showed up just before 11 p.m. Tuesday. The campaign said a short time later that Mealer was done speaking for the night, and would go home to await the results. The race for Harris County judge was expected to go down to the wire after a hard-fought campaign to lead the country's third most populous county. "It's a race that's too close to call," Rice University political science professor Mark Jones said. "Hidalgo still is the favorite, in a sense that she's in a blue county and she has the support of Democratic activists, she hasn't lost that." Throughout the day Tuesday, we saw enthusiasm as voters turned out to cast a ballot in one of the most watched races in Texas. The final year of Hidalgo's first term as county judge was marred by controversy. In April, three of Judge Hidalgo's staffers were indicted as part of an investigation into how a smaller firm was awarded an $11 million COVID-19 vaccine outreach contract. Then last month, Hidalgo was unable to pass a new county tax rate when two Republican county commissioners blocked the vote by repeatedly skipping Commissioners Court. Mealer, an Army veteran and energy finance advisor, hammered Hidalgo on several issues throughout the campaign, especially on crime. Mealer said if she was elected, she would aggressively fund the criminal justice system in Harris County, and put an end to what she called a revolving door at the courthouse.

I normally would vote Democrat but I voted Republican this time for this office because I don't vote for a candidate whose staffers have been indicted. It doesn't matter to me if they are innocent or guilty this office has betrayed the trust of Harris County voters including me.

please no more Lina 🙏 she's awful and disgusting human being I hope when she needs the law on her side they don't show up..

In all, ABC13 has learned AJ Armstrong's lawyers subpoenaed nine witnesses - almost all leaders in the community - as part of their bid to keep a third murder trial in Harris County.
HOUSTON, TX・2 DAYS AGO
ABC13 Houston

Some CPS children are sleeping in hotels and offices. When the state couldn't commit to stopping that practice, a judge threatened to hold them in contempt.
TEXAS STATE・2 DAYS AGO
ABC13 Houston

HCTRA proposes to cut toll rates by 10%, offer EZ tags at no cost

If passed, the rate reduction would go into effect by Labor Day, and authorities hope "it means there's no more excuses for toll running or for evasion."
HARRIS COUNTY, TX・2 DAYS AGO
ABC13 Houston

A dog owner is happy to have her Yorkie named Lily back home after a video shows a man taking the dog and some valuables during a burglary. The man, however, is still out there.
HARRIS COUNTY, TX・12 HOURS AGO
ABC13 Houston

A warning to healthcare facilities and hospitals as dozens of people are accused of selling fake nursing diplomas, and some have been charged in the Houston area.
HARRIS COUNTY, TX・3 DAYS AGO
ABC13 Houston

Tyre Nichols' death shows reform is slow, but there has been progress, TSU professor says

"I think we're moving forward," TSU professor Dr. Howard Henderson said. "Unfortunately, there are people who have to die to see this."
HOUSTON, TX・2 DAYS AGO
ABC13 Houston

Prior to working for Harris County, Sharika Prejean was a USPS employee who allegedly stole money. "Investigators observed her to be taking the mail..." the DA's office said.
HARRIS COUNTY, TX・3 DAYS AGO
ABC13 Houston

Officials said one person was confirmed dead and a HCSO sergeant heading to work was injured in the crash due to a probable wrong way driver.
HARRIS COUNTY, TX・16 HOURS AGO
ABC13 Houston

Abdul Wasi Safi hoped to reconnect with his brother in Houston after fleeing from the Taliban. So, what's next for him?
HOUSTON, TX・4 DAYS AGO
ABC13 Houston

The district announced that all power has been restored but said that they trust parents' decision if their student is not ready to return.
DEER PARK, TX・3 HOURS AGO
ABC13 Houston

The Silver Alert was canceled on Sunday after Clarence Toles, 70. was located safely.
HARRIS COUNTY, TX・11 HOURS AGO
ABC13 Houston

Police said they are looking for the suspects involved in two separate hit-and-runs involving an electric bike and now a scooter. Both drivers allegedly failed to stop and help the victims, who both died.
HOUSTON, TX・15 HOURS AGO
ABC13 Houston

Police said three people were detained after the driver did not stop for about a mile until pulling into the grocery store's parking lot on Westheimer Road and Weslayan Street.
HOUSTON, TX・11 HOURS AGO
ABC13 Houston

Woman pleads guilty to cheating people out of $2.6 million in internet romance scams

Clean-up efforts are underway in Deer Park after Tuesday's tornado ripped through many of the town's homes and businesses.
DEER PARK, TX・14 HOURS AGO
ABC13 Houston

HPD said the two men had gotten into an argument earlier that day around noon but got into a second dispute that night when one fatally shot the other several times.
HOUSTON, TX・18 HOURS AGO
ABC13 Houston

Pedestrian taken by Life Flight after allegedly being hit by vehicle in Harris Co., deputies say

According to officials, it wasn't until crews arrived that it was decided that Life Flight would be a better option for transporting the victim.
HARRIS COUNTY, TX・18 HOURS AGO
ABC13 Houston

Two licensed counselors were completing a session with a young client when they got the alert that they were in the direct path of the tornado.
DEER PARK, TX・2 HOURS AGO
ABC13 Houston

Motorcyclist found dead in possible road rage after telling friends he was being followed: HCSO

The motorcyclist, who was in his early 30s, was out at dinner with friends, according to deputies. He left the restaurant, but then soon called his friends.
HARRIS COUNTY, TX・2 DAYS AGO