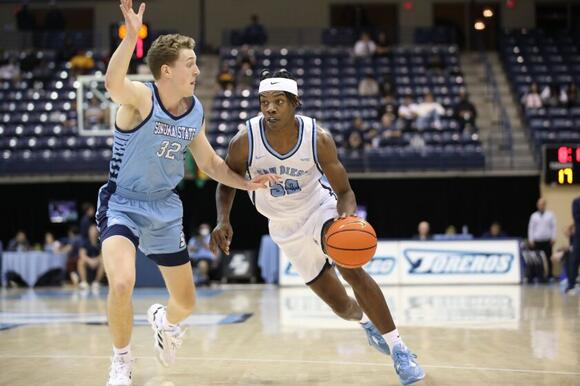 Some great defense led to a turnover and an emphatic breakaway dunk by Jordan Delaire in the second half of what would turn out to be an easy win.

If there is a snapshot of how Steve Lavin wants his University of San Diego Toreros to play this season, that was it: excellent defense turning into quick offense.

The Toreros (1-0) opened their season with an 81-59 victory over Sonoma State at Jenny Craig Pavilion on Monday night. The journey continues Wednesday night with a home game against Florida Gulf Coast.

Time will tell but history suggests that Lavin will do big things.

His teams at UCLA and St. John’s went to the NCAA tournament eight times and the former ESPN broadcaster’s resume also includes five Sweet 16s and one Elite Eight appearance along with a slew of players sent to the NBA.

The Toreros led for 38 minutes, nine seconds of the game, forced 20 turnovers with 23 points coming off of them, shot 48.3 percent from the floor, had 18 assists, finished with 22 fastbreak points and had a nice distribution of scoring with 32 points coming off the bench.

“That’s how we want to play: play great defense and get out and attack people in transition,” said senior guard Jase Townsend, who scored 16 points on 6-of-9 shooting with three 3-pointers and five assists. “We still have a lot to work on but that was a nice way to start. It was definitely fun to get out and play a real game.”

Senior guard Marcellus Earlington, who averaged a team-high 13.2 points last season, senior forward Nic Lynch, a transfer from Lehigh, and senior forward Yavuz Gultekin, a returnee from last season, were the first players off the bench in what Lavin anticipates to be a nine or 10 man rotation early in the season.

The Port Huron, Mich., native and is one of 12 new players from last season’s team, and the Toreros also have eight new staff members highlighted by former UCLA star and recruiting ace Tyus Edney.

The Toreros have an intriguing mix of shooters like Townsend, who knocked down consecutive 3-pointers to stretch the San Diego lead to double digits early in the second half, and size in Earlington (14 points, 10 rebounds), Delaire, Lynch and Williams Jr.

“Right now it’s about building that cohesion that we’ve talked about,” Lavin said. “I still think we can be more physical at the rim and I want us to continue playing downhill. The 18 assists were nice. That’s about where you want to be: in that 18-22 range. That’s what elite teams do. So, it was a nice start. We can grow from this.”

The USD women’s team rolled to a 75-47 win over Biola paced by balanced scoring from Kasey Neubert (14 points), Ayanna Khalfani (11 points) and Laura Erikstrup (11 points). The Toreros (1-0) shot 42.6 percent from the field and forced 17 turnovers. Myah Pace had 10 rebounds.

“Right now we are just learning who we are, getting a lot of combinations out on the floor,” said coach Cindy Fisher, now in her 18th season after guiding her team to the WNIT last spring. “We lost four starters so it’s just figuring out who we are right now.”

Men’s sophomore guard Wayne McKinney III (Coronado) was out due to illness. McKinney III averaged 6.6 points and 1.7 assists last season and figures to be a key player in Lavin’s rotation… Sophomore center Steven Jamerson II was on the bench in a walking boot on his left foot.

Carter is a freelance writer.