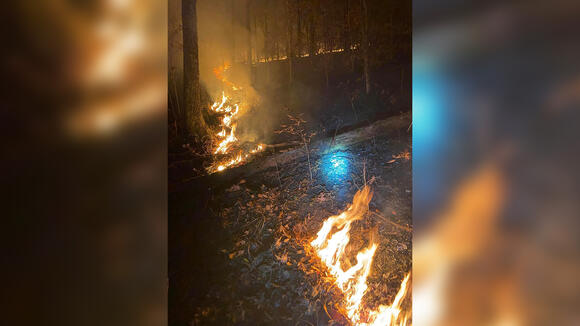 The fires, which started Saturday and continued into Sunday, have been in Rome Township along County Road 73, State Route 217 and State Route 218.

Rome VFD says several of the incidents are being investigated as suspicious or intentional. They ask anyone with information to contact the department at (740) 886-6770. Rome VFD also requests that anyone who lives or travels in the area reports suspicious activity or submits security or trail camera footage between Friday and Saturday evenings.

Rome VFD also said that as they were typing the aforementioned Facebook post , they received another call for an additional large fire in the same area.

UPDATE: (2 p.m. Nov. 25, 2022) – Lawrence County dispatchers say crews have extinguished a fire that happened at a home in Ironton this afternoon. According to dispatchers, the fire broke out in a garage in the 2500 block of South 11th Street around 12:10 p.m. Friday, Nov. 25. Dispatchers say no injuries were reported. […]
IRONTON, OH・2 DAYS AGO
WOWK 13 News

Fundraiser for 2 shot and killed outside Ohio bar passes goal

PORTSMOUTH, OH (WOWK) – The Toro Loco restaurant in Portsmouth, Ohio says they’ve already surpassed their fundraising goal of $4,000 to help pay for the funeral expenses of two employees that were shot and killed outside of a bar on Sunday. The two victims, identified as 40-year-old Abraham Pucheta and 35-year-old Javier Luna, were shot […]
PORTSMOUTH, OH・2 DAYS AGO
WOWK 13 News

Windy End to the Weekend in West Virginia, Ohio, and Kentucky

(WOWK) – It was a very windy day to close out the weekend in Ohio, West Virginia and Kentucky. Breezy conditions will last through the evening hours and overnight, but Strom Tracker 13 Meteorologists say that the strongest winds are behind us now. The strongest gust occurred just before noon in Huntington at 54 MPH. […]
OHIO STATE・16 HOURS AGO
WOWK 13 News

1 dead after truck hits pedestrian on US-23 in Scioto County, Ohio

SCIOTO COUNTY, OH (WOWK) — One person is dead after a driver struck a pedestrian that walked into the roadway on US-23 south of Cook Road in Scioto County, Ohio. The Ohio State Highway Patrol says this happened just after 6:15 p.m. They say the driver of the truck was going southbound when the pedestrian […]
SCIOTO COUNTY, OH・4 DAYS AGO
WOWK 13 News

HUNTINGTON, WV (WOWK) — The 64th Annual Model Railroad Show, hosted by the Appalachian Model Railroad Society, is beginning on Friday. A flyer for the event says it is happening at the Mountain Health Arena in Huntington. It starts on Friday and goes on until Sunday. The times are: Friday: 5 p.m. – 8 p.m. […]
HUNTINGTON, WV・3 DAYS AGO
WOWK 13 News

HUNTINGTON, WV (WOWK) – A local tradition is returning to the Tri-State! The Huntington Turkey Trot is back for its 16th year and has returned to an in-person event at Ritter Park! The annual 5K run/walk began at 9 a.m. this morning, Nov. 24, 2022, for a good cause. The proceeds from the event help […]
HUNTINGTON, WV・3 DAYS AGO
WOWK 13 News

GREENUP COUNTY, KY (WOWK) — On Tuesday, the Greenup County Sheriff’s Office arrested multiple people for drug trafficking. GCSO says they stopped a car on Main Street in Greenup, and the driver, Sarah James, 42, of Hood Run Road in Greenup, Kentucky, had a suspended license. An occupant of the vehicle, Carl James McKinney, of […]
GREENUP, KY・4 DAYS AGO
WOWK 13 News

PORTSMOUTH, OH (WOWK) –Winterfest at Market Square in bringing all sorts of winter wonderland fun to Portsmouth, Ohio. Boneyfiddles Market Square has ice skating, millions of lights, places to shop for gifts, carriage rides and more. There’s even coffee and hot chocolate. They are closed for Thanksgiving, but the fun is back on Thanksgiving. You […]
PORTSMOUTH, OH・4 DAYS AGO
WOWK 13 News

Many communities are hosting Christmas Parades in the weeks ahead. This weekend the City of Williamson in Mingo County, WV will have a traditional holiday celebration, including a parade. The Grand Marshal this year is a woman whose life changed forever at that very parade decades ago.
WILLIAMSON, WV・4 DAYS AGO
WOWK 13 News

In a rematch of last year's Class AAA championship game, it was the Highlanders who had the last laugh this time around.
HUNTINGTON, WV・1 DAY AGO
WOWK 13 News

(WOWK) — Lots of great college football games will be played in the region with Marshall, Kentucky and Ohio State all playing at home. WVU is on the road and Ohio University played several days ago. Starting with the Marshall home game against Georgia State: Should be dry. All models hold the rain out of […]
MORGANTOWN, WV・4 DAYS AGO
WOWK 13 News

The Herd finish the regular season with an 8-4 record and a 5-3 record in the Sun Belt.
HUNTINGTON, WV・1 DAY AGO