Citadel’s Flagship Hedge Fund Is Up 30% This Year. Why Is Ken Griffin's Fund Doing Better Than Most? 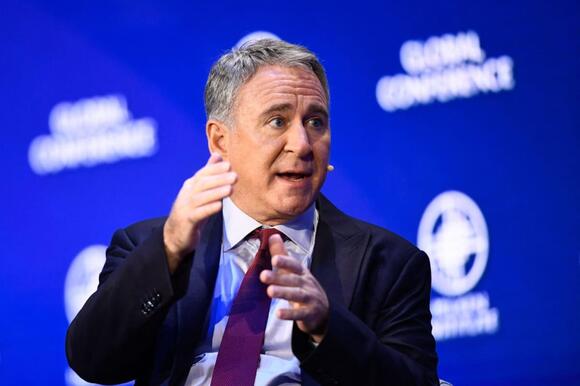 Ken Griffin's hedge fund is up over 30% this year, even while the broader market has sunk double digits over the same timeframe.

Ken Griffin's Citadel Is Having a Great 2022

Citadel's flagship hedge fund has seen outstanding returns this year. In October alone, the fund was up 1.5%. And in September, the fund had reported 2.5% growth.

A contributor to the hedge fund's solid performance this past month was the rebound of the S&P 500, which closed up 8% in October. However, the index has still accumulated losses of more than 20% YTD.

Peer funds such as Millennium and Balyasny have delivered YTD gains of 10% and 7.8%, respectively. While solidly outperforming the general market, these funds are getting walloped by Citadel’s flagship fund.

Why Is Ken Griffin's Fund Doing Better Than Most?

A few weeks ago, Ken Griffin gave an interview with CNBC during the CNBC Delivering Alpha conference. He was asked what the key to Citadel's success this year had been.

Griffin said that his mindset in running a large asset management firm such as Citadel required a very sharp trading posture. The upshot, in Griffin’s case, is a fluid portfolio with very active trading in the foreign exchange market, 10-year bond, and commodities.

However, according to Citadel's CEO, the key differentiator that has provided Citadel with a competitive advantage is the collaboration and communication power of his team, who are all working out of the same physical office.

Griffin points out that many of his competitors work remotely and find it more difficult to quickly assimilate macroeconomic news and company earnings reports.

Griffin As A Critic Of Speculative Assets

Ken Griffin recently spoke on speculative assets, specifically honing on the meme stock craze and the rise of NFTs (non-fungible tokens) and cryptocurrencies.

Griffin sees the declining performance of these speculative assets this year as a healthy trend for the economy. He blames several related speculative bubbles on the US government's response to COVID.

A critic of government stimulus given after the worst of Covid had passed, Griffin said that, in many cases, stimulus checks ended up in speculative assets like NFTs, cryptocurrencies, and meme stocks.

It is worth noting that Citadel Securities' role in the GameStop ( GME ) - Get Free Report short squeeze event has been a point of controversy. Citadel’s involvement, in fact, was a driver of payment for order flow (PFOF) coming under scrutiny at the federal level .

Ken Griffin's Citadel Securities is one of the largest market makers in the world and has PFOF agreements with some electronic brokerages.

And in early 2021, Citadel found itself embroiled in a PFOF issue involving Robinhood. The topic was and remains highly debated among retail investors.

Ken Griffin has denied any misconduct in the event, and in November 2021, a U.S. District Court dismissed a class action suit involving the companies, ruling that there is no evidence that Robinhood ( HOOD ) - Get Free Report and Citadel had colluded.

During a recent interview with CNBC, Griffin was asked about the issue. He claimed that he was aware that there is or was a significant chance that the order flow payment would be prohibited and that if it was, he would adapt.

The Citadel Securities founder also said that PFOF has allowed large electronic brokerage firms to not charge commission fees, which many retail investors appreciate. If PFOF were to be banned, it would likely result in higher commissions being charged - something SEC Chairman Gary Gensler and the electronic brokerage community should take notice of.

Since GameStop's historic short squeeze two years ago, the markets have undergone plenty of scrutiny. Here's what you need to know about the short squeeze's effects on stocks.
7 HOURS AGO