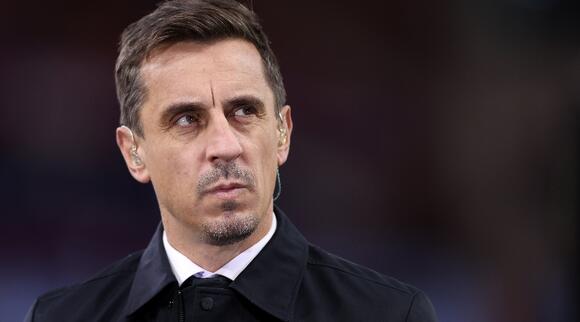 Former Manchester United and England right-back Gary Neville was given a grilling for accepting a commentary role at the forthcoming World Cup in Qatar as he hosted BBC satirical show Have I Got News For You on Friday night.

Neville, who was presenting the comedy quiz for the first time, appeared extremely uncomfortable as the topic of Qatar was raised amid controversy over the nation's human rights record, treatment of LGBTQIA+ fans and the deaths of thousands of migrant workers during the contstruction of the stadiums.

"You know David Beckham, don’t you? He's going, isn't he? How much is he being paid?" Neville was asked by comedian Paul Merton.

"I don’t know," the former footballer replied. "More than me!"

Neville, who will work as a pundit for state broadcaster beIN SPORTS at the World Cup, was already squirming and worse was to come for the 47-year-old.

"The elephant in the room is you’re commentating there. What’s the defence?" Private Eye editor Ian Hislop asked Neville.

"Yeah, I’m commentating," the former United defender replied. "You’ve got a choice, haven’t you? My view always has been that you either highlight the issues and challenges in these countries and speak about them, or you basically don’t say anything and stay back home and don’t go. And I think we should challenge them."

But Hislop was not impressed. "The other option is you stay at home and highlight the abuses. You don’t have to take the Qataris’ money. It’s just not a very good defence," he said.

That drew applause from the audience, as did further comments from guest Richard Madeley and Hislop again, with Neville clearly uncomfortable and also visibly upset by the criticism.

"You've got people like Robbie [Williams] going out there to sing, which I must say I'm very surprised about given all the comments that Robbie Williams has made in the past about gay rights," Madeley said.

"The fact that he’s going out there to sing is extraordinary."

Sir Jim Ratcliffe looks to remain the front-runner to take over at United, after the Glazers put the club up for sale in November
5 HOURS AGO
FourFourTwo

The Reds fell to their third defeat in four Premier League games, losing 3-0 to Wolves on a miserable afternoon at Molineux
1 DAY AGO
FourFourTwo

Louis Tomlinson recalls randomly bumping into Bryan Robson in a bar in South America: 'He was a bit drunk'

The former Manchester United midfielder must've timed his global ambassadorial duties to match up with a One Direction concert...
2 DAYS AGO
FourFourTwo

The Gabon international won't be playing in Europe for the rest of the season, after Graham Potter opted for three of his new arrivals instead
2 DAYS AGO
FourFourTwo

Bergiristain got his own-back on McClair years later by helping City win all those trophies, at United's expense
2 DAYS AGO
FourFourTwo

Paris Saint-Germain have confirmed they are in talks with Lionel Messi over an extension, amid reports he could leave this summer
9 HOURS AGO
FourFourTwo

The Blues spent well over £300m last month, bringing in eight players – among them Enzo Fernandez and Mykhailo Mudryk
1 DAY AGO
FourFourTwo

Ranked! Every £100m+ player from worst to best

Cristiano Ronaldo scores first goal for Al-Nassr in Saudi Arabia... and it's a penalty