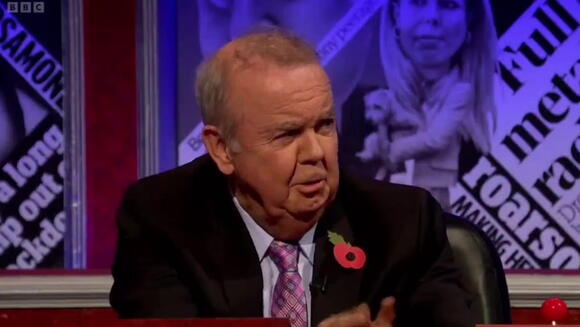 Ian Hislop is being praised for his “bang on” comments to Gary Neville on Have I Got News For You .

The satirical panel show’s latest episode was broadcast on Friday (4 November), and was guest hosted by the retired footballer.

When the subject of the forthcoming World Cup in Qatar came up, Hislop did not hold back.

When the former Manchester United pro, who is commentating at the sporting contest, asked Hislop if “it’s coming home”, he replied: “What, your reputation?”

The decision to attend the contest in Qatar has been branded “unacceptable” due to the country’s human rights record as well as the controversy surrounding migrant workers who were injured in the run-up to the sporting event.

Many are boycotting the event due to the coutry’s stance on the LGBT community , and are calling out Fifa for its “defeaning silence” on the matter as the contest grows nearer.

Hislop, showing his serious side, said: “The others have been very gentle with you, Gary, but the elephant in the room is still there. You’re commentating there, aren’t you?”

When Neville replied in the affirmative, Hislop asked him what his “defence” was, to which he said: “Well, you’ve got a choice, I think, haven’t you?”

Hislop fired back: “What, going or not going?”

Neville defended his decision to to go to Qatar for work, stating: “My view always has been, you either highlight the issues and challenges in these countries, and speak about them, or you basically don’t say anything and stay back home, and don’t go. And I’ve always said we should challenge them.” 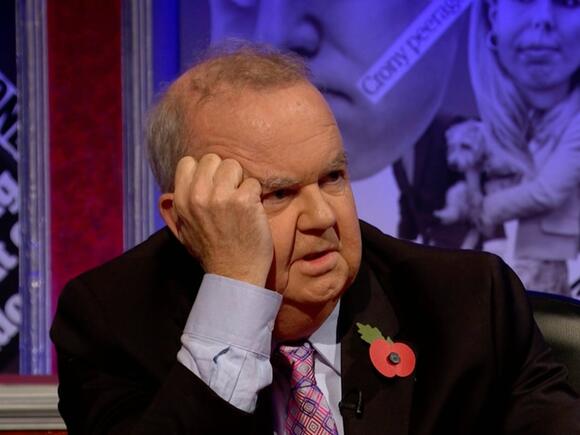 However, Hislop was not finished. He told Neville: “There’s another option: you stay at home and highlight the abuses. You don’t have to go and take the Qataris’ money… It’s just not a very good defence.”

Hislop was praised by viewers of the show for highlighting Neville’s “hypocrisy”.

“I like Gary Neville, but Ian Hislop and co on #HIGNFY pointing out his hypocrisy in going to the World Cup is bang on,” one viewer wrote, adding: “These people need to just be honest and say they are going for the money and stop pretending they care about the human rights issues, no one is being fooled.”

Another said: “Well done, Ian Hislop and co, for highlighting the hypocrisy of @GNev2 and the others making money off of the #QatarWorldCup2022 whilst pretending they give a shit about the human rights abuses.”

An additional viewer of the show stated: “Good on Ian Hislop for calling out Gary Neville on Qatar. I like Neville but unless his commentary contains constant criticism of Qatar and shines a bright light on its human rights abuses, he hasn’t got a foot to stand on.”

Journalist Jay Motty added: “Ian Hislop is bang on. Stinks of hypocrisy and Neville knows it.”

Later during BBC One’s Friday schedules, chat show host Graham Norton ripped former health secretary Matt Hancock to shreds over his forthcoming appearance on the 2022 series of I’m a Celebrity... Get Me Out of Here .

The Fifa World Cup is taking place in Qatar between 20 November and 18 December.

Liverpool manager Jurgen Klopp insists he has not become a bad coach overnight but will not think about his legacy at the club until he has retired.Inconsistent results this season have left his side ninth in the Premier League table, 10 points adrift of fourth-placed Manchester United with a match in hand, having already relinquished their hold on the Carabao Cup.But last season they were two games away from winning an unprecedented quadruple and Klopp is keen to put things in perspective.“I knew it would be difficult, absolutely. Last year was super-intense, much longer than we could have expected because...
7 HOURS AGO
The Independent

Jurgen Klopp reflects on his ‘legacy’ and Liverpool’s golden era

Jurgen Klopp has declared that Liverpool’s troubled season has not suddenly turned him into a bad manager and insisted that in the 2040s people will look back on his reign at Anfield as a golden era.Liverpool are ninth in the Premier League and, after winning both domestic cups last season, will be out of both by the end of January if they are beaten at Brighton on Sunday.But Klopp, who thinks he was overpraised in the good times, said his shoulders are big enough to take the criticism as he reflected on how there would be calls for another...
7 HOURS AGO
The Independent

Apt a tribute as it was, it probably was not the one Paul Ince wanted. As a Manchester United great returned to Old Trafford, his Reading side were condemned to defeat by a defensive midfielder who showed an eye for goal. It was a hallmark of Ince in his playing days and, when Reading were producing a display of admirable defiance, Casemiro delivered a five-minute brace. The breakthrough featured a late surge into the box that was reminiscent of the powerhouse in the United midfield three decades ago. The general feel, of a midfielder grabbing the game by the...
7 HOURS AGO
The Independent

Roberto De Zerbi challenged Solly March to build on his scintillating recent form and establish himself as an attack-minded, goalscoring winger.The 28-year-old has netted three times in Brighton’s last three Premier League games, including a brace in the 3-0 win against Liverpool earlier in January to take his tally for the season to a career-best four goals.March has been one of the Premier League’s most improved players since De Zerbi took charge in September.The Italian has used him in a more attacking role than was typical under his predecessor Graham Potter, and ahead of Sunday’s rematch with the Reds in...
7 HOURS AGO
The Independent

What the papers say – January 29

The front pages focus on asylum seekers, an Arctic blast and a startling Government admission on the Grenfell tragedy.The Sunday Telegraph says the Government will publish an urgent and emergency care plan on Monday, as the Health Secretary admitted that there was “no quick fix” to the serious pressures facing the NHS.The front page of today's Sunday Telegraph:''Hospitals at home' plan to save NHS'#TomorrowsPapersTodaySign up for the Front Page newsletterhttps://t.co/x8AV4Oomry pic.twitter.com/tthyIaVxrF— The Telegraph (@Telegraph) January 29, 2023House Secretary Michael Gove tells The Sunday Times that “faulty and ambiguous” Government guidance allowed the Grenfell Tower tragedy to occur.Sunday Times: Gove -...
1 HOUR AGO
The Independent

Casemiro scored a magnificent brace before Fred flicked home audaciously as Manchester United’s Brazilian stars sparkled in Saturday evening’s FA Cup win over Reading.Erik ten Hag surprisingly only made one alteration for a seemingly straightforward fourth-round assignment that his side initially made hard work of at Old Trafford.But second half samba magic in the Manchester rain sealed United a 3-1 victory on a night when Amadou Mbengue grabbed Reading a consolation after Andy Carroll was sent off.Marcus Rashford saw a goal ruled out for offside in an opening period that saw United fail with their 15 shots and nearly go...
7 HOURS AGO
The Independent

Boris Johnson was reportedly told to stop asking Richard Sharp for “advice” about his “personal financial matters”, just days before Mr Sharp was announced as the new BBC chairman.According to The Sunday Times, then-prime minister Mr Johnson was warned by officials on 22 December 2020 to stop discussing his financial arrangements with Mr Sharp, who was due to be announced as BBC chair on 6 January 2021.The former banker has been facing calls to stand down after it emerged that in late 2020 he had introduced Sam Blyth to cabinet secretary Simon Case to discuss whether Mr Blyth, a distant...
9 HOURS AGO
The Independent

Erik ten Hag has no complaints about the relentless fixture schedule as the Manchester United manager looks to end his first season at the club with silverware.The Dutchman took over following a wretched 2021-22 season with the Old Trafford giants in the midst of their worst trophyless spell in 40 years.Ten Hag has overseen an impressive upturn, with the club vying for glory in all three cup competitions after bouncing back from last weekend’s 3-2 loss to Premier League leaders Arsenal.🗣️ “We’re on the march…”#MUFC || #FACup pic.twitter.com/12ephCJG1O— Manchester United (@ManUtd) January 28, 2023Wednesday’s 3-0 semi-final first-leg win at Nottingham...
6 HOURS AGO
The Independent

It was all hands on deck on a former Royal Yacht as seven teams of sports stars and athletes rowed hundreds of thousands of metres between them to raise money for Doddie Weir’s charity.Olympic gold medal winner Dame Katherine Grainger and former Scotland rugby captain Rob Wainwright were among the participants battling it out on rowing machines on board the Royal Yacht Britannia in Leith on Saturday.The challenge, which was joined by several other teams virtually, was to see who could row the furthest between 10am and 1pm.10 minutes to go in the Britannia Regatta - the noise is ramping...
14 HOURS AGO
The Independent

Tottenham Hotspur’s Son Heung-min returned to form with two goals in his side’s 3-0 defeat of second-tier Preston North End in the FA Cup fourth round and Casemiro also grabbed a brace in Manchester United’s 3-1 win over Reading on Saturday.Fellow Premier League sides Leicester City, Leeds United and Southampton also reached round five on a shock-less day.Top flight Fulham were held to a 1-1 home draw by second-tier Sunderland at Craven Cottage.South Korean Son has endured a lean season but made the difference with two superb goals after the break as the visitors moved comfortably through to the...
7 HOURS AGO
The Independent

Fulham and Sunderland must do it all over again in a fourth round FA Cup replay after an absorbing 1-1 draw at Craven Cottage.Tom Cairney’s delightful equaliser cancelled out a sixth minute opener from Jack Clarke for the visitors.Marco Silva’s side made life difficult for themselves following Issa Diop’s early error, with Clarke calmly rolling the ball past Marek Rodak.Cairney’s skillful strike earned a replay, but the Black Cats thought they had scored the winner when 15-year-old Christopher Rigg had the ball in the back of the net in the 90th minute, but the goal was rightly ruled out...
12 HOURS AGO
The Independent

Nicolo Zaniolo is poised to stay at Roma after snubbing Bournemouth, his manager Jose Mourinho has confirmed.The Portuguese boss said it was “unfortunate” that the Italian midfield would likely continue his career in the eternal city, despite the Cherries tabling an offer in the region of €30m (£26.3m) for the 23-year-old.Bournemouth had identified Zaniolo after encountering trouble signing Nicolas Jackson, 21, from Villarreal.“Zaniolo has been saying for a month that he wants to leave. Unfortunately, it looks like I was right,” said Mourinho, who predicted the player wouldn’t leave due to offers being “unworthy” of both the player and...
11 HOURS AGO