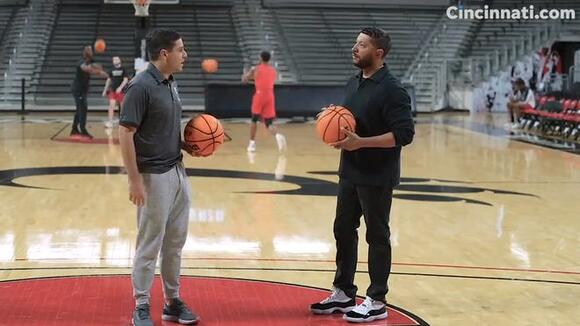 For hardcore college basketball fans, the days and nights leading up to the start of the season can feel like forever.

Cincinnati Bearcats basketball:The Enquirer sits down with Wes Miller as he prepares for season No. 2 at Cincinnati

"Absolutely. Yeah. Sense of urgency, the butterflies. Man, the first day of practice or going into every practice, I feel those," Miller said. "Certainly before the first game or before any game I have them. It's like being a kid. One of the great parts about coaching is you get those. People talk about it, but it's almost like that competitive drug. The way it makes you feel, right? I mean, it's really special. It's really unique. And the day that I don't have nerves or I'm not excited and can't sleep the night before the game, boy, that will be the day I stop coaching."

Miller, 39, has been immersed in the sport his entire life. He won a national championship 17 years ago as a player at North Carolina. And on Monday, Miller will begin his 12th season as a college head coach and his second campaign at Cincinnati. That brings an entirely different level of anxiousness.

"I think the players would like (the games) to start," he said. "I think coaches, we're like, 'Can we get two more months of practice?'"

Miller and the Bearcats will open the season against Chaminade at 7 p.m. Monday at Fifth Third Arena. They will do it without having had any exhibition games.

Miller doesn't like exhibition games. His teams haven't participated in any since early in his 10-year tenure as the head coach at UNC Greensboro.

Instead the second-year Cincinnati coach prefers scheduling closed-door scrimmages to prepare for the start of the season.

"I've been so adamant about it," he said. "... If you're going to have the ability to do two scrimmages behind closed doors – it's not a game – against a Division I opponent, it's worth five practices. I've been so adamant about utilizing that as much as I possibly can over the course of my head-coaching career, and I wish we could do more of it."

"It's not a real game, so it doesn't bring some of the other stuff involved," Miller said. "You can try different combinations. You can try different things that maybe worked in practice or didn't work against yourselves and may work against somebody else. You can learn so much from those scrimmages. I really value the ones that we're allowed to do. If they ever let me make decisions for college basketball, we'd be allowed to do four or five or six of them in the preseason.

"You learn so much more when you see another jersey in one day than you do in four or five days of practicing versus yourself."

Cincinnati faced the Bobcats Oct. 16 in Athens, while the Bearcats' scrimmage against the Boilermakers took place Saturday at a neutral site in Indianapolis. Miller said he was able to tinker with a projected starting lineup against Purdue.

But Miller's true, new "positionless" lineup won't be revealed until Monday. That gives Miller a few more days to iron out any kinks before the "real" games start.

"Are we exactly where I want to be in every facet of how we're playing, every facet of basketball? No. We're not," Miller said. "We've got six new players. We've adjusted some style-of-play stuff. So there's some things that are a work in progress. But nothing is due to our players not bringing it every day or doing what they're supposed to do. We've got another week to kind of get some things in place. So, no, I'm not 'happy.' Do I wish we were further along? Sure. But I think we all kind of feel certain that if we'll continue to do what we're doing every day and stay with the right approach, it's got a chance to be a pretty good team."