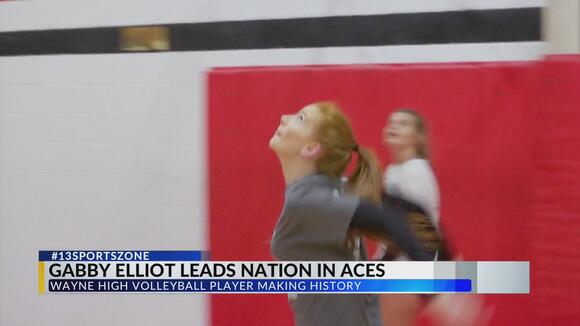 She broke 1,000 kills, and clinched over 200 aces; she now leads the nation in serving aces, the second place person has 198.

“Finally hit that 1000 mark last night,” Elliott said. “I found out after the game. I was kind of shocked that I got there because coming into high school I never thought I’d hit that mark. So to be a junior, and to finally hit that milestone I set for myself, it’s been exciting.”

She says the outpouring of support has been incredible.

“It’s been insane,” Elliott said. “I’ve had so many people congratulate me and my coaches… I thank my coaches.. my team… and everyone who’s been there for me and supported me along the way.”

Wayne is headed to the sectional championship match which will be played Thursday night against the winner of Scott/Chapmanville.

The Herd finish the regular season with an 8-4 record and a 5-3 record in the Sun Belt.
HUNTINGTON, WV・1 DAY AGO
WOWK 13 News

In a rematch of last year's Class AAA championship game, it was the Highlanders who had the last laugh this time around.
HUNTINGTON, WV・1 DAY AGO
WOWK 13 News

Windy End to the Weekend in West Virginia, Ohio, and Kentucky

(WOWK) – It was a very windy day to close out the weekend in Ohio, West Virginia and Kentucky. Breezy conditions will last through the evening hours and overnight, but Strom Tracker 13 Meteorologists say that the strongest winds are behind us now. The strongest gust occurred just before noon in Huntington at 54 MPH. […]
OHIO STATE・14 HOURS AGO
WOWK 13 News

DUNBAR, WV (WOWK) – Today isn’t just about the Thanksgiving dinner, football is also a huge part of the holiday tradition, and in the City of Dunbar truer words have never been spoken! Thanksgiving Day marks the annual Commode Bowl, and this year is the 74th year the Hillside Rams and the River Rats have […]
DUNBAR, WV・3 DAYS AGO
WOWK 13 News

(WOWK) — Lots of great college football games will be played in the region with Marshall, Kentucky and Ohio State all playing at home. WVU is on the road and Ohio University played several days ago. Starting with the Marshall home game against Georgia State: Should be dry. All models hold the rain out of […]
MORGANTOWN, WV・4 DAYS AGO
WOWK 13 News

KANAWHA COUNTY, WV (WOWK) — Vaughn Shafer, who served as the Kanawha County Building Commissioner since 2011, passed away, county officials announced on Sunday. “The Commission is saddened to learn of the passing of Kanawha County Building Commissioner Vaughn Shafer,” officials say. ” … Our thoughts are with his wife Sylvia and his entire family.” […]
KANAWHA COUNTY, WV・18 HOURS AGO
WOWK 13 News

PRESTONSBURG, KY (WOWK) — On Sunday, Prestonsburg Fire Department set up a flag to honor a retired Kentucky State Police trooper who recently passed away. KSP Trooper (Ret.) Damon Duane Gayheart passed away at the age of 60 on Thursday, Nov. 24, 2022. His obituary says he is survived by his mother, wife, children, grandchildren […]
PRESTONSBURG, KY・14 HOURS AGO
WOWK 13 News

HURRICANE, WV (WOWK) — The Saturday after Thanksgiving is a day to celebrate and support small local businesses. One way local residents showed their support this year is by attending vendor events like “Yuletide in the Park.” “Everybody has something special,” said Tonia Crawford, Mrs. Yuletide 2022. “There is makeup, bath bombs, everything and then […]
PUTNAM COUNTY, WV・16 HOURS AGO
WOWK 13 News

CHARLESTON, WV (WOWK) – Are you cooking a turkey for the first time? Well, way back in 1987 a young reporter named Mark Curtis was assigned to do a story on how to cook a turkey, for his then station WEAR-TV3 in Pensacola, Florida. You may know him as our very own chief political reporter and Inside […]
CHARLESTON, WV・3 DAYS AGO
WOWK 13 News

HUNTINGTON, WV (WOWK) — The 64th Annual Model Railroad Show, hosted by the Appalachian Model Railroad Society, is beginning on Friday. A flyer for the event says it is happening at the Mountain Health Arena in Huntington. It starts on Friday and goes on until Sunday. The times are: Friday: 5 p.m. – 8 p.m. […]
HUNTINGTON, WV・3 DAYS AGO
WOWK 13 News

SISSONVILLE, WV (WOWK) — The holiday season is right around the corner, and local organizations are collecting donations to help those in need. One way to help is through “The Hillbreed Family Memorial Coat & Toy Drive.” The fundraiser, which is hosted every Saturday after Thanksgiving, is rooted in a 30-year-old tradition started by the […]
SISSONVILLE, WV・17 HOURS AGO
WOWK 13 News

On the eve of Small Business Saturday, people like Purple Moon co-owner Chuck Hamsher have been getting in on some of the extra business traffic early.
CHARLESTON, WV・2 DAYS AGO
WOWK 13 News

UPDATE (Nov. 27, 2022, at 12:15 p.m.): The Charleston Police Department (CPD) says an accident that happened on I-77 Sunday morning left one person with life-threatening injuries and two family dogs deceased. CPD says a family of four was heading south on I-77 when the driver entered the curve at the I-77S/I-64W split at Mile […]
CHARLESTON, WV・22 HOURS AGO
WOWK 13 News

LOGAN COUNTY, WV (WOWK) — A woman was arrested in Logan County following a hit-and-run crash on Friday, according to the Sheriff’s Office. Deputy C.L. Carter responded to the Crawley area about a hit-and-run crash, the Logan County Sheriff’s Office says. After an investigation, Amanda Tipton (Collins) was arrested for the alleged crimes: Driving with […]
LOGAN COUNTY, WV・19 HOURS AGO
WOWK 13 News

Fundraiser for 2 shot and killed outside Ohio bar passes goal

PORTSMOUTH, OH (WOWK) – The Toro Loco restaurant in Portsmouth, Ohio says they’ve already surpassed their fundraising goal of $4,000 to help pay for the funeral expenses of two employees that were shot and killed outside of a bar on Sunday. The two victims, identified as 40-year-old Abraham Pucheta and 35-year-old Javier Luna, were shot […]
PORTSMOUTH, OH・2 DAYS AGO
WOWK 13 News

Toy Expert Weighs in on This Years Top Trends

CHARLESTON, WV (WOWK) – With the holiday season underway, it’s the perfect time to take a look at some of the hottest toys and trends this year. We spoke with toy trends specialist, Jennifer Lynch, who gave us some fun ideas and a heads up on great deals for the holiday season.
CHARLESTON, WV・3 DAYS AGO
WOWK 13 News

UPDATE: (2 p.m. Nov. 25, 2022) – Lawrence County dispatchers say crews have extinguished a fire that happened at a home in Ironton this afternoon. According to dispatchers, the fire broke out in a garage in the 2500 block of South 11th Street around 12:10 p.m. Friday, Nov. 25. Dispatchers say no injuries were reported. […]
IRONTON, OH・2 DAYS AGO
WOWK 13 News

Many communities are hosting Christmas Parades in the weeks ahead. This weekend the City of Williamson in Mingo County, WV will have a traditional holiday celebration, including a parade. The Grand Marshal this year is a woman whose life changed forever at that very parade decades ago.
WILLIAMSON, WV・4 DAYS AGO