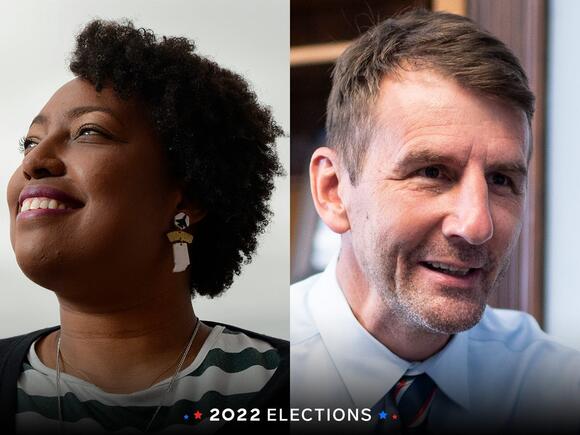 Democrats have nearly a century-old winning streak in the district, but it could become Republican territory for the first time since Herbert Hoover was president.

Mrvan, first elected to the US House in 2020, is no stranger to politics . He served as township trustee in North Township from 2005 to 2021. Prior to his role as trustee, Mrvan worked as a licensed mortgage broker and pharmaceutical sales representative.

Mrvan is a member of the House Committee on Education and Labor and chairs the Subcommittee on Technology Modernization. The Democrat from Hammond, who supported President Joe Bidens' infrastructure bill, also co-chairs the Congressional Steel Caucus.

Green , Mrvan's challenger, is a certified flight instructor and a commercial pilot — she's one of a relatively small number of female Black professional pilots in the nation. A graduate of the US Air Force Academy, she currently serves in the Indiana Air National Guard. During her 12-year-long career in the military, Green was deployed to Baghdad in support of Operation Iraqi Freedom.

Green founded MissionAero Pipeline, a college and career preparation non-profit with a focus on aerospace, science, technology, engineering and math.

She listed a free-market economy and limited government regulations as issues important to her on her campaign website. Green defeated her GOP opponents in a four-way primary, narrowly overcoming second-place finisher Jesse Reising by fewer than than 1,000 votes.

Abortion access is an issue where Mrvan and Green hold starkly opposing views.

"I have seen their rights taken away. I want to make sure that no one, not a policy or politician, gets in the way of healthcare choices and my daughter's choices as they are going forward," Mrvan said in an interview with local media.

Green, conversely, has said that "empirical evidence shows that life begins at conception and that a child in the womb is a distinct, developing, whole human being."

Joe Biden had a 9 percentage point margin of victory over President Donald Trump under the district's previous boundaries in 2020 before it was redrawn to add more of LaPorte County's western area in redistricting following the 2020 Census, making it slightly less Democratic-leaning.

As of November 1, more than a dozen super PACs, national party committees, politically active nonprofits, and other non-candidate groups have together spent more than $12 million to advocate for or against candidates in this race, including during the race's primary phase. Congressional Leadership Fund, a pro-Green hybrid PAC led by national Republicans, alone accounts for about half of that spending.

The race between Mrvan and Green is rated as "lean Democratic" by Inside Elections , a "toss-up" by The Cook Political Report , and a "toss-up" by Sabato's Crystal Ball at the University of Virginia Center for Politics .

Arizona television personality Kari Lake's first foray into politics failed in a spectacular manner, in large part because she alienated a substantial segment of voters in her own party who either flipped to her opponent or chose to skip voting for anyone for governor. That's according to a post-election analysis...
MARICOPA COUNTY, AZ・2 DAYS AGO
Benzinga

Sen. Ted Cruz (R-Texas) shared his views on why it was difficult for members of the Republican Party to have an opposing view with former U.S. President Donald Trump in an interview at the 2022 Texas Tribune Festival, held in September. What Happened: Trump is a "unique" character, according to...
TEXAS STATE・1 DAY AGO
Business Insider

Republicans have indicated that they're willing to hold off on raising the debt ceiling in order to secure cuts to Medicare and Social Security.
MASSACHUSETTS STATE・2 DAYS AGO
Business Insider

Musk's visit to the Hill comes less than 2 weeks before the GOP-led House is set to hold a hearing on Twitter's content moderation practices in 2020.
18 HOURS AGO
Business Insider

Trump rivals are delaying declaring their candidacies because he's doing a good job of tripping himself up, report says

Donald Trump's 2024 campaign has gotten off to a faltering start, giving rivals a good reason not to jump in too early.
FLORIDA STATE・2 DAYS AGO
Business Insider

House Speaker Kevin McCarthy finally won his battle against letting members vote remotely. It could cost him critical GOP votes when he needs it most.

The House implemented proxy voting in the 116th Congress as a result of the COVID-19 pandemic. It's gone now, and it could be costly for the GOP.
INDIANA STATE・1 DAY AGO
Business Insider

Matt Gaetz says it's fine that fellow Kevin McCarthy speaker vote rebels got plum gigs and he seemingly got nothing else out of the leadership tussle.
FLORIDA STATE・1 HOUR AGO
Business Insider

Democrats are facing down a tough decision in Arizona, and Senate Majority Leader Mitch McConnell is having fun with it.
ARIZONA STATE・2 DAYS AGO
Business Insider

A letter from Rep. Cory Mills welcomed his colleagues to a "mission-oriented" Congress — along with the gift of an inert grenade.
FLORIDA STATE・14 HOURS AGO
Business Insider

"What, do you want to mic us up too?" asked GOP Rep. Dan Crenshaw, who worries expanded C-SPAN would mean more political theater.
WISCONSIN STATE・7 HOURS AGO